A couple more dollars of the price of a barrel of oil is sending shares of WPX Energy, Inc., Laredo Patroleum, Inc., LINN Energy, LLC, and SM Energy Company to the floor today.

What: Shares of U.S.-based oil and gas producers are all taking yet another beating from the market today as the price of West Texas Intermediate, the benchmark price for domestic crude, dropped just barely under $27 per barrel as of noon today. While the number of companies that have dropped more than 10% is almost too large to mention in a single post, WPX Energy (WPX), Laredo Petroleum (LPI -2.02%), LINN Energy (LINEQ), and SM Energy (SM -1.81%) all made other announcements that weren't exactly helping things, either. At the time of this writing, Shares of WPX, Laredo, LINN, and SM Energy are down 25%, 15%, 11%, and 15%, respectively.

So what: I think that by now, after all of these companies' stock prices have lost more than 80% over the past 18 months, we're all well aware that low oil prices are putting the screws to these companies. Even when oil prices were in the $50 range, we were concerned about these companies' abilities to stave off creditors. With oil prices almost half of that now, well, you get the idea. 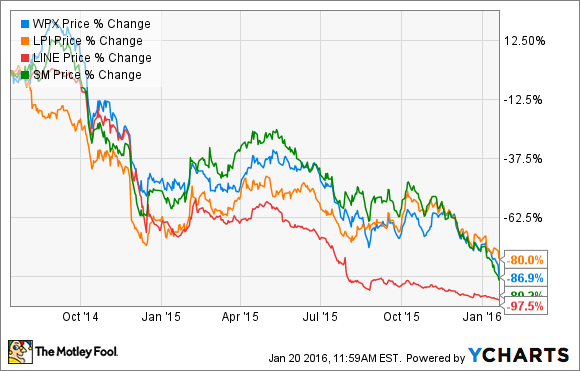 For WPX Energyv and SM Energy, the two companies did announce some good news...sort of. Both companies announced they had added some hedges to their production portfolio. The prices for these hedges are well above the current selling price, but some of them don't kick in until 2017, which doesn't exactly help stave off credit issues today. SM announced it had more than enough liquidity though its credit lines, but as we have seen over the past several months, those credit lines can be cut when banks redetermine the spending limits.

WPX is also in the process of a full asset switcheroo. Less then a couple of years ago, it was a major gas player in the Piceance basin and was touting its well economics there, but after making a major acquisition last year for acreage in the oil rich Permain Basin, WPX is now looking to sell a part of or all of its Piceance position.

For Laredo, the company announced yesterday that COO Jay P. Still had resigned, and that CEO Randy Foutch will assume his duties in the interim. It would seem that, considering the CEO is taking that role on rather than a succession plan, that this was rather unexpected.

In what was probably the most discouraging news, LINN Energy announced on Monday that, although the company has no plans to pay distributions to its investors in 2016, those same investors could be on the hook to pay any taxes that may incur in 2016. With oil this low, chances are there won't be a whole lot of income taxes to worry about, but the realized gains LINN could get from buying back debt at a discount could be a possible taxable event.

Now what: It's been a rough, rough ride for these companies, and the possibility of oil prices staying this low for a while could put these producers at the mercy of lenders pretty quick. While none of these companies' recent announcements is enough to significantly alter what's going on with each company, they aren't really helping the case. As much as a dirty value investors may consider circling like vultures over a near-dead animal, the chances of lower-for-longer oil prices should give investors enough incentive to stay away for a while.

Tyler Crowe owns shares of Linn Energy, LLC. You can follow him at Fool.com or on Twitter @TylerCroweFool.