All things considered, Pioneer Natural Resources (PXD 0.08%) performed admirably in 2015 after its stock only fell 16.4%. That was a much better showing than many of its other shale-focused peers: 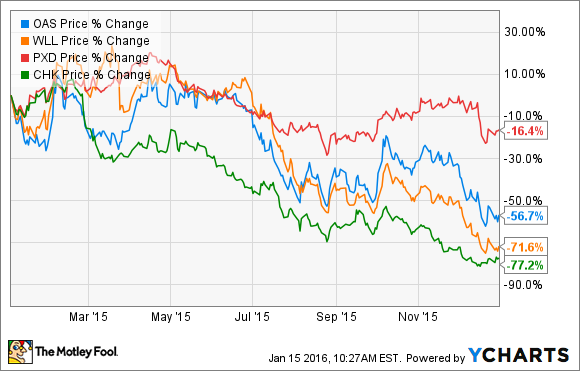 Pioneer was able to deliver this relative outperformance largely due to its stronger balance sheet and its premier position in the Permian Basin, which has shown to be much more resilient than the Bakken shale where both Whiting Petroleum (WLL) and Oasis Petroleum (OAS) make their home, as well as some of the plays that Chesapeake Energy (CHKA.Q) focuses on.

Having said that, Pioneer, like the rest of the market, is off to an awful start in 2016, with its stock already down double digits. Here's why more downside could be on the way.

Oil is falling into a bottomless pit
Since the start of this year the price of crude oil is down more than 15%, recently falling through $30 a barrel. It could have much further to fall with some analysts suggesting that $20 or $10 will be crude's ultimate bottom. Such a move lower would pull Pioneer Natural Resources lower because even it can't make money in that price range.

Most of its peers -- Oasis Petroleum and Whiting Petroleum included -- actually need the oil price to average roughly $50 a barrel in 2016 in order to balance cash flow with capex. Meanwhile, Chesapeake Energy and Pioneer Natural Resources need an even higher oil price to balance cash flow with capex because both are focused on growing their production even though the market is over-supplied. In other words, if oil continues falling it's only widening an already wide gap, which has the potential to weaken its balance sheet.

Weak balance sheet peers might go belly up
There is a growing concern that persistently weak oil prices could force shale producers to declare bankruptcy in droves. Bond investors are already pricing this in with some of Oasis Petroleum's bonds recently trading for just $0.53 on the dollar while some of Chesapeake Energy's bonds have plunged to $0.29 on the dollar. Meanwhile, some analysts are predicting that between one-third and half of all U.S. oil companies could go bankrupt over the next year.

Such a wave would fuel more panic in the industry and likely take Pioneer Natural Resources' stock down with it. This is despite the fact that it has a pretty strong balance sheet, having just raised $1.4 billion in cash to bolster its financial position.

The focus on growth might burn the company
Despite the fact that crude oil is falling into a seemingly bottomless pit, Pioneer Natural Resources keeps pushing its production higher. In fact, for the fourth quarter, the company expects its production to be above its guidance range due to stronger-than-expected well results. Furthermore, the company recently released its 2016 spending plans, which calls for it to send upwards of $2.6 billion to grow its production 10% to 15% above 2015's level. That growth is completely unnecessary at the moment.

Pioneer Natural Resources could actually be drilling its own grave, which is something that Chesapeake Energy did in 2016. Despite weakening oil and gas prices, Chesapeake Energy pushed its production well above its initial guidance due to stronger well performance. In doing so it not only burned through cash, but those wells didn't earn the returns the company had expected because the incremental production pushed prices much lower than expected. Pioneer could face the same fate because it might not earn as much as it thought if this incremental production contributes to increasing the oil glut, pushing prices even lower.

Investor takeaway
Pioneer Natural Resources could be in for a tough 2016. If oil prices continue to weaken and stay low for the balance of the year, it could have a huge impact on the company and its peers. That might lead to a rash of bankruptcies in the sector, while also wiping away the company's once-robust drilling returns. Suffice it to say, there's plenty of downside risk here, which is why investors need to be careful not to overallocate to the stock.