International Paper (NYSE:IP) is among the granddaddies of American capitalism. Formed in 1898 from the amalgamation of 17 pulp and paper mills in the Northeast, it started life as the largest U.S. producer of newsprint and a multinational, active in the U.S. and Canada. A member of the S&P 500 since the index's inception and component of the Dow Jones Industrial Average from 1956 to 1999, it's a classic among U.S. industrials.

So it's rather surprising that a pedigreed member of the "old" industrial economy was, until February last year, something of a darling of the Internet Age: 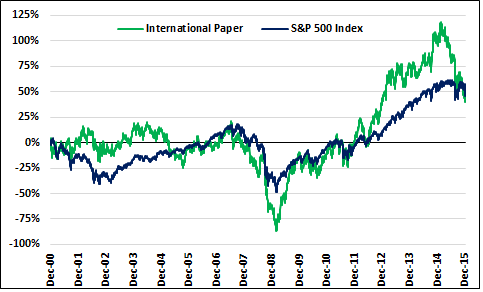 International Paper has, of course, changed over 118 years, but it still makes paper. However, it's long since abandoned newsprint, it's no longer based in the Northeast, and it now owns little forest acreage. International Paper's primary business is corrugated packaging, and the fulfillment requirements of Internet retailing have given a tremendous boost to it and other box suppliers.

While it may fraternize with the likes of Amazon.com these days, it remains close to its roots, transforming pulp into paper and packaging board, primarily in North America: 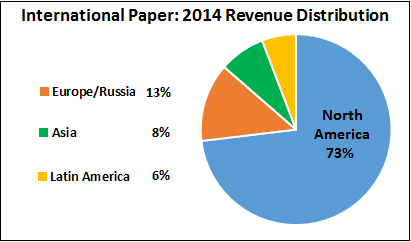 Although involvement with e-tailing has certainly been a boon to box makers, packaging remains a cyclical business: Demand softens when the economy weakens, because less is shipped so the need for boxes diminishes. It is unquestionable that e-commerce has raised the economy's base level of box consumption, and will probably raise it further, but like all retailing, it's sensitive to the economic cycle. Because it has been gaining share from traditional retailers, its sensitivity has been obscured, but it won't gain share indefinitely, and at some point its cyclicality will become fully apparent.

In addition, the paper industry has an investment-driven cycle of its own. Capacity is "lumpy": Single machines can cost $300 million and typically add enough to global supply that they depress pricing when they come on stream. This 400,000 ton per annum packaging paper machine -- by no means the largest of its kind -- is three stories high and the length of a football field:

Papermaking's main raw material is wood pulp, although recycled paper is also an important source of fiber, especially in packaging. The supply of pulp varies, as does its price: To say that there's a "pulp cycle" isn't really accurate, but as an item that's low-cost (between $375 and $975 per metric ton since 1985) but bulky, it's expensive to ship in the volumes that such voracious machines consume. So it's subject to local supply interruptions, which may vary considerably -- for instance, if weather conditions inhibit mill deliveries. Continuity of supply is crucial: Papermakers can't economically curtail or shut down production. 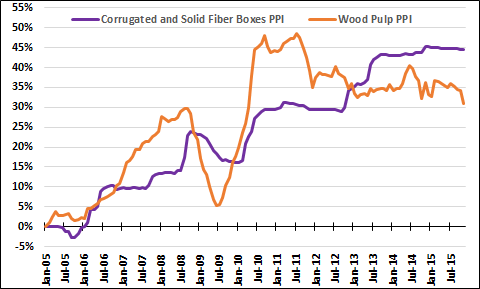 Raw-material pricing was broadly favorable in 2015, but box prices have stagnated over the past few years as world demand struggles to absorb new capacity. So why did International Paper so suddenly lose favor with investors? Last winter's weather was unhelpful, making it difficult for some mills to remain in full production. The collapse of the Russian ruble has severely crimped the contribution from International Paper's Ilim joint venture, which is largely financed in U.S. dollars, and currency effects were felt elsewhere, too. The company has been withdrawing from China, which ought, in current circumstances, to be regarded as a positive, but there may still be sufficient residual enthusiasm for the now-broken China growth story for these moves to be interpreted negatively. International Paper was exploring the possibility that it might place some mills into a master limited partnership structure, which would have had significant tax advantages, but this was nixed by an adverse Internal Revenue Service ruling last May. Investment in new plant proceeds apace, which is unhelpful to all participants in the industry until the new capacity is absorbed.

None of this seems enough to account for a 27.1-percentage-point loss of relative performance since International Paper's price peak on Feb. 20. Earnings through the year have been very sound, but not so solid as to justify the valuation at which it was trading at the time: 10 months later and down 36%, International Paper is still trading at 15 times annualized nine-month earnings, which is fairly rich for such an old-school, cyclical business. A dividend yield of 4.9% suggests investor skepticism about its ability to maintain such a high payout: It is fairly highly leveraged (equity is 14% of its balance-sheet total) and even apart from share repurchases, in the first nine months cash was drawn down. Analysts' consensus for a 6% 2016 earnings increase, much of it the result of share repurchases that have already occurred, is little cause for enthusiasm.

Based on its Christmas performance, the Internet retailing story remains intact. But International Paper's price seems to have discounted this and a lot of other good news.