The global resources company is expected to report its fourth-quarter results on Tuesday.

The past year has been brutal on Freeport-McMoRan (FCX 5.25%), which is evidenced by the fact that its stock price is down nearly 80%. That's largely the result of a decline in the price the company's two key commodities, copper and oil, which have both fallen sharply over the past year: 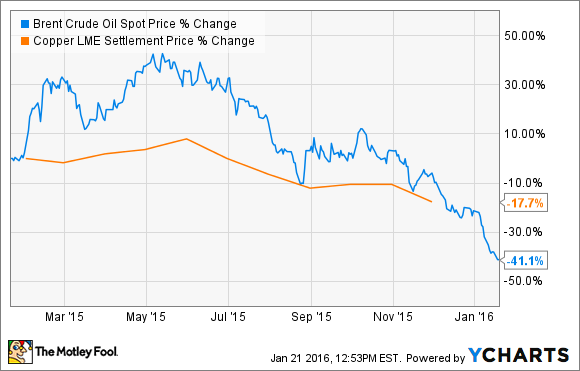 This price weakness, especially during the fourth quarter, will likely weigh heavily on the company's results and continue to put pressure on its operations. That's leading investors to question what it will do to put itself on the path toward sustainability, with three questions in particular needing to be answered when it reports on Tuesday.

Any more revisions to its 2016 spending plan?
In early December, Freeport-McMoRan announced a number of actions that it was taking to address weakening market conditions. Among them were revisions to its 2016 capex budgets, reducing oil and gas spending from $2 billion to $1.8 billion while cutting mining capex from $2.7 billion to $2 billion. At that spending level, the company thought it would produce enough cash flow to fund its capex while leaving it with a $600 million cushion that it could use to pay down debt.

That plan, however, was based on an average copper price of $2 per pound and $45 per barrel of oil in 2016. At the moment, both commodities are well below those prices. That has investors wanting to know if it will be making any further spending revisions.

Will it curtail more production?
In addition to the spending reduction, Freeport-McMoRan also announced in December that it would curtail production at some of its mines. It has already achieved curtailments of 250 million pounds of copper and 20 million pounds of molybdenum per year, and is undertaking plans for the full shutdown of its Sierrita mine in the U.S., which would push its curtailments up to 350 million pounds for copper and 34 million pounds for molybdenum. In addition to that, it said at the time that it was continuing to evaluate its mining operations and could make further adjustments. Given the continued collapse of commodity prices, it's possible that the company will announce more curtailments this quarter. Having said that, rival BHP Billiton (BHP 2.39%) recently announced that its 2016 copper guidance remains unchanged, with the company deciding not to curtail any of its production. That said, BHP Billiton's copper production has fallen over the past year due to weaker ore grades at its Escondida mine, while Freeport's has been growing due to mine expansions.

Meanwhile, with oil and natural gas prices continuing to weaken, it's possible that Freeport-McMoRan could decide to shut in production. A growing number of producers are turning off economic wells, choosing not to sell production that doesn't make economic sense. In particular, the company has some gas assets that it has been trying to maximize for near-term cash flow that could be shut down in order to preserve that value for when prices improve.

Is it making progress on asset sales?
The commodity price crunch is putting a lot of pressure on Freeport-McMoRan because its balance sheet is burdened with more than $20 billion in debt. It had hoped to use its cash flow to pay down that debt, but things have not gone according to plan. That's why the company has been seeking alternative sources of cash. That said, it has struggled to find any deep-pocketed partners, which is why it has started to consider a range of asset sales to bolster its balance sheet, including selling some or all of its oil and gas business as well as a slice of its crown jewel.

The company has taken the better part of a year searching for funding alternatives, which has investors wondering what's taking so long. Suffice it to say, investors want to know what progress is being made to bring cash in.

Investor takeaway
Freeport-McMoRan has a lot of unanswered questions that investors hope will be addressed this week. The company really needs to make tangible progress because the continued slide in commodity prices has put its long-term survival in question.

Matt DiLallo owns shares of BHP Billiton Limited (ADR). The Motley Fool owns shares of Freeport-McMoRan Copper & Gold. Try any of our Foolish newsletter services free for 30 days. We Fools may not all hold the same opinions, but we all believe that considering a diverse range of insights makes us better investors. The Motley Fool has a disclosure policy.