Please ensure Javascript is enabled for purposes of website accessibility
Log In Help Join The Motley Fool
Free Article Join Over 1 Million Premium Members And Get More In-Depth Stock Guidance and Research
By Keith Speights - Jan 26, 2016 at 7:45AM

Investors looking for solid dividends have turned to pharmaceutical stocks for a long time. Pfizer (PFE -0.91%) attracted many of these investors, and for good reason. The big drugmaker recently hiked its dividend by 7% and now boasts a yield of 3.86%. That's certainly enticing, but here are a couple of other pharmaceutical stocks that might be even better picks for dividend-oriented investors.

GlaxoSmithKline (GSK -1.72%)
When it comes to yield, GlaxoSmithKline beats Pfizer hands down. Glaxo's dividend yield of 5.45% ranks among the highest in the healthcare sector. The company's dividend payout ratio (the percentage of earnings paid out through dividends) is only 39% compared to Pfizer's payout ratio of 82%.

Normally, a payout ratio at Glaxo's current level would mean the dividend should be pretty safe. Keep in mind, though, that the company received a large influx of cash stemming from a major deal with Novartis that closed in 2015. Even with this caveat, I don't think investors have reason to worry about Glaxo sustaining its dividend payment -- at least at current levels.

Some might be scared away from GlaxoSmithKline because of the difficulties the company has faced in the last few years due to the patent cliff. In particular, the loss of patent protection for COPD and asthma drug Advair has hurt Glaxo's revenue, as the chart below clearly shows. 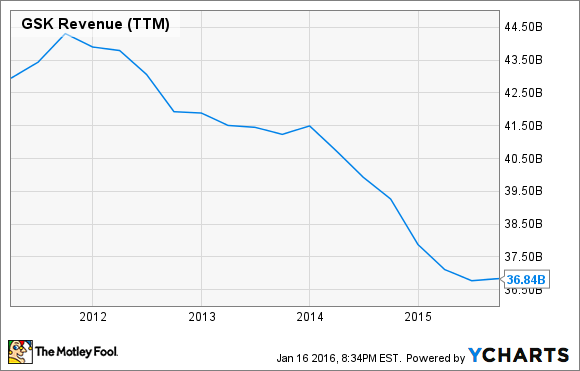 Should this trend scare investors away from Glaxo? I don't think so. The deal with Novartis puts Glaxo in position to increasingly benefit from two relatively stable revenue-generating lines of business -- consumer health and vaccines. More importantly, growth for Glaxo's newer products is more than offsetting the slower sales resulting from patent losses for Advair and Lovaza.

I also like Glaxo's pipeline potential. The company could file for regulatory approval for as many as 20 new drugs in the next four years. Seven of those drugs are in late-stage development and could potentially hit the market before 2020.

Merck (MRK 0.51%)
Merck's dividend yield is 3.55%, slightly below that of Pfizer. So, why should investors consider Merck as a potentially better dividend play than its peer?

One edge for Merck is its relatively low dividend payout ratio of 48%. The drugmaker has made considerable improvement on this metric over the last couple of years. Pfizer, on the other hand, has seen its payout ratio increase. 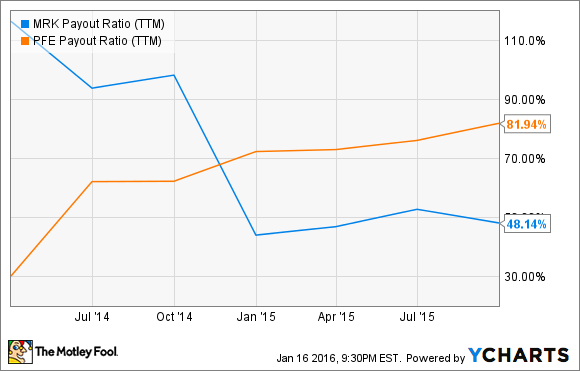 Merck's best-performing drug, Januvia/Janumet, saw sales grow 10% year over year in the third quarter of 2015. That's not bad, but it's not awe-inspiring either. However, Merck now has a drug that holds the potential to see sizzling sales growth: Keytruda. The cancer immunotherapy is the first anti-PD1 therapy to gain regulatory approval.

Even better news for Merck shareholders is that Keytruda is being studied in over 200 clinical trials, and over 80 studies in combination with other drugs. Those eyebrow-raising numbers underscore just how important this drug could be to Merck over the next several years.

Merck could also make waves in the hepatitis C market with its grazoprevir/elbasvir combo. Gilead Sciences' Harvoni and Sovaldi have dominated the hep C market, but if Merck's price point is more attractive to payers, this could be another big win for the drugmaker.

Pfizer's dividend is solid and should be pretty safe despite the company's relatively high payout ratio. Pfizer's planned merger with Allergan and subsequent change in domicile to Ireland should bring significant financial benefits. And breast cancer drug Ibrance's roaring sales could give Pfizer its next blockbuster drug. There's definitely some good news in Pfizer-land.

The reality is that Big Pharma holds several great opportunities for dividend-seeking investors. Glaxo, Merck, and Pfizer are all smart picks. Limit yourself to just one juicy healthcare dividend stock? Forget about it.