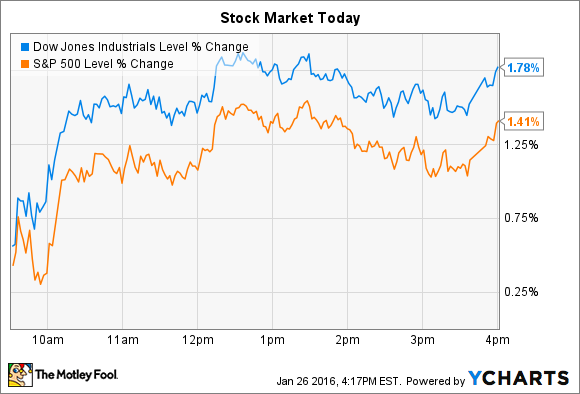 Investors got two encouraging pieces of news on the economy this morning. First, the housing market showed continued strength, as home prices rose 5.5% nationwide in November, up slightly from the prior month's pace, according to the S&P/Case-Shiller Home Price Index.

And second, consumer confidence improved in December, notching its second straight month of gains. "For now, consumers do not foresee the volatility in financial markets as having a negative impact on the economy," a member of the Conference Board explained.

As for individual stocks, Procter & Gamble (NYSE:PG) and Coach (NYSE:TPR) made notable moves today after posting their quarterly earnings results.

Procter & Gamble's higher prices
Procter & Gamble announced a return to sales growth for its fiscal second quarter. The company managed 1% higher organic sales, compared with a negative 1% result in the prior quarter. That rebound helped the stock rise 2% to extend its market-thumping streak deeper into 2016: 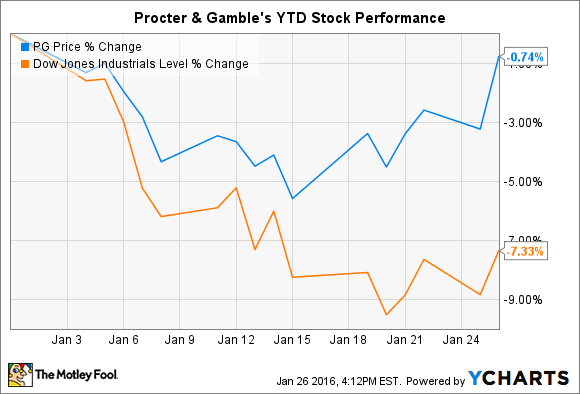 While the numbers conveyed an important turnaround, P&G's organic growth was weak -- it came exclusively from higher prices (+3%) that more than offset slumping sales volumes (-2%). Ideally, the company would be growing through a mix of price and volume gains. Meanwhile, P&G's 1% uptick trailed rivals Kimberly-Clark and Unilever, which both logged 5% organic growth last week.

The profit side of the business held better news for shareholders. P&G's huge cost cut initiatives helped push profitability up by 3 percentage points to 23% of sales. As a result, earnings grew at a much faster pace than revenue, up 9% to $1.04 per share. Consensus estimates were for P&G to post $0.96 per share of profit. The company affirmed guidance for the full fiscal year that ends in June, forecasting slight sales growth and robust profit gains.

Coach's turnaround progress
Coach was one of the best-performing stocks on the S&P 500 today as shares jumped 9% on heavy trading volume. Investors cheered the luxury retailer's fourth-quarter results that showed its first revenue growth in 10 quarters: Sales ticked up by 4% to $1.27 billion as its Stuart Weitzman product line enjoyed strong consumer demand.

Coach still struggled with declining comparable-store sales, but the trend is improving. Comps fell 4% last quarter and by 11% in fiscal Q1.

CEO Victor Luis and his executive team believe that comps will continue improving and in fact break back into positive territory within the next two quarters. "Our results continue to give us confidence that the cumulative impact of our actions will result in a return to top line growth this fiscal year," Luis said in a press release. Coach also raised its full-year earnings outlook slightly, thanks to the better-than-expected performance of its Stuart Weitzman line.

Profitability fell this quarter as gross margin declined to 67% from 69% of sales, but the company sees that slip as only a temporary setback. Coach's 2016 forecast calls for a rise in gross margin, and plans to end the fiscal year at roughly the same profitability level, 69%, that it booked in fiscal 2015.