Please ensure Javascript is enabled for purposes of website accessibility
Log In Help Join The Motley Fool
Free Article Join Over 1 Million Premium Members And Get More In-Depth Stock Guidance and Research
By Daniel Miller - Jan 26, 2016 at 8:03AM

Despite having a long-term horizon, I can't bring myself to buy Caterpillar -- at least not yet.

We've heard it a million times: "Buy low, sell high." We all wish it were only that simple, but of course, investors know the market can make buying low and selling high much more difficult than it sounds.

It's been a very rough couple of years for Caterpillar (CAT 1.46%), but investors now have an opportunity to buy a blue-chip stock at a cheaper price. Let's take a look at how Caterpillar's business has been  struggling lately, and why the fourth quarter might be worse than expected. 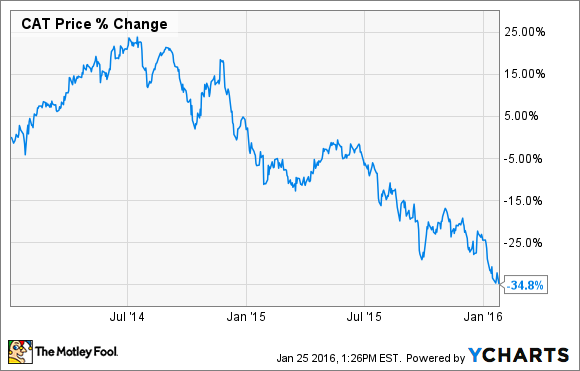 Digging a hole
Looking at Caterpillar's retail sales, it seems pretty clear that things aren't getting better. In fact, some of Caterpillar's retail segments have reversed course and are getting worse. More specifically, Caterpillar's Resource Industries sales during October's and November's rolling three-month periods checked in with two of the worst declines in 2015.

The story is similar for Caterpillar's Construction Industries in the grand scheme, although November's statistics were at least moving in the right direction. While November was less of a bad month, that's hardly a victory, and the segment's sales continue to be heavily weighed down by its Latin America region, which posted a near-40% drop in sales for November.

Arguably the most disappointing, though, was Caterpillar's Energy & Transportation retail sales. 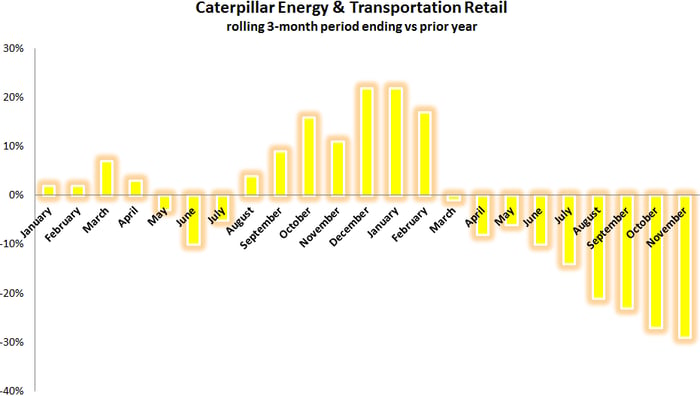 What was perhaps the only bright spot in the company's retail sales at the beginning of 2015 quickly reversed course. Plunging oil and gas prices have certainly hurt sales, sending the oil and gas part of its energy and transportation retail sales from up 20% year over year in January 2015 to a 37% decline in November. The transportation section was even worse, checking in with a 72% year-over-year gain in January 2015 and then a decline of 58% for November.

It's pretty easy for investors to be pessimistic regarding Caterpillar's upcoming fourth-quarter earnings release due on Jan. 28. In fact, according to Barron's, Goldman Sachs analyst Jerry Revich explained Monday morning why it was time to sell Caterpillar:

We downgrade Caterpillar to Sell from Neutral with a $51, 12-month price target (16% downside, vs 6% avg. coverage upside) as we see sustained lower returns on capital in this cycle driven by an extended rationalization in global infrastructure capex and excess machinery capacity. ... We are clearly not early on Caterpillar, but our 2017 EPS is now 15% below consensus and our company and country-level commodity reinvestment analysis suggests capex in Caterpillar's primary end markets is above mid-cycle levels, in contrast to consensus expectations of a 2016 EPS bottom.

The real problem
Caterpillar is cutting costs by reducing its workforce and has closed or consolidated more than 20 plants across the world since 2012. However, despite those efforts, 2016 is likely to be the first time in the company's 90-year history that sales and revenues have declined for four consecutive years. Also, during the third quarter, Caterpillar noted that its restructuring costs were much higher than anticipated, and if that trend held true through the fourth quarter, it could be a worse quarter than many were expecting.

The real problem facing investors hoping to buy shares of Caterpillar at a seemingly cheap price is that there don't appear to be any real catalysts in the near term. The commodity picture continues to worsen, and plunging oil prices are negatively impacting many of Caterpillar's customers. Furthermore, slowing global growth points to more retail sales pain for Caterpillar's equipment in 2016, and nobody knows if things will get worse before they get better. Already, Caterpillar is guiding for a 10% year-over-year decline in resource industries revenue this year, and a 5% to 10% decline in energy and transportation revenues. Even the construction industries segment is expected to check in with -- at best -- flat revenues, and as low as a 5% decline.

Despite its global sales woes, Caterpillar isn't going anywhere, and it has a number of competitive advantages, including scale from being such a massive global company. But there doesn't appear to be any relief in the near term for its struggling business segments, and investors could easily find stocks with positive catalysts and more upside at the moment.