Please ensure Javascript is enabled for purposes of website accessibility
Log In Help Join The Motley Fool
Free Article Join Over 1 Million Premium Members And Get More In-Depth Stock Guidance and Research
By Cory Renauer - Jan 26, 2016 at 9:20AM

It's shaping up to be a banner year for the cystic fibrosis leader.

Seasoned investors know all too well how unpredictable the future can be. Biopharma companies developing new therapies take uncertainty to another level. But even though the broad market has performed dismally over the past few weeks, there are plenty of reasons 2016 could be the best year yet for Vertex Pharmaceuticals (VRTX 2.06%) and its cystic fibrosis franchise.

Some background
Cystic fibrosis is a rare disease that threatens the lives of over 75,000 people around the globe. Scientists have long known that it's caused by dysfunctional CFTR proteins found at the surface of lung cells and other organs. The trouble is that such dysfunction can be the result of thousands of known mutations in the CFTR gene.

Prior to approval of Vertex's first cystic fibrosis therapy Kalydeco in 2012, no drugs were available to treat the underlying cause of the disease. First approved for treatment of just one of these mutations, the drug launched with an available market of just 1,200 U.S. patients. Since then, the company's R&D machine has been racing to increase the drug's availability, with great success. At the end of 2015 about 4,000 patients were eligible for Kalydeco treatment.

Increasing availability
A small part of the reason I expect 2016 to be a banner year for Vertex has to do with a pending application at the FDA to expand the Kalydeco label to an additional 23 mutations, raising the drug's eligible population by about 1,500 patients in the U.S. alone. With a list price of around $300,000 per year, this expansion would significantly add to the the company's top line if approved.

Despite its limited pool of available patients, Vertex thinks it sold $630 million worth of Kalydeco last year, $180 million in the fourth quarter alone. Those were just preliminary figures announced during the recent J.P. Morgan Healthcare Conference. We'll know for sure when the company reports again, probably near the end of January.

Although Vertex has had tremendous success expanding Kalydeco's label, the biggest reason I expect 2016 to be Vertex's best year yet is the somewhat recent regulatory success of its second cystic fibrosis therapy, Orkambi. Approved by the FDA last July, this combination of Kalydeco's active ingredient and lumacaftor hit the ground running with a treatable population of about 8,500 in the U.S. alone. Again, these are preliminary figures, but with less than half a year on the U.S. market the company thinks sales of Orkambi reached $350 million last year.

While the domestic rollout of Orkambi is progressing rapidly, across the pond the pace is a bit slower. The European Commission granted its first marketing authorization to Orkambi last November for patients 12 and over. This represents a treatable population of roughly 12,000 that will slowly add to the drug's sales as the company negotiates reimbursement rates from one country to the next.

With a list price of $259,000 per patient, those negotiations are likely to be tense. However, a dearth of available options for cystic fibrosis patients should quicken the pace, and sales from the region's major markets could begin flowing soon. Some analysts are predicting peak annual sales north of $4 billion for Orkambi in the years ahead. I'll stick my neck out and predict more than $1 billion before the end of the year, perhaps $1.5 billion depending on the pace of negotiations throughout the Eurozone.

In the numbers
Vertex management has been justifiably shy about making its own Orkambi predictions for next year, but it has already provided guidance suggesting that Kalydeco sales reach about $680 million this year. That figure does not include the potential addition of the 1,500 additional patients awaiting a label expansion from the FDA due any day now.

If Kalydeco's label is expanded, and those European Orkambi revenues begin flowing, Vertex could be looking at total sales of more than $2 billion for the year, easily surpassing its 2012 peak of $1.5 billion. 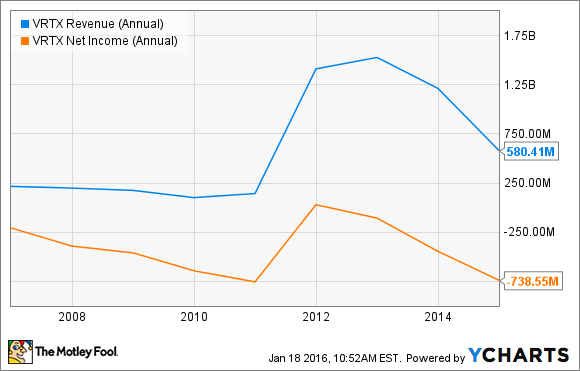 The company's bottom line should also see its best year yet. Vertex briefly flirted with profitability following the short-lived success of hepatitis C antiviral Incivek. Management is expecting operating expenses of around $1.2 billion. That doesn't include the cost of manufacturing its drugs or taxes, but profits of just $29.6 million achieved in 2011 isn't much of a hurdle.

Looking ahead, there are plenty of reasons to be optimistic about 2017 as well. The majority of cystic fibrosis patients are diagnosed before their first birthday. Phase 3 trials that could lead to an expansion of Orkambi's label to about 5,800 additional patients currently considered too young are well under way.

Any way you slice it, this year is shaping up to be Vertex's finest. With a bit of luck the high water mark it creates will be very short-lived.

Cory Renauer has no position in any stocks mentioned. The Motley Fool recommends Vertex Pharmaceuticals. Try any of our Foolish newsletter services free for 30 days. We Fools may not all hold the same opinions, but we all believe that considering a diverse range of insights makes us better investors. The Motley Fool has a disclosure policy.