Please ensure Javascript is enabled for purposes of website accessibility
Log In Help Join The Motley Fool
Free Article Join Over 1 Million Premium Members And Get More In-Depth Stock Guidance and Research
By Anders Bylund - Jan 27, 2016 at 11:30AM

There's no such thing as a risk-free business. Here are three threats that could derail the Linux vendor's gravy train -- and why this Fool thinks they won't.

I have made it clear many times that Red Hat (RHT) can weather many storms. The company can sail through economic crises with nary a scratch, largely ignores the currency exchange issues that many other global companies blame for recent weakness, and generally looks like a battle tank on Wall Street.

But there are always clouds on the horizon. Every suit of armor has its chinks, and Red Hat is no exception. As a shareholder, I would be silly to ignore these potential threats.

So let me go over the three biggest risks facing Red Hat right now -- and why I'm still holding on to my shares despite these hazards.

Competition
First of all, no company is ever completely safe from being destroyed by the competition.

At the moment, Red Hat is sitting pretty. The company is growing sales faster than Microsoft (MSFT 0.71%) and Oracle (ORCL 0.39%), both in recent quarters and over the longer haul: 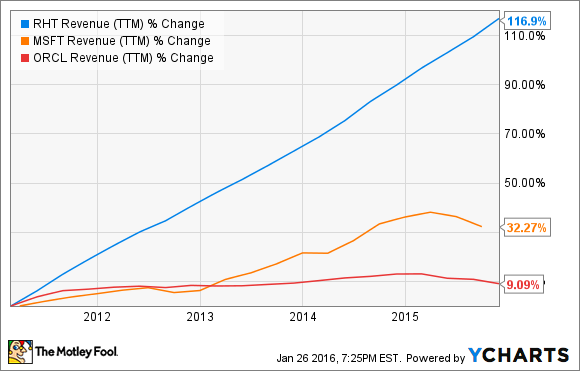 Look at those revenue trends any way you like. It is fairly obvious that the smaller open source vendor is stealing market share from its larger, more traditional rivals. So far, so good.

But the gravy train may not run unchallenged forever.

Already, Microsoft CEO Satya Nadella is throwing out much of the stilt-legged stiffness that used to rule Redmond when Steve Ballmer was running the show. Nadella is still a few magnitudes short of turning the Windows source code over to an open-source development community and focusing on delivering stellar support for that low-cost, high-quality product. But what if he took that step, essentially becoming Red Hat's much larger spiritual cousin?

And what if Oracle stopped optimizing every product for maximum revenue, instead flooding the market with affordable database tools of unbeatable quality? And maybe the remnants of that near-forgotten Sun Microsystems buyout could come up with another Solaris-branded operating system that puts Red Hat's best efforts to shame?

These are always very real possibilities. Both Oracle and Microsoft could erase Red Hat's business moat, piece by piece -- but it would take the software giants in whole new directions. Even if Nadella and the new co-CEOs of Oracle are willing to take these drastic steps, their boards of directors might not allow it to happen.

So Red Hat's best defense against the largest threat on the table is very simple. Just keep executing as before, and count on good old inertia keeping the wolves at bay. It's a surprisingly effective strategy.

Missing the boat on The Next Big Thing
So the current Next Big Thing is the Internet of Things. Connecting all sorts of machines to each other and letting automated code do all the talking is a game-changing idea, worth trillions of dollars over the next couple of decades.

Luckily, Red Hat is already sinking its teeth into that juicy opportunity, establishing its software as go-to choices for security and effective management. Nimble tools like computing containers and turnkey OpenStack systems will keep Red Hat relevant in this important space for years to come.

So this round is already working out just fine. But what's coming behind that revolution?

If I had a serious answer to that question, I'd be too rich to bother writing this article. I would be rubbing shoulders with Bill Gates and Warren Buffett in Davos, or networking over pointillism classics and drinks in Saint-Tropez.

Is Red Hat CEO Jim Whitehurst the right captain for the next storm? Red Hat investors sure hope so. Photo: Red Hat.

That's where Red Hat wants to end up, even if I can't join the party (but never say never, right?). That means keeping a sensitive finger on the pulse of the IT community, and not being afraid to take large risks when that next train pulls into the station.

I do trust Red Hat CEO Jim Whitehurst to make difficult and unpopular decisions when he needs to. That's how he built his turnaround legacy as COO of Delta Air Lines, after all. But we're all human. What if the next game-changing tech revolution means giving up on the open-source ethos? What if containers and drop-in virtual computing stacks turn obsolete overnight, kind of like the VHS tape or dial-up Internet connections?

Whitehurst means well, and I don't know if there's anybody I'd rather have in his corner office if and when the next revolution happens. But we're all human, and it's difficult to kill your (metaphorical, mind you) babies when the time comes.

This is a fairly long-term concern -- I think. Of course, that's what everyone thinks until the new overhaul is banging on the door. You just never know.

Again, I think that Whitehurst is one of the best names available for handling this exact problem. But that's why they play the game.

Misjudging future growth rates
On that note, and building further on the human nature of running any business, Whitehurst and his management team could misread market conditions and dishevel that beautiful growth curve at any moment. All it takes is underestimating the challenges ahead. That wasn't a speed bump after all, but a game-changing brick wall. Conversely, over estimating the same threats could lead us right back to "missing the boat."

Six years ago, Netflix shares were racing to the moon and setting fresh all-time highs on an almost daily basis. Meanwhile, the company spent more than $700 million on share buybacks at ever-escalating prices.

This was a terrible waste of cash, better used for pumping up the DVD library or getting the fledgling digital streaming service off to a stronger start. Netflix should have been investing in its own growth, not spending hard-earned cash on share count management.

Yep, this is Qwikster with a new name. Nobody really cares anymore. Image: DVD.com/Netflix.

And then, on the heels of the ill-advised Qwikster adventure, Netflix canceled its buyback program and started raising cash in the form of (groan) stock sales at deeply depressed share prices.

So Netflix first underestimated the difficulty level of turning into a digital enterprise, and wasted tons of shareholder value on poorly timed share buybacks. And then the same company arguably overestimated the need for an immediate cash infusion, diluting its shares by 10% in 18 months but never actually running short on cash.

The upside, of course, is that Netflix made it through all that turmoil. If you bought shares in 2012, you're looking at a tenfold return despite the heavy dilution. And Netflix did indeed basically kill its DVD-based core business and start over as a streaming video pioneer. It all worked out, even if it shouldn't have.

The Netflix saga is both an illustration of the difficulties Red Hat might face one of these days -- see the previous two sections for more detail -- and an inspirational story of overcoming tall odds. Netflix is now a very different company than the one that entered 2010 on a pile of red DVD mailers. I can't say that Red Hat absolutely will stare down this type of game-changing revolution, but let's just say I wouldn't bet against it either.

So let's hope that Jim Whitehurst has learned from the mistakes of Netflix CEO Reed Hastings. He might need the same skills someday.