Please ensure Javascript is enabled for purposes of website accessibility
Log In Help Join The Motley Fool
Free Article Join Over 1 Million Premium Members And Get More In-Depth Stock Guidance and Research
By Matthew DiLallo - Jan 27, 2016 at 11:06AM

The midstream master limited partnership's coverage ratio is a bit weak. Here are some better choices.

Over the past year, Energy Transfer Partners' (NYSE: ETP) unit price has fallen more than 50%. That plunge is largely due to worries that the company might have to reduce its generous distribution payments after its coverage ratio weakened. While that risk might be overstated, it's one that many investors aren't willing to take. Those investors would be better off forgetting about Energy Transfer Partners and taking a closer look at three companies that have much safer coverage ratios.

The crux of the concern
Energy Transfer Partners' distribution coverage ratio became a big concern last quarter after it fell to 0.84 times due to weakness in its midstream segment. This pushed the coverage ratio down to an average of 0.97 times through the first three quarters of 2015, meaning the company is paying out all of its cash flow and then some. That's an unsustainable payout ratio, which is why some investors fear the payout will need to be reduced.

The NGL growth engine
Sticking with the energy midstream sector, MPLX (MPLX 3.15%) has historically delivered robust distribution growth while still maintaining a very conservative payout ratio, which is clear on the slide below: 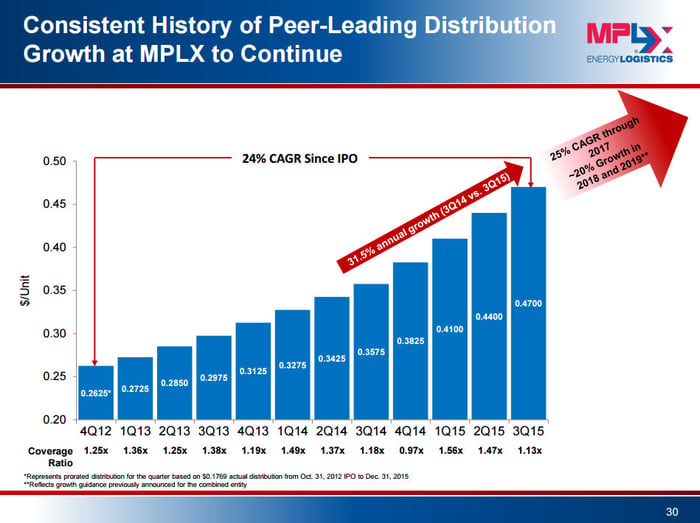 As that slide notes, only once has the coverage ratio fallen below 1.0 times, which was a real outlier because the coverage ratio has typically been well above 1.1 times. That's not anticipated to change with the company targeting to keep its coverage ratio at 1.1 times in the future while also expecting to deliver robust 20%-plus distribution growth through 2019. That's a lot better growth and security than Energy Transfer can offer right now.

The consistent coal MLP
For investors who would rather avoid the energy midstream sector at the moment, coal MLP Alliance Resource Partners (ARLP 2.39%) is another company with a history of maintaining a strong coverage ratio. In fact, last year its coverage ratio averaged 1.62 times, which was only slightly lower than the 1.72 times it averaged in 2014. That said, it is taking a very conservative business approach to 2016 given that the current weakness in the coal market is holding back production this year while it waits for the coal market to recover. Because of this, Alliance Resource Partners only expects its ratio to average 1.1 times to 1.2 times in 2016, which is backed by the company's strong foundation of long-term coal contracts with utilities. Furthermore, if the coal market improves, there's upside to that ratio as well as the distribution. That said, even if the coal market continues to weaken, Alliance Resource Partners' distribution is rock-solid for 2016, which isn't something that can be said for Energy Transfer Partners' payout at the moment.

Investor takeaway
While there's a case to be made that Energy Transfer Partners can both sustain and raise its distribution in 2016, there's a growing risk that it could miss the mark. Investors worried about the sustainability of Energy Transfer Partners' payout should instead focus on companies with stronger coverage ratios, with Sunoco Logistics Partners, MPLX, and Alliance Resource Partners among the better options.