A volatile day on Wall Street today couldn't hold these stocks back from double-digit percentage gains.

Volatility continued to affect stocks as major indexes opened sharply higher this morning, dove into negative territory, and then rebounded to end the day with solid gains. The Dow Jones Industrial Average (^DJI 1.27%) rose by 125 points, or 0.8%, by the closing bell, and the S&P 500 (^GSPC 1.73%) added 10 points, or 0.5%: 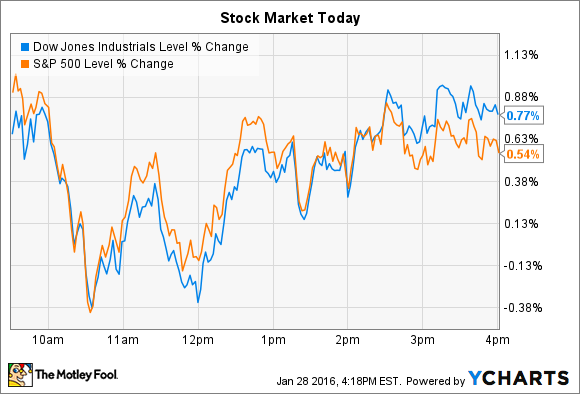 A rebound in oil prices pushed energy stocks higher, helping that sector lead all others in the market today. Meanwhile, fourth-quarter earnings reports sparked a few dramatic stock price swings, most notably Facebook (META 1.70%) and Under Armour (UAA 1.83%), which both surged higher in the wake of announcing their quarterly figures.

Facebook's base of daily users jumped to 1.04 billion in the fourth quarter, up 17% from a year ago. Those users are now collectively watching more than 100 million hours of video on the service, per day, executives noted in a conference call. And they're doing it almost entirely on mobile devices: Mobile ad revenue accounted for 80% of all ad revenue, compared to 69% a year ago.

The company is monetizing its growing base at a record pace. Average revenue per user (ARPU) climbed higher in every region of the world, led by the U.S. and its $13.54 result. Worldwide, Facebook's ARPU rose to $3.73 – from $2.81 last year, helping push operating margin up from 29% of sales to 44 %. The sharply improving revenue and efficiency results powered a doubling of net income to $1.6 billion, equating to $0.79 per share of earnings. Consensus estimates from Wall Street analysts had Facebook expected to post $0.68 per share in profit.

Under Armour's new growth markets
So much for those worries about a fourth-quarter profit and sales growth slowdown at Under Armour. The sports apparel retailer today announced that revenue improved by 31% last quarter, which was an acceleration from the 28% gain it booked in the prior quarter. That result also marked Under Armour's 25th consecutive quarter of growth at a 20% or better pace. Shares rose 23% on the day.

Its core sports apparel category logged hefty gains, but the company saw its best result from footwear, which nearly doubled to $167 million of sales. That category now accounts for 18% of Under Armour's business, up from 14% a year ago.

Shoes sales are a touch less profitable, though, which was the main reason why Under Armour's gross margin slipped to 48% of sales from 50%. 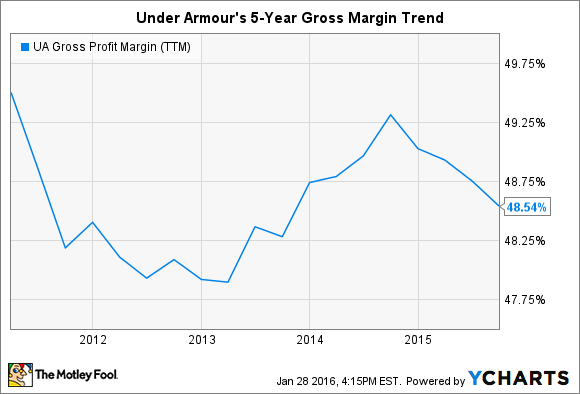 CEO Kevin Plank and his executive team seem to like the trade-off between slightly lower profitability and sharply higher sales. The company today forecast that 2016 revenue should grow by 25% as operating income improves at a slower pace, up 23% to $500 million.

Management is focused on developing new products to extend its reach into emerging categories while growing market share in UA's core apparel lines. "From shirts and shoes to your connected life, Under Armour will continue to be a leader in innovation," Plank said in a press release .

Demitrios Kalogeropoulos owns shares of Facebook. The Motley Fool owns shares of and recommends Facebook and Under Armour. Try any of our Foolish newsletter services free for 30 days. We Fools may not all hold the same opinions, but we all believe that considering a diverse range of insights makes us better investors. The Motley Fool has a disclosure policy.