Please ensure Javascript is enabled for purposes of website accessibility
Log In Help Join The Motley Fool
Free Article Join Over 1 Million Premium Members And Get More In-Depth Stock Guidance and Research
By Daniel B. Kline - Jan 29, 2016 at 8:18AM

The search giant's founders have a serious company, but they have also been silly along the way.

Alphabet's(GOOG 2.68%) (GOOGL 2.63%) Google has become the rare company that crossed over from a brand name to a generic.

Like the word "Kleenex" being used for a tissue, or "Frisbee" being substituted for a flying disc, or "Coke" for any type of soda, so "Google" now means searching on the Internet. Of course, because the search leader so thoroughly dominates its core business, there's a good chance that even when the term is used generically, the actual search will take place on Google.com.

And while it's become one of the most recognizable brands in the world, the company still has its mysteries. Here are 12 things you may not have known about Google:

1. While Google.com is the most-visited website in the United States and the world, according to Alexa.com (an Amazon.com company), and the U.S. is its top market, providing over 34% of its traffic this month, Google.com is not the top website in its No. 2 market. The search giant gets 10.1% of its traffic from India, according to Alexa, but it's second in the market behind ... itself. Google.co.in tops the chart in India, with its parent site coming in just below.

2. Before Google creators Larry Page and Sergey Brin collaborated on Google, the two then-Stanford grad students had a search project called Backrub, which lived on the school's servers for more than a year.

3. Google sometimes replaces its logo with an alternative version, which the company calls Google Doodles. Though these usually just appear for a day, the search engine keeps an archive of them, which can be found here.

This Doodle was for Poland's Grandfather's Day in 2016. Source: Google.

4. While Google doesn't maintain its own inventory like Amazon, it has dipped its toe into the sales game. The search giant competes with the online retailer in a number of markets with Google Express -- a same-day shopping service in partnership with a number of top retailers. Google has also pursued federal permission to use drones for delivery -- much as Amazon has -- which likely would be part of an effort to compete more heavily in selling goods.

5. Nearly all of the money Google makes comes from advertising. In the third quarter of 2015, the company reported $18.67 billion in total sales, with $16.78 billion coming from the sale of ads. That makes Google the biggest ad seller in the digital world, outpacing second-place Facebook by over four times. The social-media company posted $4.29 billion in ad sales in its most recent quarter.

6. Google lets people select a number of joke languages for search, including "Bork, Bork, Bork!," the distinctive dialect of the Swedish Chef from The Muppets, and Klingon, as spoken by the Star Trek aliens. 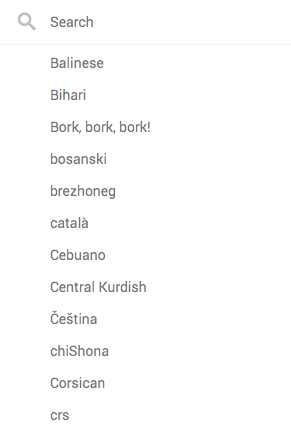 7. Google has a strong commitment to clean energy, and the company has invested in a number of projects to deliver renewable-energy sources that are sustainable and affordable. "To help make this a reality, we invest in innovative, large-scale energy projects," the company wrote on a Web page. "To date, we've made agreements to fund nearly $2.5 billion in clean energy wind and solar projects."

The company's biggest investment is a $300 million portfolio fund with SolarCity, which will be invested in residential rooftop solar placements in 15 states over a 12-month period.

8. The company's name was derived from the word "googol," a mathematical term for the number represented by the numeral 1 followed by 100 zeros. This name reflected "Larry and Sergey's mission to organize a seemingly infinite amount of information on the Web," according to the company's own history page.

9. In 2015, the most searched event or person of the year was the November terrorist attacks in Paris, with nearly 900 million searches. That easily beat out Star Wars (155 million), and Adele, who came in second with 439 million searches.

10. Sun Microsystems co-founder Andy Bechtolsheim was Google's first real investor, putting in $100,000 in August 1998 before the company technically existed and before it actually had a bank account.

11. Google first appeared as a top-20 website in 2001, placing 11th for the year, according to a Washington Post chart. AOL claimed the top position that year, with the defunct (at least in their original incarnations) Lycos and InfoSpace both placing ahead of Google.com, which didn't take No. 1 until 2008.

12. While the Android programming language has become heavily associated with the Google brand, the company didn't create it. The search giant bought the little-known start-up for $50 million in 2005, according to Bloomberg. The news site wrote at the time that the company was doing it to acquire employees, including co-founder Andy Rubin, who previously started mobile-device maker Danger Inc., which was all Google would confirm in its initial statement:

"We acquired Android because of the talented engineers and great technology," Google stated. "We're thrilled to have them here."

Suzanne Frey, an executive at Alphabet, is a member of The Motley Fool’s board of directors. Daniel Kline owns shares of Facebook. The Motley Fool owns shares of and recommends Alphabet (A shares), Alphabet (C shares), Amazon.com, Facebook, and SolarCity. Try any of our Foolish newsletter services free for 30 days. We Fools may not all hold the same opinions, but we all believe that considering a diverse range of insights makes us better investors. The Motley Fool has a disclosure policy.