These consumer stocks could reward patient investors in 2016 despite recent market volatility.

2016 hasn't been kind to investors. Stocks of every industry and quality are plummeting on China concerns and global uncertainty, while the U.S. stock market is headed for its worst January on record. But despite the recent turmoil -- or, perhaps, in light of it -- there are many opportunities for investors in the market today. The trick is knowing where to look.

Tamara Walsh (GoPro): Burdened with high short interest and a beaten-down valuation, this stock could rebound in a big way in 2016. It seems everyone is betting against GoPro these days. Shares of the mountable camera maker fell a jaw-dropping 82% in the past six months. Dismal sales of its Hero4 Session cameras and recent job cuts are to blame for the fallout.

However, with GoPro shares now trading below $11 apiece or near the stock's 52-week low, I believe the company is well positioned to reward patient investors in the year ahead. For starters, GoPro's growth story is far from over.

The company is set to release new products in the quarters to come including a 16-camera rig called Odyssey for shooting 360-degree footage. Investors could also see product refreshes for GoPro's HERO4 Black and HERO4 Silver cameras. Throw in a partnership with Google and the anticipated arrival of a GoPro drone later this year and we have a product pipeline that is far from dead.

There is also the possibility that GoPro becomes a takeover target at these levels. After all, what's stopping cash-rich Apple from scooping up the action-camera maker? With $200 billion on its balance sheet, the tech giant has plenty of scratch to buy GoPro at its current market cap of $1.5 billion. This could mean a nice premium for investors in GoPro stock.

More than 33% of GoPro's stock is currently sold short. Therefore, seemingly any upbeat news could trigger a short squeeze and send the stock higher. For these reasons, I believe the recent sell-off in GoPro is overblown and that the company presents an opportunity for investors in 2016.

The market has whipsawed Disney's stock due to concerns about cord-cutting affecting the future profitability of the company's largest and most profitable segment, cable networks and particularly the segment's crown jewel, ESPN. I'm not underestimating the threat that a modest number of subscribers dropping or trimming their large cable bundles presents to the sports cable network's profitability. Rather, I'm suggesting that the market is underestimating Disney's ability to overcome this challenge and its future growth prospects.

CEO Bob Iger has said that Disney would consider offering a stand-alone ESPN product, though not until 2020 at the earliest. This would allow Disney to recapture some of the former subscribers who love ESPN, but got tired of paying for many channels they don't watch.

Its studio entertainment segment is cruising at full throttle. Led by Star Wars: The Force Awakens in the No. 1 spot, Disney had three of the top-grossing films of 2015. The new Star Wars film is smashing box office records, and on track to potentially become the highest-grossing film of all time. This film is the first in a trilogy, so two more are on the docket for the next few years, along with two stand-alone Star Wars films.

Disney's domestic theme parks attracted record crowds throughout 2015, while park visitors continued to shell out more money. The parks and resorts segment has a huge catalyst for growth on the horizon: Shanghai Disneyland. The new Chinese park is on target to open this spring and is expected by some to draw up to 25 million visitors during its first full year -- a number that would dwarf the Magic Kingdom's.

With its treasure trove of beloved intellectual property, astute eye for acquisitions, and masterful ability to leverage its brands and franchises, Disney makes a compelling long-term investment.

Daniel B. Kline (Starbucks): Starbucks may seem like just a coffee company, but it's equally rooted in technology in a way that gives it a significant advantage over its rivals. Specifically, the chain has pioneered digital payment and now leads the way in Mobile Order & Pay.

While massive technology companies try to get people to adopt their payment systems Starbucks already has millions of people using its app to check out and to place as well as pay for orders without even standing in line. The company has invested heavily in building out its digital infrastructure and CEO Howard Schultz noted how it has begun to pay off in the company's Q4 earnings call.

"By anticipating and beginning to invest many years ahead of the mobile technology curve, Starbucks today is defining customer-facing and partner-facing mobile and retail experiences of the future," he said. "And the technology innovations we are introducing are further strengthening our brand, improving our efficiency and in-store execution, increasing our profitability, enabling us to further extend our lead over competitors and, most importantly, enabling us to deliver an elevated Starbucks experience to our customers."

Schultz went on to say that 21% of all transactions in company-owned U.S, stores were mobile. That's an impressive number given that Mobile Order & Pay was only rolled out in Sept. 2015 and Schultz was speaking on Oct. 30, 2015.

This base of digital users sets Starbucks up to remain competitive going forward. It allows stores to devote more resources to churning out orders and less to taking them. It also facilitates digital expansion like the company's partnerships with Lyft and Spotify.

Starbucks is a consumer goods stock to own partly because it's also a technology stock and that investment will keep customers flocking in, buying more, and even spending money when not in stores. It also gives the company a base to expand via delivery and in ways that have not yet been thought of.

Keith Noonan (Time Warner): If you're on the hunt for a consumer goods stock that offers long-term growth potential and an attractive dividend profile, Time Warner deserves a spot on your shortlist. Right now, the major question for potential Warner investors is whether shakiness in the company's TV business will be made up for by strength in its other segments. Knowing precisely how the complicated TV market will shift is difficult to predict, but overall it looks like Time Warner has the pieces in place to be a long-term winner.

This year, Fantastic Beasts and Where to Find Them will return audiences to the world of Harry Potter and Warner's DC Cinematic Universe will shift into high gear. The potential for explosive success is definitely there, and big wins for Warner's marquee 2016 films would set up even greater opportunities down the line.

Warner's video game business is already booming, and a strong presence for characters like Batman and Superman on the big screen could further invigorate its gaming slate. A strong entertainment push should also benefit the company's HBO segment -- which is still a leader in premium television thanks to milestone content including Game of Thrones -- and an expanding global entertainment market sets a favorable backdrop for Warner's overall content lineup.

On the valuation side, Time Warner currently has a forward price-to-earnings ratio of roughly 13, which could be attractive to long-term investors in light of its content strength and dividend. The company's yield sits at approximately 2%, and a payout ratio of 30% means it's reasonable to expect increases down the line.

With the benefits of returned income and a reasonable growth path, Time Warner could impress in years to come.

Joe Tenebruso (Boston Beer): Buying quality businesses when they're on sale can often be a recipe for outstanding investment returns. And I believe we have one such opportunity today with Boston Beer.

The craft brewer's shares have been cut nearly in half from their all-time highs reached in Jan. 2015. Concerns regarding increased competition and slowing growth have led to analyst downgrades and a sharp contraction in the stock's price-to-earnings multiple. 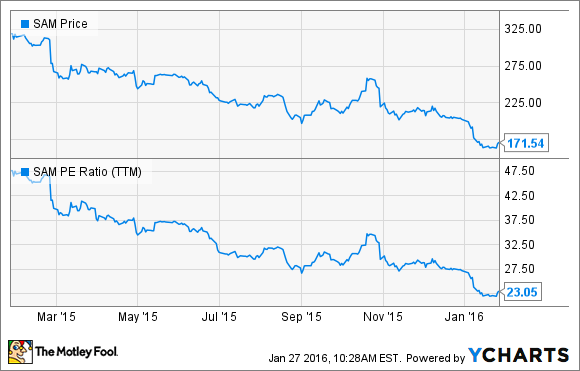 However, while Boston Beer's shares were admittedly trading at frothy levels back in early 2015, the stock is now much more reasonably priced at about 23 times trailing earnings and 21 times analysts' estimates for 2016. That's a fair price to pay for a best-in-class business that's expected to grow earnings at more than 17% per year over the next half decade.

Additionally, recent M&A activity in the alcoholic beverage industry also suggests that Boston Beer's shares could be worth substantially more to a larger competitor. Founder and Chairman Jim Koch has repeatedly spurned buyout offers in the past, but the possibility of a deal in the future should help to support Boston Beer's share price at current levels.

Regardless, Boston Beer remains well positioned to profit from the rising popularity of craft brewing, as well as increasing consumption of hard ciders and teas with its popular Angry Orchard and Twisted Tea brands. With more reasonable growth assumptions now reflected in its share price, long-term investors may wish to consider taking a sip of Boston Beer stock.