Please ensure Javascript is enabled for purposes of website accessibility
Log In Help Join The Motley Fool
Free Article Join Over 1 Million Premium Members And Get More In-Depth Stock Guidance and Research
By Adam Levine-Weinberg - Jan 29, 2016 at 10:30AM

The airline is on pace for another year of strong EPS growth in 2016.

It's not hard to understand investors' enthusiasm. While Hawaiian didn't post a massive earnings beat, it did report strong earnings growth for both the fourth quarter and full year. Most important, its outlook for 2016 is very promising, raising the prospect of more rapid earnings growth ahead. Let's take a look.

Fuel-driven earnings growth
In Q4, Hawaiian Airlines nearly doubled its adjusted pre-tax income to $79.2 million, up from $43.4 million a year earlier. Adjusted earnings per share more than doubled year over year, due to a reduction in Hawaiian's share count, reaching $0.85. This beat the average analyst estimate by $0.01.

Hawaiian Airlines' Q4 earnings growth was entirely driven by fuel cost savings. Economic fuel expense declined by more than $62 million year over year. This fuel cost savings was partially offset by a 3% decline in unit revenue and a 5.7% increase in non-fuel unit costs.

Fending off international headwinds
During 2015, Hawaiian faced the same revenue headwinds as legacy carriers like Delta Air Lines (DAL -2.26%). Airlines like Hawaiian and Delta have seen some of their fuel cost savings offset by lower fuel surcharges on international routes (especially in Asia) and the negative impact of the strong dollar on overseas ticket sales.

For example, Delta Air Lines reported that during the fourth quarter, lower fuel surcharges and the strong dollar combined to pressure its transpacific unit revenue by 13 percentage points. In that context, Delta's ability to limit its unit revenue decline in that region to only 2.9% was quite impressive.

Hawaiian Airlines had even more trouble on its transpacific routes than Delta. International unit revenue declined 18% year over year in Q4. According to Chief Commercial Officer Peter Ingram, this decline was entirely caused by declining fuel surcharges and the strong dollar.

Fortunately, this severe pressure on international routes was offset by strong results in the U.S. Unit revenue rose 2.8% year over year last quarter on mainland-Hawaii routes and rose 2.6% for flights within Hawaii.

The company expects continued strong performance on its routes to the mainland. Industry capacity is scheduled to increase only 5% year over year this quarter, compared to double-digit growth in much of 2014 and 2015. Meanwhile, interisland routes will continue to benefit from some schedule changes that Hawaiian implemented in mid-2015.

Meanwhile, international routes will be less of a drag on unit revenue this year. First, fuel surcharges have already declined so far that there isn't much downside left before they disappear entirely.

Second, the year-over-year impact of exchange rate fluctuations is decreasing significantly due to the stabilization of the yen -- Hawaiian's most important foreign currency -- against the dollar. In fact, while the yen rapidly depreciated against the dollar in the second half of 2014, it hasn't moved much for more than a year now. 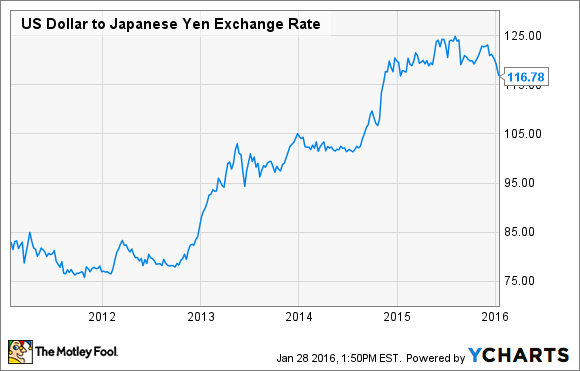 Improvements will continue
While it's too early for Hawaiian Airlines to provide revenue guidance beyond the first quarter, there is a good chance that unit revenue will start growing again in Q2.

Most importantly, industry capacity in Hawaiian's markets from the mainland to Hawaii is currently scheduled to decline 1% year over year in Q2, compared to 5% growth in Q1. That should bolster fares. Hawaiian will also likely face lower year-over-year headwinds from fuel surcharges and the strong dollar in Q2.

As a result, Hawaiian's profit margin could potentially expand more in Q2 than it will in Q1. Not surprisingly, this bullish outlook has driven sharp increases in earnings estimates. Analysts now expect Hawaiian Holdings' adjusted EPS to rise nearly 50% year over year in 2016 to $4.53. Just a few days ago, the average estimate was just $3.89.

As of the end of the day on Thursday, Hawaiian shares traded for less than eight times expected 2016 earnings. Based on the company's prospects for future growth and margin expansion as it adds the ultra-efficient A321neo to its fleet beginning in 2017, Hawaiian Holdings stock looks like a bargain at that price.

Adam Levine-Weinberg owns shares of Hawaiian Holdings, and is long January 2017 $40 calls on Delta Air Lines, and short April 2016 $38 calls on Hawaiian Holdings, The Motley Fool has no position in any of the stocks mentioned. Try any of our Foolish newsletter services free for 30 days. We Fools may not all hold the same opinions, but we all believe that considering a diverse range of insights makes us better investors. The Motley Fool has a disclosure policy.