Eaton Corp. has been trimming growth expectations all year long, but you should still look for some positives in the fourth quarter

Industrial conglomerate Eaton Corp. (NYSE: ETN) is set to issue earnings on February 3rd. If the ongoing and deepening global weakness through the first three quarters of 2015 was any indication, it won't be good reading. Here's the key things to watch for, including a few positives.

Getting worse as we go
Eaton started 2015 thinking it would see organic revenue growth of as much as 4% overall. By the end of the third quarter that number had fallen to an organic revenue decline of 1%. So you shouldn't be expecting much from the fourth quarter on the top line. While there's weakness throughout the company's portfolio, note that the hydraulics business remains the big standout to the downside.

Hydraulics has material exposure to the construction and agriculture markets, two areas that have been hard hit by the slowdown in China's economy. Don't look for things to get better here any time soon, but watch to make sure they don't keep getting worse. Other than that, the rest of the company should hold up reasonably well. However, if one of the other segments does stick out, dig a little deeper.

Action, reaction
So the top line should be weak, but the real question for Eaton will be, "What's being done about it?" On that score, the conglomerate has been restructuring its business to better align its costs with the current environment. It's the right thing to do. So you'll want to see what kind of progress is being made in those efforts, and if they have to do even more. That was a key takeaway from the third quarter, when Eaton added a new round to its earlier cost cutting efforts.

These are all important issues to watch, but there's something else that may be even more telling -- results. With a falling top line it will be hard to improve the bottom line, especially while Eaton is taking one-time charges for cost cutting efforts. So don't expect much on this front. But do pay close attention to cash flow.

In the third quarter, CEO Alexander Cutler noted, "Our operating cash flow in the third quarter was $973 million, a quarterly record, reflecting strong cost control and tight management of working capital." You can't expect that kind of result every quarter, particularly when Eaton is facing notable economic headwinds.

But the old saying that cash is king isn't just a meaningless expression. "Earnings" don't pay the bills or the dividends; cash does. Eaton appears to have done a good job generating the lifeblood of a business so far, but you'll want to scrutinize this metric to make sure that continues. 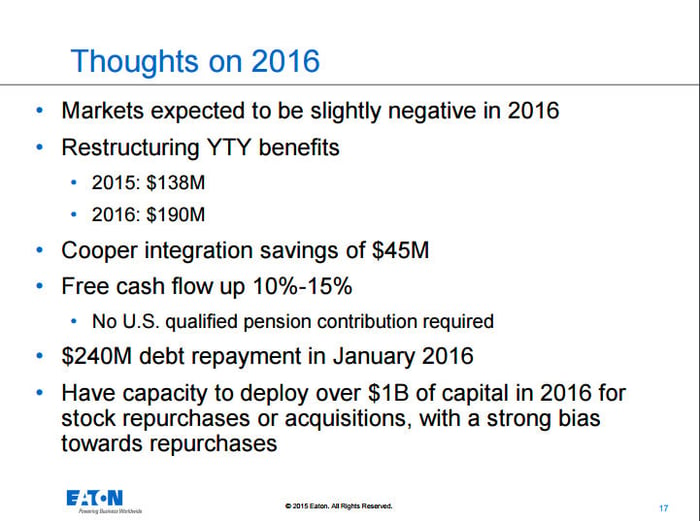 Eaton's thoughts on the future, from the third quarter. Source: Eaton Corp.

Two last thoughts
One other thing you'll want to listen for is acquisitions. Don't expect any big deal announcements because Eaton is still in a holding pattern after a particularly large acquisition a few years ago. But it's getting closer to the point where it should be able to start wheeling and dealing a little more freely again.

You'll probably have to listen to the conference call to get an insight here, but it's worth the effort. It could presage a new round of growth acquisitions or, perhaps, the divestiture of less desirable businesses (like hydraulics). Most important, however, a shift here would signal a new phase in Eaton's business plans -- one that the market has been waiting for.

As tough as this market has been on Eaton, it's still a financially strong company with the ability to take advantage of the downturn through some well-timed deal making. Note, on that score, the recent deal between Johnson Controls and Tyco International. One of the big pushes on this score for Johnson Controls has been to reduce its exposure to the automotive sector. It plans on spinning more of its legacy auto businesses off after the Tyco deal is complete. The addition of Tyco, then, bolsters its top line from the loss of the auto business. The two companies expect to have revenues of around $32 billion after they merge and the auto business is spun off. It would be nice if Eaton could do something similar, perhaps as part of a hydraulics spin off or sale.

In the end, Eaton's full-year 2015 results probably won't be very good. But how it's working through the headwinds, and the success its achieving in those efforts, is probably the most important issue to watch. From a longer term perspective, meanwhile, watch for a shift on the corporate front that could increase acquisition and disposition activity. After all is said and done, Eaton could easily end up a stronger company on the other side of this economic soft patch.