Please ensure Javascript is enabled for purposes of website accessibility
Log In Help Join The Motley Fool
Free Article Join Over 1 Million Premium Members And Get More In-Depth Stock Guidance and Research
By Matthew Frankel, CFP® - Jan 30, 2016 at 7:07AM

Visa may be a great company that happens to pay a dividend, but that doesn't make it a great dividend stock.

Don't get me wrong. I think Visa (V -1.43%) is a great company with fantastic long-term growth prospects. However, it doesn't meet the criteria most dividend investors use when picking stocks. Not only does the company pay a low 0.78% dividend yield ($0.56 annually per share), but the stock has an expensive valuation, more like a high-growth company than a stable dividend payer. With that in mind, here are two great dividend stocks in the financial sector you might want to consider instead.

More than just a payment processor
My favorite company in the payment processing business is American Express (AXP 0.97%), and there are several reasons. First, with Amex you get both sides of the business -- payment processing as well as the ability to profit from the interest paid by cardholders. Amex also has pricing power over rivals -- its affluent customer base allows it to charge higher swipe fees than Visa or MasterCard. Additionally, Amex has fallen by nearly 36% over the past year and is now trading at a share price not seen since early 2012 and at a price-to-book multiple not seen since 2009. 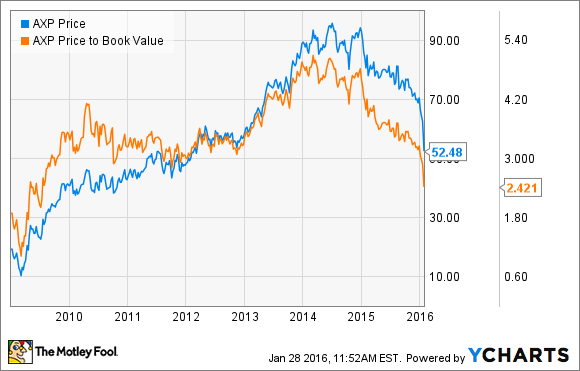 It's easy to understand why the market is pessimistic when it comes to American Express. In 2015, Amex lost its partnerships with Costco and JetBlue, and the Costco portfolio alone represents about 20% of the company's outstanding loans. 2015 revenue fell by 8% from the previous year, and net income dropped by 38% including restructuring and impairment charges.

However, I'm still bullish on Amex over the long run. The company is embarking on an aggressive cost-cutting initiative that is expected to produce $1 billion in annual savings by the end of 2017. And, the company is being proactive about buying back its own shares at a discount -- in 2015, the company bought back about 5% of its outstanding shares, and I wouldn't be surprised to see more of the same this year. The company has issued 2016 guidance in the range of $5.40 to $5.70, but this includes an anticipated gain from the sale of the Costco portfolio, so take these numbers with a grain of salt.

Still, the company's 2017 projection of "at least $5.60" per share in earnings implies that you can buy Amex for just 9.5 times next year's earnings, a great deal even when you consider the headwinds. And, in the meantime you'll be paid a 2.1% dividend -- not spectacular, but about three times Visa's payout.

For great bank stocks that pay dividends, look to the north
In general, the Canadian banking sector is much more stable than that of the U.S. In fact, while the U.S. has been through 14 banking crises over the past 180 years, Canada has only had two -- both were in the 1830s and were rather mild. My favorite Canadian bank right now is Toronto-Dominion Bank (TD -0.80%), known to most Americans as TD Bank.

TD emphasizes sound risk management, as well as capitalizing on growth opportunities. Over the past 15 years, TD has expanded rapidly into the United States, most notably with its 2008 acquisition of New Jersey-based Commerce Bancorp, from which it adopted the "America's Most Convenient Bank" branding.

In an age when many banks are figuring out ways to reduce the size of their physical branch network and automate as many banking services as possible, TD is doubling down on good old-fashioned customer service. The bank's locations are open later at night than peers, as well as on weekends (even Sundays), and the branch network is growing with smaller, more efficient branches.

You can see the success of TD's sound business model when you compare its history to some of the other big North American Banks. In fact, TD's earnings history (the blue line in the chart below) looks stable and predictable compared to Bank of America, JPMorgan Chase, and even rock-solid Wells Fargo -- especially in the 2008-2010 financial crisis period. And, this chart includes the effects of currency fluctuations on TD. 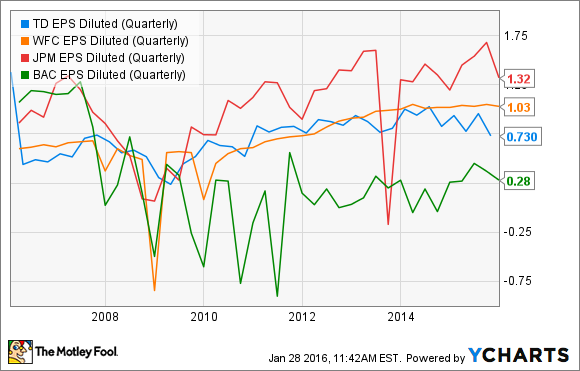 TD has grown its dividend at an annualized rate of 12% over the past 15 years, and has delivered 10.6% annualized total returns over the past decade – nearly triple the return of the overall North American banking industry. 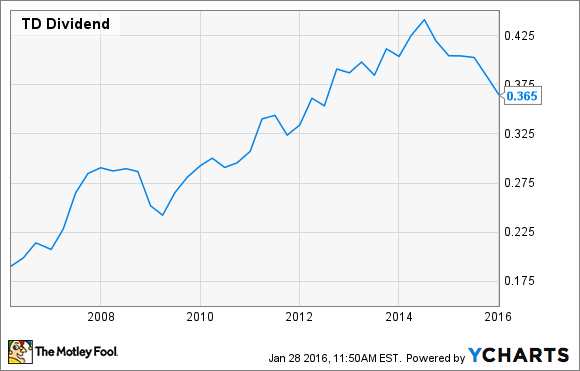 At first glance at the chart above, it may appear that TD has a shaky dividend history, but this is simply because the bank pays its dividend in Canadian dollars. Currency fluctuations may produce a higher or lower dollar-denominated payout, but rest assured that TD is committed to increasing its dividend, which has been paid since 1857 and currently stands at just over 4%.

When you look at these criteria, American Express and TD Bank certainly qualify. And, you can apply this to many other stocks to find the right dividend stocks for you.

Is Now the Time to Buy Bank Stocks?