The delivery specialist's stock looks cheap, but its bank account is running dry.

Share repurchases have been a major part of FedEx's capital allocation policy for the past few years. FedEx CEO Fred Smith boasted that the company has returned nearly $8 billion to shareholders since fiscal 2014 by buying back more than 57 million shares of stock. This has driven a significant reduction in FedEx's share count. 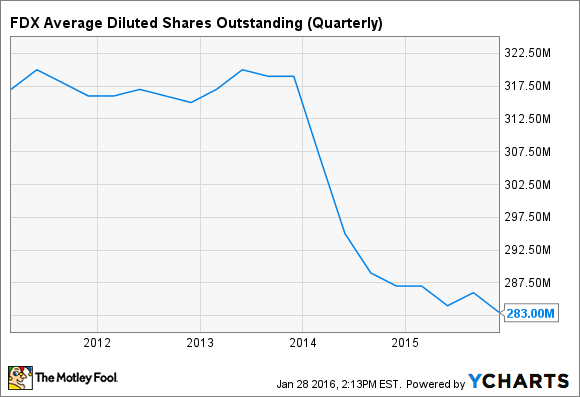 This seems like a great time for buybacks at FedEx, because the stock recently hit a multiyear low. There's just one problem: It's not clear where FedEx will get the cash to fund this new buyback program.

A good time for buybacks
Less than a year ago, shares of FedEx reached an all-time high around $185. Since then, the stock has lost more than 30% of its value, sinking below the $130 mark. 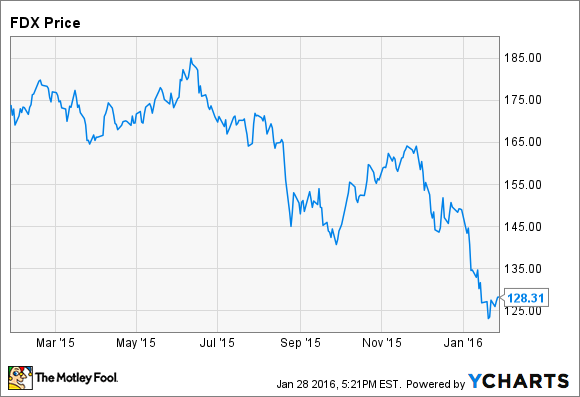 Investors appear to be worried about slowing economic growth across the world. However, in recent years, FedEx has shown itself to be adept at aligning capacity with demand in order to keep its profit margin high. Furthermore, low fuel prices are a significant earnings tailwind for FedEx.

FedEx stock currently trades for about 12 times expected earnings for the current fiscal year. Considering FedEx's strong brand and long-term growth opportunities, this seems like an unreasonably low valuation. As a result, it's probably a good time for the company to be thinking about repurchasing more stock.

Not much cash available
There's one big difference between now and late 2013, when FedEx first began repurchasing stock at a rapid clip. At the end of fiscal 2013, FedEx had $4.9 billion of cash and equivalents and less than $3 billion of debt. By contrast, as of the end of November, FedEx had only $3.6 billion of cash left, while its debt had ballooned to $8.5 billion.

FedEx doesn't produce that much free cash flow, either. Operating cash flow has improved in the past couple of years, reaching $5.7 billion over the past 12 months, but FedEx has been reinvesting heavily in the business. For the current fiscal year, FedEx expects to spend $4.6 billion on capex. 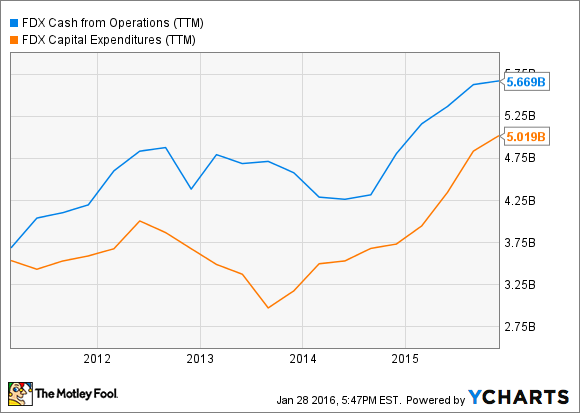 The company is likely to keep capex in the $4 billion to $5 billion range during fiscal 2017. Just last month, management told investors that FedEx Ground will keep capex steady at $1.6 billion next year, after previously projecting that capex for that segment could fall to $1 billion in fiscal 2017. This will continue to constrain free cash flow.

Most important, FedEx's purchase of TNT Express is set to become official within the next few months. FedEx will pay about $4.8 billion in cash to buy its European rival. Most of the purchase price will have to be funded with new debt, given FedEx's low cash balance and modest free cash flow production.

Where's the money?
FedEx would need to spend more than $3 billion to complete its 25 million share repurchase program, based on current market prices. Including the purchase of TNT Express, the total bill is around $8 billion. It could easily take FedEx five years to produce that much free cash flow.

Not surprisingly, credit analysts at Moody's said that the planned share repurchase was a "credit negative". That's the third credit-negative event that Moody's has noted in the past year. There is a good chance that FedEx's credit rating will be cut in the near future due to its quickly rising debt balance.

FedEx may be willing to stomach one or more credit rating downgrades simply because its stock seems quite cheap right now. However, management should be careful. If FedEx issues too much debt to finance share buybacks, it could be vulnerable in the event of a more severe global economic downturn.

Adam Levine-Weinberg has no position in any stocks mentioned. The Motley Fool recommends FedEx. We Fools may not all hold the same opinions, but we all believe that considering a diverse range of insights makes us better investors. The Motley Fool has a disclosure policy.

Is FedEx a Good Dividend Stock After the Biggest Single-Day Crash in Company History?
376%