Coming into its Q4 earnings report last week, American Airlines (NASDAQ:AAL) had reported a record profit in each of the eight quarters since it merged with US Airways in late 2013.

On Friday, American made it nine in a row. The company produced an adjusted pre-tax profit of $1.29 billion in Q4, up from $1.10 billion a year earlier. Adjusted earnings per share soared 32% from $1.52 to $2.00, lifted by American Airlines' heavy share buyback activity in addition to its net income growth.

Even as American Airlines has continued generating strong EPS growth, investors have clearly lost confidence in the company due to its persistent unit revenue declines. However, American Airlines may be in better shape than many people realize.

Earnings and the stock price diverge
In 2013, American Airlines and US Airways earned a combined adjusted profit of $1.9 billion. Since then, the combined company's profit has soared. Adjusted net income reached $6.3 billion last year as American Airlines reaped the full benefit of lower fuel prices.

Up until early 2015, American Airlines' stock price rose along with its earnings. However, in the past year or so, American Airlines stock has started to lose ground even as the company's profit continued to rise. 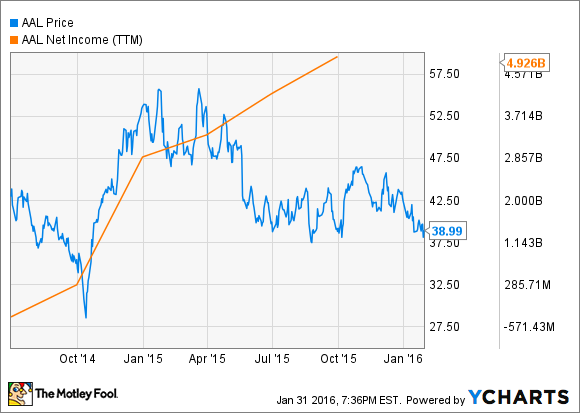 Airline investors don't seem to treat earnings growth driven by fuel cost savings as "real" when it is accompanied by declining unit revenue. And American's passenger revenue per available seat mile (PRASM) came under severe pressure in 2015, due to the strong dollar, economic weakness in key foreign markets like Brazil and Venezuela, and rising competition from Southwest Airlines (NYSE:LUV), particularly in Dallas.

PRASM dropped 1.7% in Q1 2015 and the declines accelerated from there. For the full year, PRASM fell 5.4% year over year. As unit revenue trends headed south, so did American Airlines' share price. With PRASM expected to decline 6% to 8% in Q1, it's not surprising that the stock hasn't recovered.

First, year-over-year comparisons will get much easier after this quarter. As noted above, American's PRASM fell 1.7% in Q1 2015. In Q2, the pace of decline worsened to 6.9%, and it remained at a similar level for the rest of the year.

Second, competitive dynamics will improve in the second half of 2016. Southwest Airlines operated 153 daily departures in Dallas at the beginning of 2015, but it ramped up its schedule to 180 daily departures by August.

As a result, American won't fully lap the impact of increased competition from Southwest until this August. However, after that, it should benefit from capacity constraints that will prevent Southwest Airlines from adding any more flights in Dallas.

Third, weakness in Brazil and Venezuela will have less of an impact on American Airlines going forward. American Airlines President Scott Kirby noted that Brazil represented more than 6% of the company's revenue in late 2013 but just 2% by last November. Additionally, the 2016 Olympic Games in Rio de Janeiro should provide a boost in travel to Brazil during Q3.

Fourth, American completed its reservation system integration in October, which will allow it to refine its flight schedules to put the right airplanes in the right markets. This should unlock about $300 million in annual revenue synergies over the next year or two.

Looking ahead
Thus, American Airlines has a number of key catalysts coming in the next two or three quarters that should improve its unit revenue performance. It also has other initiatives in the works that should bolster unit revenue beginning later in 2016.

For example, American will introduce the first true long-haul premium economy section among U.S. airlines in late 2016. This will offer a middle-ground for customers who are willing to pay extra for a more comfortable seat but can't afford a business class ticket.

American Airlines is also following its peers by moving from a miles-based to a spending-based loyalty program in late 2016. This could have revenue benefits because it will result in fewer award tickets for customers who buy the lowest fares.

With all of these catalysts ahead, American Airlines' unit revenue trajectory should improve steadily going forward. With the stock trading for less than 6 times forward earnings, there's plenty of upside if investors gain confidence that American's recent profit growth won't be swallowed up by revenue declines in the next few years.