This specialty refiner has been beaten down to incredible levels, resulting in a sky-high yield. Here's why it's well earned and why you should probably stay away from this value trap.

The most severe oil crash in 50 years has devastated numerous energy stocks, but most refiners have been spared the worst of the carnage because low oil prices usually boost their margins. This hasn't been the case with specialty refiner Calumet Specialty Products Partners (CLMT 1.49%), which the market has bludgeoned, pulling it down to its lowest levels since the financial crisis. 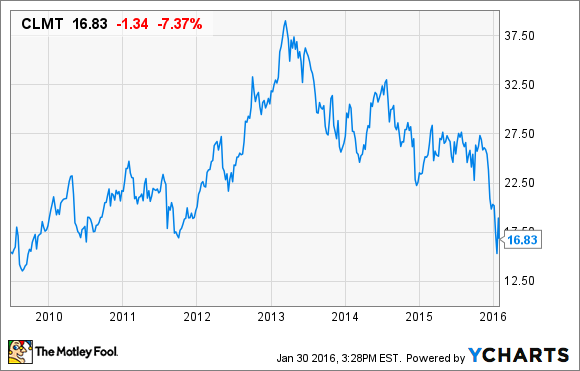 This unit-price crash has resulted in a sky-high yield that may tempt many income investors. However, such a high yield also represents the market's opinion that the current payout is likely facing an imminent cut. Let's look at two reasons that I no longer have faith that Calumet represents a great long-term income opportunity and may instead be a value trap..

Calumet has never exactly been a high-priced MLP. However, at today's six year lows, it's trading especially cheap. As history's greatest investor, Warren Buffett, once famously said, "It's far better to buy a wonderful company at a fair price than a fair company at a wonderful price."

So why don't I consider Calumet a wonderful company? Because of the thing that matters most to dividend investors -- the payout profile.

MLPs such as Calumet are all about income. However, successful long-term income investing requires looking at more than just yield. Payout sustainability and long-term realistic growth prospects are equally, if not more, important.

From that perspective, Calumet's payout profile leaves a lot to be desired. Specifically, it's struggled to maintain a minimal sustainable distribution coverage ratio -- the best metric for measuring long-term distribution sustainability -- of 1.0 over the past three years. In fact, only the recent margin-boosting effects of super-low oil prices have allowed it to secure the current payout.

Oil prices are certain to recover eventually, and when they do, margin compression is likely to severely hurt distributable cash flow. This makes analyst five-year distribution growth projections of 6.5% CAGR not just unlikely but, from a long-term perspective, a very bad idea.

That's because Calumet needs to emphasize growing its coverage ratio over time. Doing so would serve two vital purposes. First, it would create a cushion to decrease the risk to the current payout when cyclical refining margins decline.

As importantly, it would create a stream of excess DCF, which the MLP could use to pay down its debt and fund more growth projects and acquisitions internally, rather than rely entirely on the debt and equity markets. Which brings me to the likely reason Wall Street has crushed Calumet's unit price so badly.

Calumet has an incredibly leveraged balance sheet, and since it pays out almost all its DCF to investors, it's entirely reliant on external funding sources for both growth capital and refinancing its debt. Historically, the MLP has funded growth pretty evenly, which is where its main problem now lies.

With its unit price so low, it can't sell more units to fund growth, which means it must rely purely on debt markets. However, because of its already large debt burden it has a "B+" credit rating from Standard & Poor's. That junk credit rating explains Calumet's high debt cost.

Given that the Federal Reserve continues to signal long-term interest rates are likely to go up over time, Calumet's weighted average cost of capital will probably rise over time. With its return on invested capital already very low, this makes further profitable growth difficult. That, in turn, could make growing the DCR high enough to sustain the current payout before the next refining industry downturn virtually impossible.

In the meantime, Calumet's complete reliance on its creditors means that they may pressure the MLP to slash or even eliminate the payout to use cash flow to pay down its debt.

Bottom line
Despite the recent completion of Calumet's multi-year organic growth initiative -- which may very well preserve the distribution in the short-term -- I believe that Wall Street's high-yield is warranted.

Calumet's highly leveraged balance sheet, high cost of debt, and current lack of access to equity capital markets means that future profitable growth could be limited. With its historic difficulty in maintaining a sustainable level of DCF relative to its enormous payout, income investors must understand that this is a highly speculative investment.

With so many midstream MLPs -- with far more stable business models and more sustainable distributions -- yielding 15%-plus, I think there are far better high-yield choices available in today's market.