Please ensure Javascript is enabled for purposes of website accessibility
Log In Help Join The Motley Fool
Free Article Join Over 1 Million Premium Members And Get More In-Depth Stock Guidance and Research
By Daniel B. Kline – Feb 2, 2016 at 7:11AM

The market didn't care much for the company's earnings report.

Investors clearly didn't like what eBay (EBAY -2.33%) had to say when it reported Q4 and full-year results on Jan. 27, because its stock, which had been steady all month, dropped precipitously after the numbers came in. 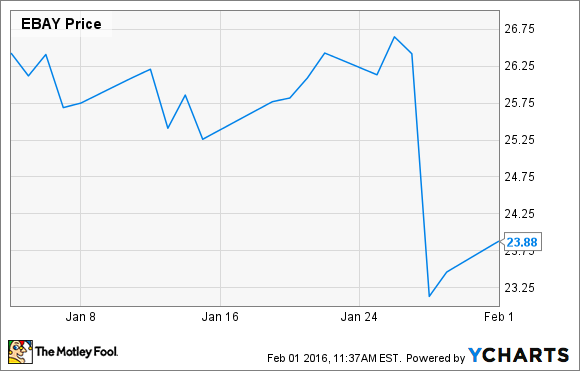 You can see where the stock falls off a cliff. Source: YCharts.com

What: The challenge for eBay is that since it split from PayPal the company is being judged largely by how its signature marketplace performs. Those numbers weren't bad in Q4, where the marketplace had $20.7 billion in sales that produced $1.9 billion in revenue for the company, down 3% on an as-reported basis.

That sort of ho-hum result overshadowed positives elsewhere in the company's earnings report because with PayPal no longer part of the picture, to many people watching the stock, eBay is its marketplace.

So what: Weinstein is probably right that as a sales platform, eBay has lost some of its magic. Auctions are no longer a novel concept, and there's nothing unique about just being a another place to sell stuff. But just because the company had a mildly disappointing quarter doesn't mean it's heading on a downward spiral.

In fact, though it will take take time to build its other platforms and change consumer and analyst perceptions, eBay actually has some growth areas. Its StubHub platform earned the company $232 million in Q4, up 34%. In addition, classifieds "delivered another quarter of accelerating growth with revenue of $183 million, up 15% on an FX-neutral basis and up 2% on an as-reported basis with strong performance in Germany and the United Kingdom," according to the earnings release.

Now what: eBay is in a period of transformation. The company probably knows that it has growth problems in its core marketplace, but that's why it's building up StubHub and other sources of revenue. This is one slightly negative earnings report, not an indictment of the company's business model or a sign of a collapse to come.

The company has some work to do, as it needs to continue to find ways to leverage its auction and sales platform to grow new businesses. It succeeded in doing that well enough with PayPal to make a spinoff logical. There's reason to believe that given time, the company can stop the bleeding and return to a growth path.

Daniel Kline has no position in any stocks mentioned. He has had mixed experiences buying on eBay and has sometimes purchased things he no longer wanted by the time they arrived. The Motley Fool owns shares of and recommends eBay and PayPal Holdings. Try any of our Foolish newsletter services free for 30 days. We Fools may not all hold the same opinions, but we all believe that considering a diverse range of insights makes us better investors. The Motley Fool has a disclosure policy.