Please ensure Javascript is enabled for purposes of website accessibility
Log In Help Join The Motley Fool
Free Article Join Over 1 Million Premium Members And Get More In-Depth Stock Guidance and Research
By Tyler Crowe – Feb 4, 2016 at 8:15AM

After three straight quarters of strong results, lower refining margins, some extra planned expenses, and some less than stellar news from MPLX LP left an unpleasant aftertaste to 2015's results.

The first three quarters of 2015 may have been great for Marathon Petroleum (MPC 6.47%), but it couldn't quite continue that momentum throughout the year, as the company ended 2015 with much more muted results. Let's take a quick look at the numbers, recap some of the highlights from Marathon's end to 2015, and see what investors should be watching for in the near future.

By the numbers: Quarterly results (in millions, except per-share data)

Revenue for a refiner isn't the best gauge of health, since its sales product and its crude oil costs are highly variable and more or less move in tandem. So the more indicative top-line numbers to look at are those for EBITDA. In this case, the company saw a pretty large decline, as the price of refined products fell at a faster rate than the price of crude and lowered margins. Marathon's gross margin on refining and marketing declined 16% compared with this time last year. Also, the company ran up some higher turnaround costs because of some planned maintenance and turnaround at one of its Midwest refineries.

Another element baked into those EBITDA numbers is a $370 million writedown on inventory values. This is a non-cash expense, and the value of inventories will vary from quarter to quarter without too much impact on operations.

Even though this quarter's earnings didn't live up to prior quarters, 2015 still proved to be a good one for the company overall. It ended the year with earnings per share coming in at $5.26, compared with $4.39 in 2014.

Catching up on the business this quarter

What management had to say
Overall, despite the headwinds from lower refining margins, Marathon's operations were pretty solid. However, the real buzzkill came when CEO Mike Herminger mentioned that the company was scaling back its growth plans for MPLX:

"Given current market conditions, more modest growth in volumes of natural gas and natural gas liquids, the increase in MPLX's yield and the impacts to its valuation, MPLX is now forecasting distribution growth of 12% to 15% for 2016, which is among the highest for large-cap, diversified MLPs."

I'm sure that he threw in that highest for large-cap MLP comment because he wanted to sugarcoat the fact that the company is cutting distribution guidance by close to 50% for the year, and by the sounds of it, 2017's guidance could get cut as well.

On the outlook
According to Marathon's guidance for the coming quarter, investors should be ready for a much more muted performance than in the first quarter of 2015. Not only will the company probably be facing even lower refining margins as the price spread between refined products and crude continues to contract, but Marathon also plans on doing some turnaround work on its facilities in the quarter that will lead to higher per-barrel charges and lower throughput volumes. 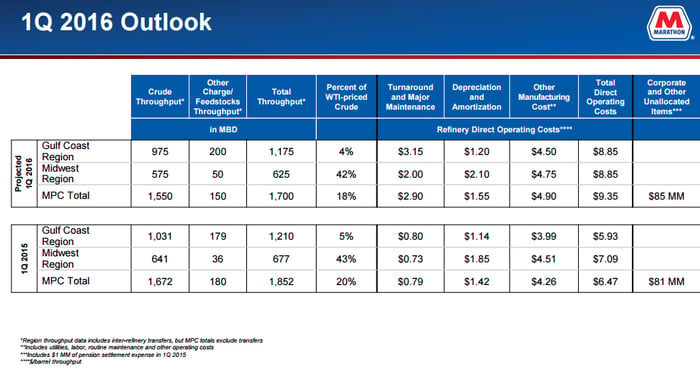 10-second takeaway
From a refining and marketing aspect, Marathon was more a victim of the market that sent earnings down as much as it did. The company had some higher costs and lower volumes because of planned maintenance, but that's part of doing business. So investors shouldn't panic too much about its results.

The one thing worth watching, though, is how the situation with MPLX shakes out. The recent private unit exchange is a bit of an admission that it can't raise capital through equity issuances right now, and with its multibillion-dollar expansion plan under way, it will need all the access to capital it can get. So in the coming weeks, it may be worth checking back in to see what MPLX and Marathon do to address this issue.