The data-storage specialist lost its CFO last month to a tech peer. 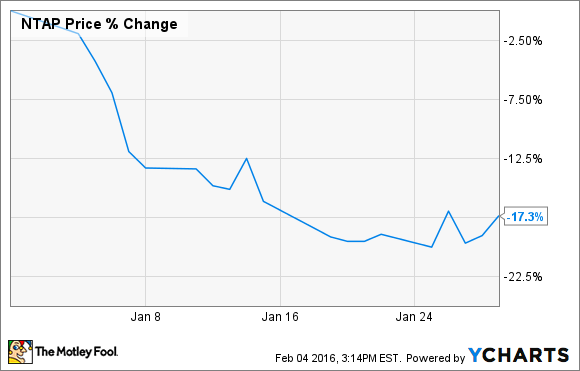 What: Shares of data storage company NetApp (NTAP -0.43%) got demolished in January, down by 17.3% according to Capital IQ data, after the company lost its CFO.

So what: NetApp announced some organizational changes within its finance department at the beginning of January. The company said it would flatten and streamline the structure of the company's organizational hierarchy, leading to greater efficiency. But the real bombshell was that CFO Nick Noviello was leaving the company "to pursue another opportunity."

Now what: VP of corporate finance Jeffrey Bergmann stepped up to assume the role in the interim as the company searches for a permanent replacement. The company said it would consider both internal and external candidates to fill the role. Noviello left to join Blue Coat Systems. At the same time, NetApp reaffirmed its guidance for the fiscal third quarter, expecting revenue to be in the range of $1.4 billion to $1.5 billion. Adjusted earnings per share should be $0.66 to $0.71.