Please ensure Javascript is enabled for purposes of website accessibility
Log In Help Join The Motley Fool
Free Article Join Over 1 Million Premium Members And Get More In-Depth Stock Guidance and Research
By Joe Tenebruso - Feb 9, 2016 at 9:25AM

These key areas will help determine if the cybersecurity leader's stock can rebound in the days ahead.

The past six months were brutal for FireEye (MNDT 0.09%). Investors' fears regarding slowing growth and intensifying competition pummeled the cybersecurity specialist's stock price, with shares plunging more than 70% since August. 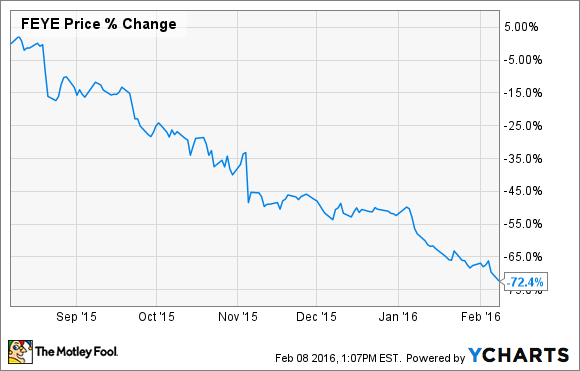 FireEye is scheduled to report its fourth-quarter results on Feb. 11. Does more pain lie ahead? Or can FireEye's stock begin to recover? Here are some key metrics that will likely help to determine the answer to those questions.

Management's 2016 billings forecast
Billings growth is a primary driver of FireEye's stock-price performance. Here's how the company defines billings in its most recent annual report:

Billings is a non-GAAP financial metric that we define as revenue recognized in accordance with generally accepted accounting principles, or GAAP, plus the change in deferred revenue from the beginning to the end of the period. We consider billings to be a useful metric for management and investors, as a supplement to the corresponding GAAP measure, because billings drive deferred revenue, which is an important indicator of the health and visibility of trends in our business, and represents a significant percentage of future revenue.

In its third-quarter earnings release, FireEye issued guidance for fourth-quarter billings in the range of $240 million to $260 million. Subsequently, on Jan. 20, FireEye announced preliminary Q4 financial results, and said that billings would come in near the top end of that range at between $256 million and $257 million. More importantly, Chairman and CEO David DeWalt said that the company expects to "grow billings organically by 20%" in 2016.

When FireEye reports its Q4 results, investors will be on the lookout for any additional comments by management related to its full-year 2016 billings outlook, particularly in regards to how acquisitions -- such as FireEye's recent purchase of cyber intelligence company iSight -- could supplement the company's organic growth.

Cash flow generation and the path to profitability
FireEye is not yet profitable. The company is investing aggressively in capturing market share in the booming cybersecurity market -- a strategy that has led to impressive revenue growth, but also heavy losses in recent years.

In 2014, FireEye had a net loss of $444 million, and negative operating cash flow of $131 million. However, in its preliminary Q4 results, FireEye said that it expects to generate between $7 million and $9 million in operating cash flow in the fourth quarter, which would bring its full-year 2015 total to between $35 million and $37 million. Better still, management now believes that FireEye can achieve positive free cash flow in 2016.

Investors will be eager to hear more about FireEye's improving cash flow situation during its Q4 conference call, as well as the company's progress toward achieving profitability.

How to access FireEye's results
FireEye will announce its fourth-quarter financial results on Thursday, Feb. 11, at approximately 4 p.m. ET. Investors can tune in to its live conference call, where management will discuss the quarter's results at 5:00 p.m. ET. Both the release and a link to the conference call will be available at the company's investor relations website.

Joe Tenebruso has no position in any stocks mentioned. The Motley Fool owns shares of and recommends FireEye. Try any of our Foolish newsletter services free for 30 days. We Fools may not all hold the same opinions, but we all believe that considering a diverse range of insights makes us better investors. The Motley Fool has a disclosure policy.