Please ensure Javascript is enabled for purposes of website accessibility
Log In Help Join The Motley Fool
Free Article Join Over 1 Million Premium Members And Get More In-Depth Stock Guidance and Research
By Tyler Crowe - Feb 10, 2016 at 8:15AM

It's hard to get excited about a rig owner when rig activity is at its lowest in 17 years.

What: Shares of Nabors Industries (NBR -3.10%) declined more than 13% in January as the market for land rigs continues to decline. The company's decline was even in the face of an analyst upgrade from Jefferies.

So what: As a contractor of mostly land rigs. Nabors Industries will see its prospects come and go with overall drilling activity. And frankly, drilling activity is in the dumps right now. In January alone, Baker Hughes' weekly rig count survey estimates that active rigs declined by 11% in January to 619. At this point we are close to the lowest rig count since 1999, the last time oil and gas went through a prolonged oversupply of oil. 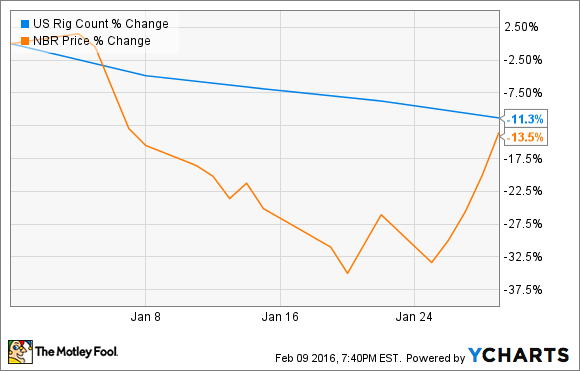 Nabors does have some rigs outside the U.S. as well, but the story there is eerily similar to what it is here. There isn't a lot of appetite to drill new wells, so Nabors is forced to idle many of its rigs as well as take lower day rates for the few rigs that it can find new work for. Even the upgrade from Jefferies was a bit of a backhanded compliment. In the analyst note, it basically said that the company will continue to face major headwinds in the coming months, but the only reason it was upgrading the stock was that it thinks the pessimism is baked into the stock right now.

Now what: Nabors, like almost every other drilling contractor, could really use a recovery in oil prices. However, that may be a little while. Most of the executives from the major oil services companies don't expect a significant rebound until the end of 2016 and will probably take longer for drilling activity to pick back up as producers need to shore up their balance sheets after bleeding cash for so long. That probably means Nabors' shares won't see any relief anytime soon, so don't feel as if you have to look at shares of Nabors now fearing that you're missing out on such low share prices.