Find out what the future likely holds for investors in America's largest pipeline operator and if it's worth buying shares today.

To say that Kinder Morgan (NYSE: KMI) has fallen victim to the worst oil crash in half a century is an understatement. Over the past year, its shares have plunged far worse than its peers, as the former dividend growth golden child was forced to slash its payout 75%. 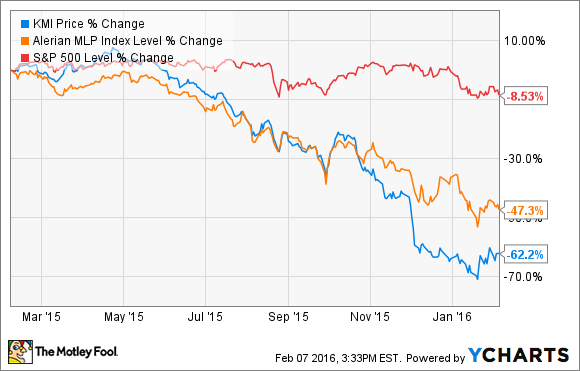 With its yield now a modest 3.2% is it worth it for investors to buy (or at least continue holding) this fallen pipeline blue chip? To answer that question let's take a look at the company's most recent earnings results, but more importantly its guidance for the future, to see how management plans to right the ship in a world of much lower energy prices.

More importantly for long-term investors, Kinder's painful, but necessary dividend cut now means the company is much better suited to continue growing while waiting for energy prices to inevitably recover.

Kinder is now a cash generating machine
The reason Kinder had to cut its dividend was to internally fund its large backlog of growth projects with excess cash flow, given that rating agencies were threatening to cut its credit rating to junk.

This would have greatly increased the cost of borrowing, either to grow or refinance its existing mountain of debt. In addition, with its share price collapsing raising growth capital in equity markets would have made this funding source unprofitable.

However, now with the painful dividend cut out of the way Kinder expects to generate $3.6 billion in cash flow in excess of its dividend for 2016. This extra cash is more than enough to cover management's expected $3.3 billion in capital spending and with the recently announced securing of $2 billion of unsecured loans (mostly to refinance existing debt) management believes it won't need to access additional debt or equity markets "for the foreseeable future beyond 2016."

But two main risks remain
Before you run out and load up on cheap shares of Kinder, understand that two major risks factors still threaten the company's investment thesis.

First, Kinder's projected $4.7 billion in 2016 distributable cash flow is based on certain assumptions of energy prices, which we all know can be insanely volatile and highly unpredictable in the short term.

Kinder has a projected 2016 $300 million cash flow difference between dividend costs and planned capital spending. This cushion means lower energy prices aren't likely to force a further reduction in the dividend or capital spending, but it might limit the ability to pay down its high debt load.

However, the biggest threat Kinder faces is longer-term: its fast shrinking project backlog. This is part of management's strategy of "high-grading" its backlog by focusing only on the projects that are likely to be most profitable in a low energy world. In the last quarter, this strategy caused Kinder's backlog to shrink by $3.1 billion from $21.3 billion to $18.2 billion.

Management also warned that further backlog cuts are likely in the coming quarters. One of these may end up being Kinder's long-delayed $5.4 billion Trans Mountain Pipeline. The Canadian government just announced it might not make a decision on final approval for this project until the end of 2016.

Should Canada's new environmental review process mean that this pipeline doesn't get built, than Kinder's backlog could find itself reduced 30% overnight to $12.8 billion. With further backlog reduction likely this year, it's possible that the company's once mighty growth backlog, which peaked at $22 billion in mid-2015, could find itself reduced by over 50% in just an 18 month period. That in turn could greatly reduce its long-term growth potential.

Bottom line
Kinder Morgan is certainly much better positioned to survive the ongoing oil crash, and if you already own shares there isn't much reason to sell. That being said, given its still highly leveraged balance sheet and ever shrinking backlog, income investors may want to look elsewhere for companies in strong financial shape and higher yields such as Enterprise Products Partners or Magellan Midstream Partners, both of which are guiding for continued distribution growth.

Adam Galas has no position in any stocks mentioned. The Motley Fool owns shares of and recommends Kinder Morgan. The Motley Fool recommends Enterprise Products Partners and Magellan Midstream Partners. Try any of our Foolish newsletter services free for 30 days. We Fools may not all hold the same opinions, but we all believe that considering a diverse range of insights makes us better investors. The Motley Fool has a disclosure policy.