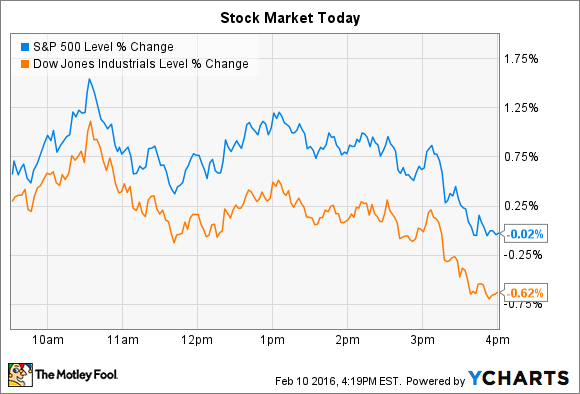 In a report to Congress this morning, Federal Reserve chair Janet Yellen acknowledged gathering headwinds to economic growth that include "declines in broad measures of equity prices, higher borrowing rates for riskier borrowers, and a further appreciation of the dollar." Foreign economic developments also pose a risk to the economy, especially slowing growth in China, she said.

If these factors trip up GDP or job growth, then the Fed stands ready to shift from its proposed interest rate hiking plan. "If the economy were to disappoint, a lower path of the federal funds rate would be appropriate," Yellen said .

The House of Mouse posted record sales and profit figures as it enjoyed strong growth in every piece of its entertainment empire -- except the media business (more on that in a moment). The strongest divisions were studio entertainment and consumer products, which together contributed $600 million of additional profits and helped Disney generate $4.2 billion of operating income – a 20% jump over the prior year period.

Blockbuster global demand around Star Wars: The Force Awakens powered most of those gains, and investors must be pleased that there are several more years of fresh movie installments on deck in this franchise.

But the media business, Disney's biggest segment, was its worst performer on both the top and bottom lines: Sales rose by just 8% as profit declined by 6%. The company said lower ratings and declining cable subscriber figures offset growth in advertising prices. That slip was enough to provide ammunition for bears who believe they're seeing evidence that Disney's ESPN cash cow is headed for a long period of slow decline.

Operating income dove by 15% at Turner as a 22% spike in programming costs met with flat sales growth. Like Disney, Time Warner called out declining cable subscriber figures as a reason for the weak profit performance. The operating drop was big enough to push overall profitability down to 20% of sales from 21% a year ago.

Yet Time Warner issued guidance that forecast strong overall profit growth in 2016 following what CEO Jeff Bewkes called "another very successful year in 2015." The company should earn $5.35 per share, management said, which was ahead of consensus estimates projecting $5.26 per share.

However, given that the Turner broadcasting division just had one of its weakest earnings quarters in years, it's unclear how dependable of a profit engine that segment will be as cable content delivery cedes more ground to Internet-based rivals.