What: 3D Systems (DDD -0.68%) surprised investors on Thursday morning by releasing preliminary fourth-quarter results that were much better than feared. At one point near the open of the market, the stock traded 14% higher. The news initially lifted rival Stratasys (SSYS -2.00%) modestly higher.

So what: Prior to the release, fears were heightened that the customer spending slowdown that 3D Systems and Stratasys experienced throughout the first nine months of 2015 would be more pronounced in the fourth quarter. Instead, 3D Systems announced that fourth-quarter revenue will fall by about 2.4% year over year to $183 million. Sequentially, sales should rise by an encouraging 20.7%. The Wall Street consensus reflected deeper pessimism, which called for the 3D printer maker's fourth-quarter sales to drop over 14% to $161 million.

To be clear, it wasn't all good news. 3D Systems also announced that it will take a significant writedown of its goodwill and intangible assets -- to the tune of $510 million to $570 million -- and a $27 million inventory charge to exit the consumer 3D printing business. At the close of the third quarter, 3D Systems carried $890 million of goodwill and intangible assets and $138.2 million of inventory on its balance sheet. 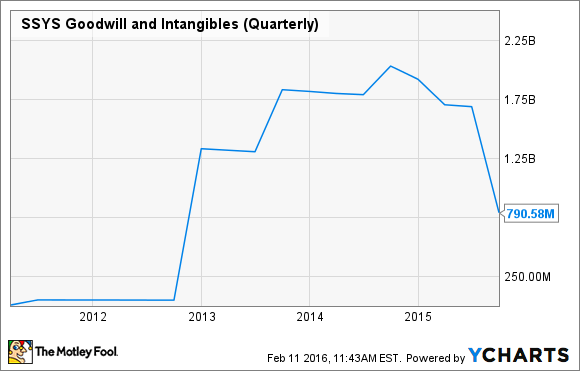 Of course, this shouldn't be taken to mean that 3D Systems is in good company. Both clearly overestimated the growth they could achieve by making acquisitions at rich premiums, which is carried on the balance sheet under goodwill and intangible assets.

Now what: Judging by 3D Systems' move higher, investors were likely encouraged by its sales results. However, the large writedown strongly suggests that management has admitted that its multiyear, hyperaggressive acquisition strategy was ill-advised.

3D Systems is scheduled to report its final fourth-quarter earnings and host an earnings conference call on Feb. 29 before the market opens. At that time, investors will get more information to determine whether the industry slowdown has shown signs of stabilizing and if the company is potentially turning a corner.