The package delivery giant had a good holiday season, and continues to outperform FedEx Corporation while dismissing worries over competition from Amazon.

As I write this, United Parcel Service (UPS 0.78%) stock is up year to date. Not only that, but it's significantly outperforming its main rival, FedEx Corporation (FDX -3.04%), even while speculation mounts over the threat of losing business to, and more importantly from, Amazon.com (AMZN -2.49%). I decided to take a look at the recent earnings and conference call to see what's going on. 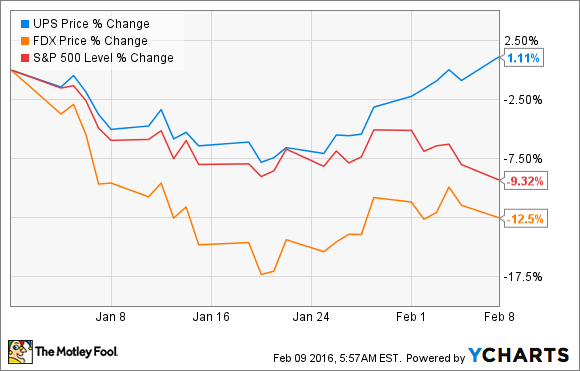 Peak performance
Following the disappointments of the last two years, UPS managed to deliver a relatively trouble-free fourth quarter. Two years ago, FedEx and UPS suffered network disruption due to a combination of poor weather and surging e-commerce volumes during peak demand periods in the holiday season. However, last year FedEx executed successfully while UPS floundered due to failing to manage costs during peak.

The contrast served to build a risk premium into holding UPS over FedEx. For example, you can see in the chart below how the traditional enterprise value (market cap plus net debt) to earnings before interest, tax, depreciation, and amortization, or EBITDA, gap between UPS and FedEx closed at the start of 2015. The good news (for UPS shareholders) is that it's widened again in recent months as it became clear that UPS was handling peak demand well. 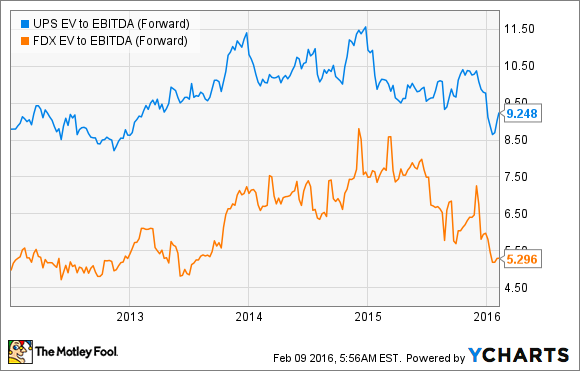 Amazon dual threat?
E-commerce brings opportunities but also threats, and some speculators believe Amazon's building out of its own delivery networks could threaten UPS and FedEx, as well as reduce deliveries through their networks. Indeed, the subject came up on the earnings call. Here is UPS CEO David Abney's reply to a question on  Amazon:

Our goal with Amazon or any other big customer is to continue to show our value through the integrated network and through our technologies and to have a value proposition that's difficult to match. We do add capacity and for large customers such as Amazon, we do it though we ensure we have the proper economic return.

In fact, UPS has been implementing measures, such as wide-scale dimensional weight pricing and specific pricing initiatives during peak times, in order to better generate returns rather than focus purely on improving volumes.

Investing conclusion: Don't worry about Amazon. UPS is managing its service to customers in order to deliver profitably. It may make sense for Amazon and others to make some less profitable deliveries, but UPS is optimizing its own profitability.

Indeed, air (next-day air and deferred) average daily package volume grew by double digits in the quarter, but ground (which made up 71% of U.S. domestic revenue and 45% of total company revenue in 2015) only grew 0.4%. You can see the ongoing dynamics in the ground business below. 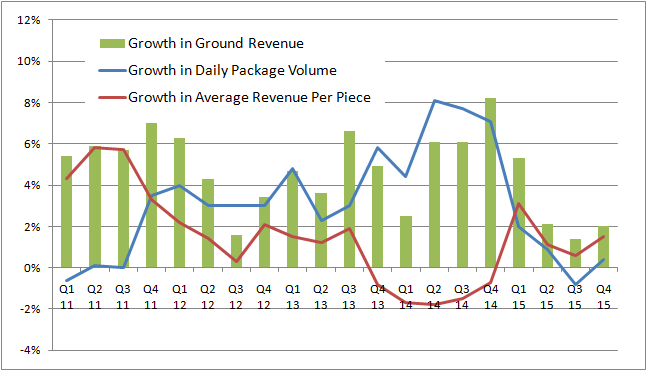 Investing conclusion: In the last two years, UPS grew its ground volume by 5.8% and 7.1% in the fourth quarter, so the slowdown in volume growth (while profits increased) is further indication that UPS prefers to optimize profits rather than volumes.

Not quite as profitable
That said, there is evidence to suggest that surging e-commerce demand, at least during higher peak demand periods, does not provide the kind of profit opportunities that many previously assumed.

I base this argument on comparing the sequential change (from the third to fourth quarter) in U.S. domestic package adjusted operating profit. Putting the last two years aside, it's clear that UPS isn't growing profits during peak as it used to. 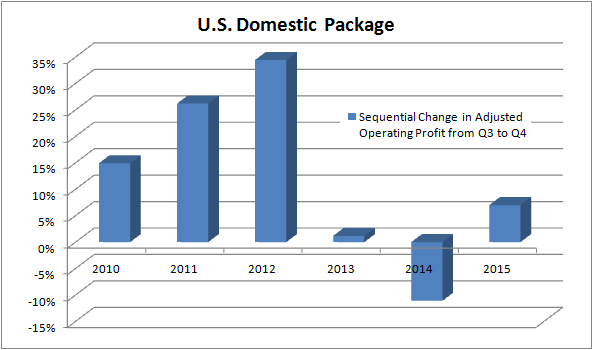 Investing conclusion: Surging e-commerce demand during peak brings challenges as well as opportunities and isn't a catchall argument for buying the stock. U.S. domestic adjusted operating profit in the fourth quarter of 2015 was just 2% higher than in the same period in 2011.

Guidance for 2016
The key numbers:

Investing conclusion: The U.S. domestic targets look reasonable considering the impact that the fall in oil prices had on fuel surcharges in 2015. However, the underlying EPS growth forecast of 7% to 11% growth is slightly below the long-term target of 9% to 13%.

The takeaway
All told, UPS' delivery during peak has helped derisk the stock, and underlying revenue improvements should start to shine through provided oil prices don't continue to fall sharply. Investors shouldn't worry too much about Amazon, because UPS isn't purely seeking e-commerce volume.

Moreover, the investment thesis on UPS isn't just about growing e-commerce revenue, it's also about the company's ability to deliver, and given the $5 billion in free cash flow in 2015 (representing 5.2% of its enterprise value), I would argue that the stock looks a little undervalued at $97.