Williams-Sonoma (NYSE:WSM) stock has fallen steadily since the company offered up a weak fourth-quarter outlook during its third-quarter 2015 earnings conference call way back in Nov. 2015.

What: The company has been unable to stop the negative momentum caused by those comments, which helped its stock decline from a Jan. 4 open of $57.77 to a Jan. 29 close of $51.66, a 10.57% loss, according to data provided by S&P Global Market Intelligence. That's a disturbing drop that at least suggests that the market does not believe the company had a solid holiday season. 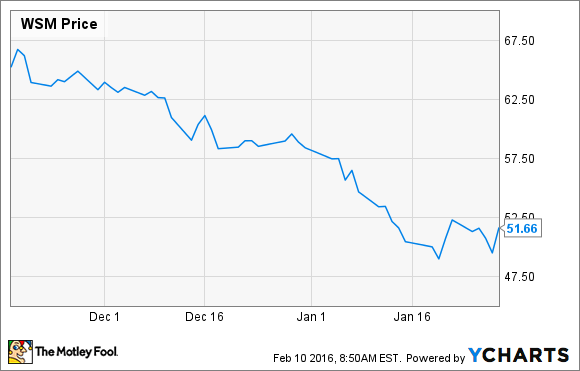 So what: Williams-Sonoma attributes some of its woes to fallout from problems with the West Coast ports that it uses for shipping. This has been an issue since Q4, according to Zacks.com, which said that "by third-quarter 2015, the company was able to recover its inventory levels to meet the ongoing holiday season," but that did not end its problems as "higher shipping and fulfillment related costs," continue to hurt margins.

The company also offered guidance suggesting that the disruptions would impact margins during the critical fourth quarter as well, causing "lost sales of $30-$40 million" and lower earnings per share by $0.10-$0.12 in fiscal 2015, Zacks reported.

Now what: The only way for the company to reverse its slide is to show that it has put its shipping problems behind that. Williams-Sonoma, which has not listed a day to report its Q4 and full-year earnings in the events section of its website, simply has to show investors that it can properly manage costs. (The retailer did not post the release date for its Q3 earnings until eight days before releasing them.)

It's not sales that have been the problem, which CEO Laura Alber detailed in the Q3 earnings release.

"We achieved total net revenue growth of 8%, EPS growth of 13%, and we are reiterating our full year guidance," she said while offering hope for Q4. "Looking ahead, while the retail landscape and consumer demand has been more volatile, we believe our balanced portfolio of differentiated brands and strong multi-channel platform positions us for ongoing market share gains."

So, unless Q4 comes in below expectations, it's not sales dragging the stock down but fears that the company cannot solve its West Coast shipping problems. If Williams-Sonoma reports that the Q4 impact of those problems was lower than expected, or at least contained, then perhaps its long decline will end.