Please ensure Javascript is enabled for purposes of website accessibility
Log In Help Join The Motley Fool
Free Article Join Over 1 Million Premium Members And Get More In-Depth Stock Guidance and Research
By Tyler Crowe - Feb 14, 2016 at 10:15AM

Despite posting a series of strong results throughout the downturn in the oil and gas market, Magellan Midstream Partners shares are still well below pre-crash days.

Across the entire energy space, investors have been looking for some safe haven that isn't at risk of some sort of dividend cut or some drastic declines from lower commodity prices. Funny thing is, though, Magellan Midstream Partners (MMP -2.46%) is one of those safe havens, but shares have been dragged down more than 25% over the past year.

If you look at the company's earnings over this time, though, it's hard to see why investors have been bearish at all. So let's take a quick peek at Magellan's recent results and perhaps how investors should think about this stock going forward if this is how the market plans to treat it.

Steady as she goes
If you're looking for a boring earnings report, then look no further than Magellan Midstream's quarterly results. Quarter in, quarter out, you can pretty much expect the same thing: a modest increase in cash flow as new projects offset any weird pricing discrepancies that flare up in the small segment of the company's non-fee based revenues. This quarter was pretty much the same. The company realized some paper writedowns of net income because of some mark-to-market pricing adjustments to its hedging positions, but some of those adjustments were offset by increases to its fee-based transportation and terminal services.

Overall, though, the operations of the company's business segments either held steady or saw some modest increases as new assets came into service. 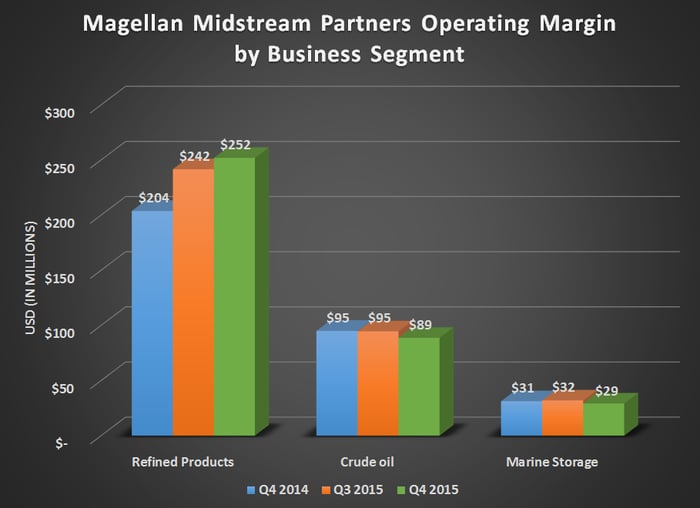 This modest increase in cash flow gave the company plenty of wiggle room to pay its distribution with room to spare. For the year, Magellan's distributable cash flow came in at $942 million for a distribution coverage ratio of 1.4 for the year.

Also, since the company's results seem so predictable, management has guided for 2016 with the expectation that distributable cash flow will be slightly down from this year -- about $900 million -- but that assumption was based on having crude oil stay around a rather conservative $35 per barrel for the year. For every $1 per barrel that increases throughout the year, the company can expect another $3 million in distributable cash.

The beauty in boring
No stock is what you would call a panacea for everyone's portfolio. Some investors are looking for more aggressive growth stocks, while others want the simplicity of a dividend-paying company that they don't have to think about much. Magellan definitely fits the latter description. The company grows modestly each year by bringing on new projects that complement its existing infrastructure network, and it does so without relying too heavily on external financing. For almost its entire existence, the company has been able to generate distribution growth over time, even during challenging times such as the financial crisis. 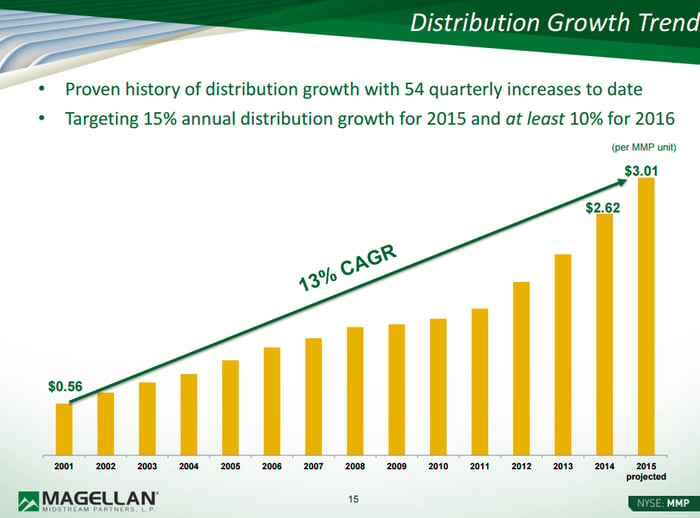 According to the company's most recent guidance, Magellan expects to grow the distribution by 10% in 2016 and probably 8% in 2017. The recent figures are a little lower than over the past few years because the company is bringing several of its major projects to a close, and management sees an oversupply of takeaway capacity in the major shale basins it has assets in. So growth from these parts of the business are expected to be modest over the next few years.

For investors that are looking for that stable income payment with some modest growth, Magellan is definitely a stock for you. If you have expectations beyond that, though, then Magellan probably won't deliver that.

What a Fool believes
Perhaps investors were expecting too much growth from Magellan during the boom days of the shale revolution, or perhaps shares have been dragged down by the rest of the industry. Either way, Magellan continues to post solid results that show no signs of a weak oil price environment that don't really line up with how the stock has performed over the past year. If investors can't seem to realize the resiliency of Magellan's business model, then chances are shares are going to remain low throughout the commodity downcycle. For those who are wise to Magellan's strengths and wants that modest growing dividend stock in their portfolio, they are probably happy to see shares of Magellan trading at a distribution yield of 5.3%.