There's no news driving the stock higher, but the stock may simply be bouncing off the bottom of a 50% decline.

What: Shares of home furnishings retailer Restoration Hardware (RH 3.98%) surged on Tuesday despite no positive news. The stock has tumbled about 50% since the beginning of November, so the rise on Tuesday may be a sign that it's bottoming out. At 3:15 p.m. ET Tuesday, it was up about 10%. 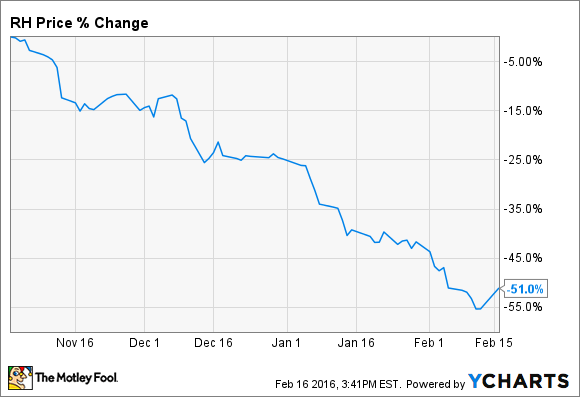 So what: It's difficult to pinpoint exactly why shares of Restoration Hardware have fallen so much over the past few months. The market sell-off that has occurred this year explains some of it, but the stock began falling back in November. Revenue growth has been slowing down -- the company posted 9.8% year-over-year growth during the fiscal third quarter, down from 16.9% during the second quarter. This slowdown, combined with macroeconomic uncertainty and Restoration Hardware's lofty valuation, are the best explanations for the stock's poor performance.

At its 52-week high, Restoration Hardware traded at 2.2 times trailing-12-month sales and 45 times GAAP earnings, a high price to pay for a company with slowing growth. The valuation may have simply gotten ahead of the stock, starting a decline that was then fueled by a tumbling stock market.

The gain on Tuesday has no news behind it, so it may simply be the case that the heavy selling is coming to an end. Plenty of stocks have been extremely volatile so far this year, rising by double digits on good days and dropping by double digits on bad days, and Restoration Hardware seems to be one of them.

Now what: The performance of the stock says nothing about the company's, and while revenue growth slowed during the third quarter, all signs point to continued growth going forward. Restoration Hardware guided for revenue of $708 million to $718 million for the fourth quarter, representing year-over-year growth of 22% at the midpoint of that range. If it hits its guidance, investors' concerns about a slowdown in growth should be allayed.