Find out just how poorly Plains All American did in 2015 and why 2016 isn't likely to be much better.

Plains All American Pipeline (PAA 3.44%) and its general partner, Plains GP Holdings (PAGP 2.80%), have been among the most devastated energy stocks of the last year. 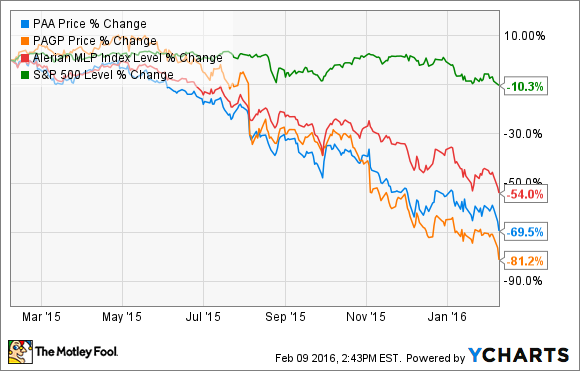 However, unlike many quality midstream MLPs, which have been beaten down unfairly in Wall Street's mad dash out of anything related to oil and gas, Plains All American Pipeline and Plains GP sky-high yield's of around 20% are well deserved because of their dubious sustainability.

Let's take a closer look at Plains All American's latest earnings and full year results to see just why long-term income investors should stay far away from this troubled pipeline giant, even at these rock-bottom prices.

Note that Plains GP Holdings' cash flow and dividend are derived purely from its ownership of its MLP's limited units and incentive distribution rights. Therefore, the safety of its own payout is solely based on Plains All American Pipelines' results.

Because of continued weakness in the natural gas liquids market, Plains All American missed its own guidance this quarter, returning a coverage ratio of 0.88 instead of the previously guided for but still unsustainable 0.94.

Management remains optimistic, however, that it will be able to sustain its current payout. This is due to $1.5 billion in capital projects scheduled to come online over the next two years, which will be funded mostly by the proceeds of its recent $1.6 billion preferred equity issuance.

Payout profile remains abysmal
For the full year, Plains All American Pipeline's misguided dedication to growing its payout in the face of falling cash flow and rising unit count resulted in a dangerous decline in its coverage ratio, which remains far below the minimum sustainable level of 1.0.

In addition, its recent announcement that it will cut its 2016's capital budget by as much as 30% and potentially have to sell assets in 2016 indicates that Plains All American is undergoing financial stress that contradicts management's sugar-coated optimism.

Limited growth runway, and limited access to profitable growth
Plains All American's only hope of maintaining its current distribution is to grow its cash flow.

Despite the recent issuance of $1.6 billion worth of 8% preferred perpetual convertible units,which management believes will provide sufficient capital until sometime in 2017, I believe that the MLP's ability to profitably grow could be greatly constrained should energy prices remain low for several years.

Plains All American's total debt of $11.1 billion means that its balance sheet is highly leveraged, which likely means that future debt costs will rise. In addition, management's target debt-to-adjusted EBITDA target of 3.5-4.0 means that it will have to rely on more equity capital raises to grow in the future, at least until its leverage ratio declines to the target range.

The problem is that, as its latest preferred equity issuance shows, Wall Street isn't willing to give Plains All American access to equity growth capital except for cheap. Meanwhile, the energy crash has resulted in a decline in the MLP's return on invested capital. For example, in Q3 it was just 6.66%.

With its costs of capital rising, Plains All American potentially faces the prospect of being forced to fund lower return projects in hopes of covering its distribution, or cut it to better match the realities of today's energy markets.

Plains All American's sky-high yield of almost 20% shows that wall Street thinks a payout cut is the more likely outcome. With the MLP facing the prospect of low energy prices continuing into 2017, I don't have much hope in the long-term sustainability of the current distribution to survive the current oil crash.

Nothing less than a sharp and sustained energy price recovery in 2016 is likely to allow Plains All American Pipeline to preserve its current payout. That is a highly speculative bet, one that only the most high-risk investors should consider making.