Please ensure Javascript is enabled for purposes of website accessibility
Log In Help Join The Motley Fool
Free Article Join Over 1 Million Premium Members And Get More In-Depth Stock Guidance and Research
By Jeremy Bowman - Feb 20, 2016 at 8:04AM

The travel reviewer has a lot going for it. Here are a few reasons why the stock could be headed north.

Since it was spun off from Expedia Inc (EXPE 3.69%) in late 2011, TripAdvisor Inc (TRIP 4.17%) has been a surprising winner on the market. The stock has returned 129% since its debut, more than double the gains of the S&P 500 and besting its former parent as well.

TripAdvisor has avoided the pitfalls of other review-based websites like Yelp by building a business around its reviews and tapping into the lucrative travel industry through advertising and business partnerships. Growth in those areas has led revenue to more than double in the four years since its spinoff, and with a P/E ratio above 30 investors are expecting the company to continue to grow. Here are three reasons why TripAdvisor stock could keep rising.

1. The instant booking platform could take off
Diversifying away from advertising, TripAdvisor launched its instant booking platform last year, which allows visitors to the website to make hotel bookings just as they would with rivals Expedia and Priceline Group (BKNG 1.68%). The new feature gives the company a potentially large revenue stream, as online bookings bring in billions of dollars a year for its rivals.

The program got a big shot in the arm when Priceline agreed to a strategic partnership with TripAdvisor last October. Priceline said sites like Booking.com, the world's biggest hotel reservation site, would make listings available on the travel-review site -- Booking.com plans to list 436,000 hotels on TripAdvisor.

The move should be a big win for TripAdvisor, boosting the appeal of visiting the site and bringing in additional revenue. In its most recent quarter, TripAdvisor rolled out instant booking globally. The company has warned the expansion would be a near-term drain on profits; over the long-term, however, it should be a significant contributor to the bottom line.

2. TripAdvisor could be an acquisition target
At a market of value of nearly $10 billion, TripAdvisor would be a pricey buyout -- but an acquisition, or at least a strategic partnership involving a significant investment, is foreseeable. The company is by far the leader in travel reviews, making it a complementary business for a company like Priceline or even search-advertising kingpin Google, which has made steps into the travel market.

Google now offers booking for flights and hotels, and if the company wanted to dive into the travel industry, a partnership with TripAdvisor would make sense. Google has made travel-related acquisitions in the past, taking over Frommer's, which it then sold back, and restaurant review site Zagat.

Following its recent partnership with TripAdvisor, it's also possible that Priceline could take a stake in the review site, as bringing TripAdvisor into its fold would add value to the booking service. Priceline has grown over the years, taking over several travel-booking related websites. 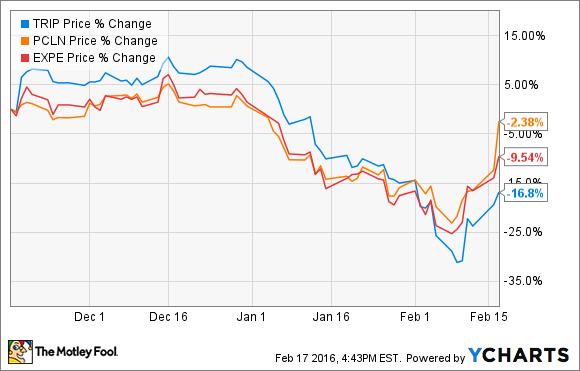 All three have recovered in the past week as they posted better-than-expected earnings reports, but earlier in the month they were down about 25% over three months. It seems like concerns about a slowdown in the travel industry have been overblown. In fact, there are a number of catalysts that could lead to industrywide growth.

Low oil prices have made airfares unusually low, and given consumers additional discretionary income that they may choose to spend on their next vacation. A strong dollar also incentivizes Americans to take trips abroad.

On a global scale, millions of Chinese are moving into the middle class despite the current economic headwinds, and TripAdvisor believes China will be its biggest market in a few years, providing a steady source of growth.

Suzanne Frey, an executive at Alphabet, is a member of The Motley Fool's board of directors. Jeremy Bowman has no position in any stocks mentioned. The Motley Fool owns shares of and recommends Alphabet (A shares), Alphabet (C shares), Priceline Group, and TripAdvisor. Try any of our Foolish newsletter services free for 30 days. We Fools may not all hold the same opinions, but we all believe that considering a diverse range of insights makes us better investors. The Motley Fool has a disclosure policy.