Please ensure Javascript is enabled for purposes of website accessibility
Log In Help Join The Motley Fool
Free Article Join Over 1 Million Premium Members And Get More In-Depth Stock Guidance and Research
By Adam Galas - Feb 21, 2016 at 11:45AM

Kinder Morgan seems to finally be on the right track to grow despite low oil prices. Yet there are three far superior MLPs that are investors should consider buying today.

With shares having fallen far worse than many of its blue chip midstream MLP peers such as Enterprise Products Partners (NYSE: EPD), Magellan Midstream Partners (NYSE: MMP), and Spectra Energy Partners (NYSE: SEP), value-hungry income investors may be considering opening or adding to their positions in America's fallen dividend darling. I think that's a bad idea, and Enterprise Products, Magellan Midstream, and Spectra Energy Partners are all likely to make far superior long-term income investments over the next five to 10 years. Here's why. 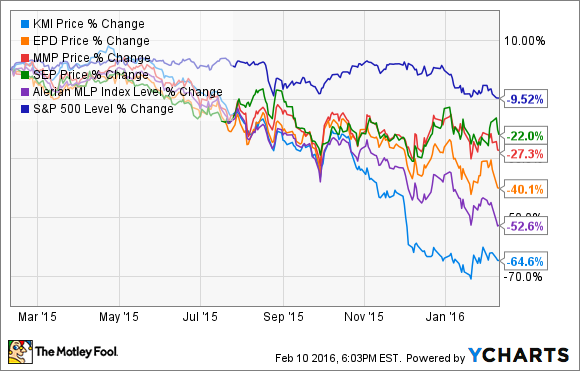 A rare case of higher quality and higher yield

Note that Kinder's 2015 coverage ratio takes into account the reduced dividend and Magellan's factors in 10% distribution growth that management is currently guiding for.

The point of owning midstream MLPs is for the distributions, and investors need to focus on three aspects of the payout: yield, long-term sustainability, and long-term, realistic growth prospects.

In this case, Kinder Morgan proves itself far inferior in all aspects to its peers, with a far lower yield and uncertain payout growth prospects. Even its enormous coverage ratio, while technically representing $3.6 billion in excess DCF, once the 2016 dividend is factored in, isn't that impressive. This is because, unlike Enterprise, Magellan, and Spectra Energy Partners, Kinder has no way to fund its capital spending nor pay down its enormous debt except with excess DCF, meaning its financial flexibility to do things such as raise the dividend in the short-term is far more limited than its peers.

Also keep in mind that this projected excess DCF is based on predicted average 2016 oil and gas prices that are already proving overly optimistic. Should energy prices continue falling or even just remain at current prices, Kinder's excess DCF cushion will fall right along with them.

Superior payout growth guidance backed up by strong backlogs
When it comes to long-term distribution growth, it's vital that investors not just take management's word for it but ask themselves, "Does this MLP have a large enough short-term to medium-term project backlog to sustainably grow the payout this quickly?"

Enterprise Products Partners, and Spectra Energy Partners both have stable or growing backlogs that are sufficient to provide a growth catalyst that is likely to keep their payouts growing for many years to come. As for Magellan, while true that its backlog has gradually been shrinking in recent years,but the investments it does have coming online over the next few years are profitable enough that it should have no problem still growing its DCF despite low energy costs.

Kinder Morgan, on the other hand, has been forced to slash its once mighty $22 billion backlog by 17% or $3.8 billion in just the past six months.

Management has said that it expects the backlog to continue shrinking as it focuses on only its most potentially profitable projects. Don't get me wrong -- this "high-grading" of Kinder's backlog is necessary because when it comes to profitability Kinder is once again woefully inferior compared to its blue chip peers.

Kinder Morgan's highly leveraged balance sheet, and the risk of a credit downgrade, was the primary cause of its dividend cut and share price crash.

This high debt load means that servicing its debt is more difficult and expensive. Also, it runs the risk that refinancing its existing debt will only grow in the future. This would further increase its cost of capital, which could further harm its ability to grow profitably.

In comparison, Enterprise, Magellan, and Spectra Energy Partners' leverage and interest coverage ratios exhibit clear signs of far more conservative use of debt in the past. This helps to keep their cost of capital low and allows positive return on new investment that is likely to mean continued cash flow and payout growth for the foreseeable future.

Bottom line
Kinder Morgan may finally be on the right track when it comes to growing in a world of low energy prices, and by no means should investors that already own Kinder Morgan go looking elsewhere for their dividend checks.