Please ensure Javascript is enabled for purposes of website accessibility
Log In Help Join The Motley Fool
Free Article Join Over 1 Million Premium Members And Get More In-Depth Stock Guidance and Research
By Morgan Housel – Feb 22, 2016 at 10:34AM

Same as it ever was.

A Motley Fool member asked a great question during a Q&A session at a gathering in San Diego last week:

"With the bigger presence of media talking about the markets and the hyperactivity of trading by computers, do you see this higher volatility as a more permanent reality for the markets?"

I like this question because the amount of media attention and computer trading is unquestionably higher today than the past. It worries a lot of people.

But the premise of the question — whether there is more volatility today compared to the past — is a separate issue. And the answer might surprise you.

In response to the question I said that I suspected, without looking at the data, that ...

But that was a guess. So I crunched the numbers this week and ... it's just about right.

That's important because as investors look around and think, "Wow, today's market is so much crazier than it's been in the past," digging through the data might offer a different perspective. In many ways what we're going through now is the same as it's ever been and ever was.

I looked at the standard deviation of market returns over the last century for every daily, weekly, monthly, and annual period. It shows how volatility has changed over time. 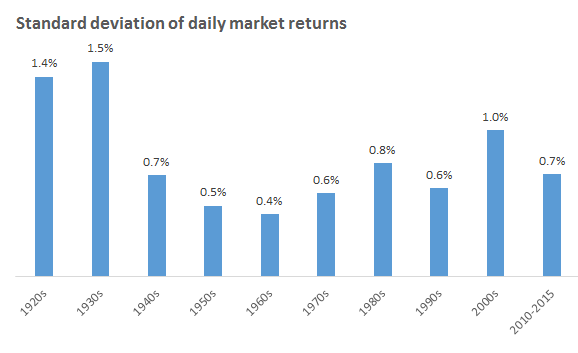 Compared to the 1950s and '60s, the 2000s were pretty wild day to day. That isn't surprising. Two bubbles burst, and high-frequency traders came into business and began rapidly trading faster than humans ever could. Daily volatility in recent years was nowhere near what it was during the Great Depression. And over the last five years it's actually lower than it was in the 1980s. But today's daily market is a wild place compared to the three decades after World War II. No getting around that.

But look what happens when we look at weekly volatility: 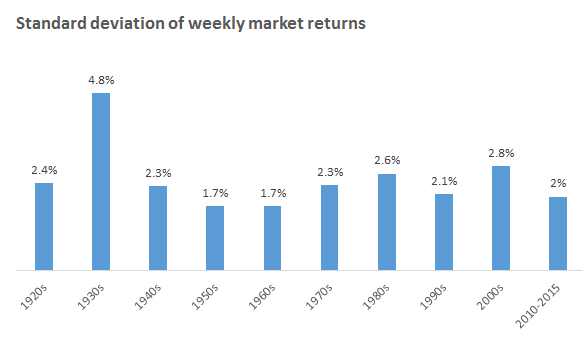 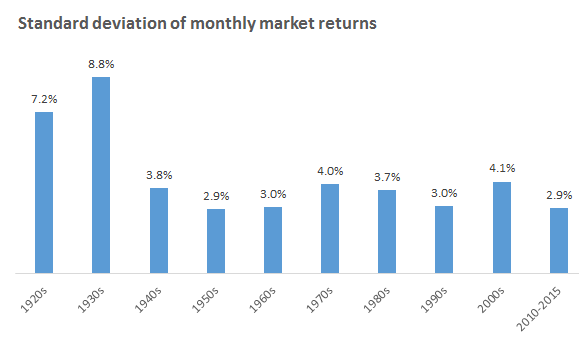 Here again, recent years aren't far from average, and are way below the 1920s and 1930s. The last five years have been more tranquil than any period since the 1950s. 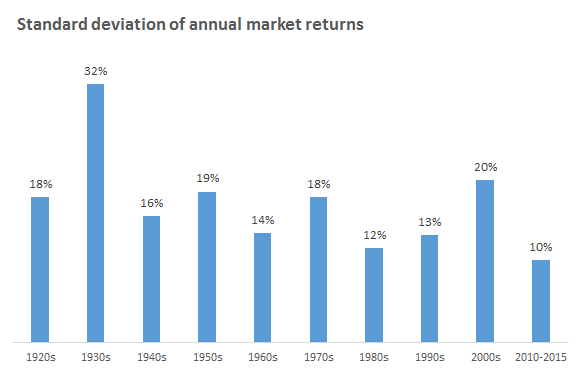 The wild 2000s had about the same volatility as the 1950s and 1970s. The last five years has actually been one of the least-volatile periods in history.

The sum up: Only in the false tale told by nostalgia is there such a thing as a calm stock market. It's never existed. And it never will exist.

I think part of the reason we believe the market was more tranquil in the past is because we know how past returns ended up. We know stocks did well in the 1950s and 1960s, so we assume it must have been a calm, orderly time for investors. But it wasn't. There was a period in 1955 when the market fell 5% one month, rose 7% the next, fell 3% after that and then rose 5%. If this kind of madness happened today we'd blame high-frequency traders and take it as a sign that today's market is too risky to take seriously. But since we know in hindsight that stocks did well in the 1950s, volatility is easy to overlook.

The good news is that where today's market really is more volatile — hour to hour, day to day — is the kind of period long-term investors shouldn't pay much attention to anyways. For the periods we care about — year to year, decade to decade — it's same as it ever was.