Pfizer's biosimilar of Johnson & Johnson's Remicade impressed an FDA advisory committee, but that's probably not as bad news for J&J as you think.

Recently, an independent advisory committee sent the FDA into uncharted waters. By voting 21-to-3 in favor of approving Inflectra, development partners Celltrion and Pfizer (PFE 3.77%) took a giant step toward FDA approval. The drug is a biosimilar of Johnson & Johnson (JNJ -1.10%)'s blockbuster anti-inflammatory drug Remicade, which has had some Johnson & Johnson investors shaking in their boots.

The FDA isn't required to follow the advice of these independent committees, but it usually does. If approved, Inflectra would the first biosimilar antibody in the U.S. given the green light. The title for first FDA-approved biosimilar ever belongs to Novartis' Zarxio, a copycat version of Amgen's Neupogen approved nearly a year ago. Compared with that little protein, Inflectra is much more complicated. So you can imagine Johnson & Johnson's surprise when the advisory committee voted in favor of approving Inflectra for all of Remicade's indications, instead of just the ones that the agency had head-to-head equivalence data for.

Pfizer and its South Korean partner expect an approval decision by April 6. There's also a rule that states a biosimilar must wait six months following approval before its commercial launch. All told, this means a less expensive, slightly different, but therapeutically equivalent version of Remicade could be on pharmacy shelves by the end of the year.

Before you go dumping shares of J&J, consider these three reasons Inflectra doesn't have Johnson & Johnson execs trembling in fear.

1. Limited price differential
When small molecule drugs go off patent, it's not uncommon for generic competition to devastate their sales over several quarters. One reason is that it's comparatively easy to make identical copies and earn marketing approval for small-molecule drugs. Given the low cost of entry, lots of competitors quickly race each other to the bottom. 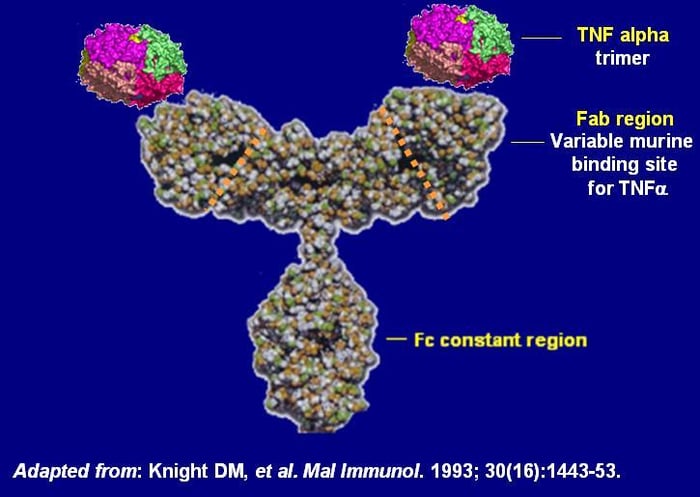 In stark contrast to small molecule drugs, a biologic drug such as Remicade consists of hundreds of amino acids. In a lab you could assemble them in the exact same sequence, but they won't fold the way you need them to. Instead, they're "manufactured" in a cloned cell culture. The patent for Remicade may have expired, but Johnson & Johnson isn't required to share its cell line. Use a different line of cells, and the antibody comes out slightly different, hence the term
biosimilar.

Proving your biosimilar is therapeutically equivalent is a very expensive process, which limits the number of competitors. In turn, a limited number of competitors keeps prices relatively high. The first biosimilar was approved in 2006 in the E.U., and prices there have averaged about 30% less than their reference products. (For comparison, small molecule generics are sold for 80-85% lower than their equivalent brand name drugs, on average.)

The European Medicines Agency first approved biosimilars of Remicade in 2013. Johnson & Johnson doesn't break down all the origins of its ex-U.S. sales, but general international Remicade sales fell just 4.7% to $1.3 billion last year, excluding the negative effects of a rising dollar. All told, it would appear that the entry of a biosimilar competitor to a biologic drug isn't nearly the death sentence that generics are to small molecule drugs.

2. Diversity to the rescue
Last year U.S. sales of Remicade rose 7.2% to $4.45 billion. For most companies any competitive threat to a product that big would keep the corner-office lights burning night after nervous night.

Even Remicade's immediate demise would only sting, not devastate, the giant. If Remicade's losses to biosimilar competition in the U.S. occur on the scale we've seen internationally, they'll seem more like a hiccup than a sting.

3. What's this on the telly?
In fact, I'll stick my neck out and suggest U.S. Remicade losses to Inflectra will be even slower than those experienced abroad. With the exception of New Zealand, the U.S. is the only developed nation that allows direct-to-consumer advertising of prescription drugs.

It's hard to imagine what TV would be like without these ads. It's even harder to imagine that Johnson & Johnson wouldn't take advantage of the fact that Inflectra is not entirely identical to Remicade. About $1.2 billion of Remicade's 2014 U.S. sales came from 59,748 Medicare beneficiaries. Most of them wouldn't know a monoclonal antibody from a hole in the ground, but they watch lots of television.

Not all patients respond well to anti-TNFs such as Remicade, but the drug is generally popular. Doctors who have built up familiarity with the drug, compounded by patients who aren't thrilled about injections of something "different," don't bode well for Inflectra, if it's approved. I'm not suggesting Remicade sales will continue expanding in the U.S., but the potential losses aren't keeping me up at night.