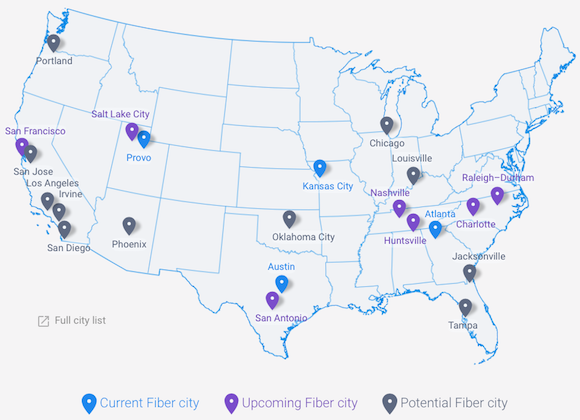 What happened?
Alphabet (GOOG 2.36%) (GOOGL 2.39%) has now announced its next Fiber city: San Francisco. The company says that it will bring its gigabit Internet service to select apartments and condos in the city, and it is already working with property owners and managers to connect the necessary infrastructure.

Does it matter?
While Google Fiber is unlikely to ever represent a meaningful portion of Google's business, Fiber still delivers incredible value to consumers in the markets where it is available. Google says it is now broadening its horizons with the types of cities that it considers for Fiber, as well as different distribution methods. San Francisco is easily the most urbanized Fiber city, and Google will be using existing fiber networks instead of building its own.

Strategically, Fiber represents an important push to make Internet speeds in the U.S. faster and more affordable at a time when the U.S. lags other developed countries on both of those fronts. Google has also catalyzed incumbent Internet service providers into action in those markets, compelling rivals to offer better speeds and lower prices.

Suzanne Frey, an executive at Alphabet, is a member of The Motley Fool's board of directors. Evan Niu, CFA has no position in any stocks mentioned. The Motley Fool owns shares of and recommends Alphabet (A shares) and Alphabet (C shares). Try any of our Foolish newsletter services free for 30 days. We Fools may not all hold the same opinions, but we all believe that considering a diverse range of insights makes us better investors. The Motley Fool has a disclosure policy.