After a strong-fourth quarter and 2016 guidance that forecasted 21% growth on the top line, investors are buying up shares of Zoe's Kitchen.

What: Shares of Zoe's Kitchen (ZOES), a fast-casual restaurant serving Mediterranean-inspired dishes at 165 locations, are soaring more than 15% Friday morning after the company announced a strong fourth quarter on Thursday.

So what: Zoe's total revenue jumped by 31.7% to $52.7 million during the fourth quarter with comparable-restaurant sales showing a healthy 7.7% increase. That result was ahead of analysts surveyed by Zacks, which expected revenue of $50.5 million.

Now what: After a strong fourth quarter, Zoe's management expects total revenue for 2016 to check in between $275 million to $280 million, which would be roughly 21% higher than 2015's full-year revenue. It's expecting comparable-store sales growth to be between 4% and 5.5%, which is slower than 2015's growth but still healthy. Expect the company's top line to continue to grow rapidly, with 34 to 36 company-owned restaurants opening during 2016. 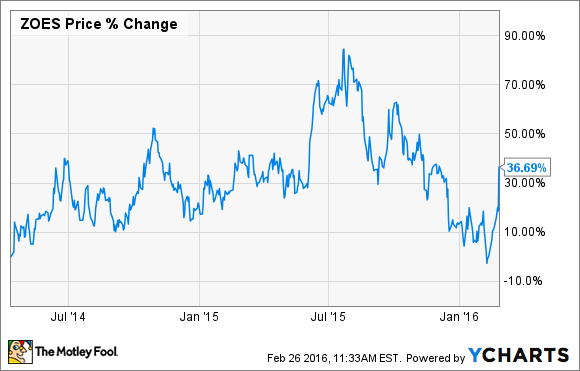 This stock has been volatile since its IPO, but it was a great fourth quarter and Zoe's appears well poised to keep growing.

Daniel Miller has no position in any stocks mentioned. The Motley Fool owns shares of and recommends Zoe's Kitchen. Try any of our Foolish newsletter services free for 30 days. We Fools may not all hold the same opinions, but we all believe that considering a diverse range of insights makes us better investors. The Motley Fool has a disclosure policy.