A little sign of promise can be just enough to send Whiting's shares soaring -- and the market got just that today.

What: Shares of Whiting Petroleum (WLL) are up just under 10% at market close today, as oil prices are on the rise and Mr. Market responds favorably to the company's decision to slash its capital budget to the absolute bare bones in order to live within its cash flow for 2016.

So what: Considering how much shares of Whiting Petroleum are down over the past year, it doesn't take much to move the company's stock by double digits. So nowadays, don't take every 10% move by Whiting's stock as a big deal. 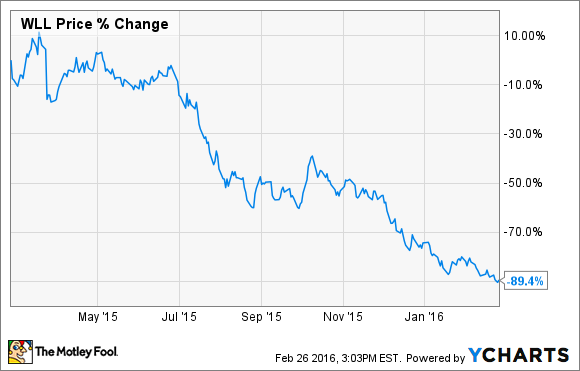 What's driving today's share price rally -- if you want to call it that -- is that oil prices have climbed a bit recently to a point that is giving some investors more confidence to jump back in. Today, Brent crude oil is trading above $35 per barrel. Not a huge amount, but a major improvement over the close-to-$25 oil a month ago.

What is also helping to fuel this rally is that Whiting has plans to batten down the hatches for 2016. The company plans to cut its capital budget by 80% to just $500 million, most of which will be used just to drill wells and leave them uncompleted. In doing so, it can preserve cash in the year and have a quiver of wells ready to go once oil prices recover.

Now what: It's good to know that Whiting's management is taking drastic steps to keep the lights on, but the company still has a large debt load and has not yet proven that it can live within its cash flows. An investment in this company is still akin to a bet on oil prices. Until we start to see an improving balance sheet and some strong operational results, it's probably best to sit on the sidelines for this one.