While its fellow peers are struggling to stay solvent, these two oil companies are already thriving, which means higher oil prices should make them big winners.

With the traditional growth engines of the global economy -- the so-called emerging markets -- forecast to slow down in 2016, global energy demand growth remains challenged. To rub salt in the wound, OPEC is flooding the world with cheap oil, resulting in low oil prices unmatched in 13 years.

Within the energy sector, the biggest loser is the oil and gas industry, where an overwhelming majority of companies are struggling with low cash reserves, high debt, and prospects of diminished spending in 2016. However, it's within this industry that some real gems exist that could potentially outperform the market this year. With oil prices averaging in the $30s since the start of the year, the market is discounting these companies. But that may not last if they're recognized as standout performers over the next 12 months.

Here, then, are two of the best energy stocks that have the potential to deliver handsome returns in 2016.

PDC Energy
Based in Denver, PDC Energy (NYSE: PDCE) is an oil exploration and production company that holds its core acreage position in the Wattenberg field in Colorado. The company also operates in the Utica shale play in Ohio. What makes PDC Energy a winner is its strong balance sheet -- a rarity among oil-producing companies in the current low-price environment. Its debt-to-equity ratio stands at just 52%, which is quite an enviable figure within the industry.

Declining well costs are the primary reason for this achievement. A completed well with a standard 4,200-foot-long lateral is typically drilled in just seven days for a rock-bottom cost of $2.9 million. An extended-reach well (with a lateral length of 6,900 feet) should cost $3.9 million. The latter is, of course, expected to have a much higher initial production rate. However, the most important aspect that should drive this year's performance, and that probably isn't given due importance, is the company's extremely well-hedged production portfolio. Around 4.1 million barrels of crude oil and 29.8 Bcf of natural gas sales are hedged at a weighted average price of $84.99 per barrel and $3.67 per Mcf, respectively. That means a total of 9.1 MMBoe -- or a solid 41% of total expected production for 2016 -- is hedged at prices that are more than double that of existing spot rates for these commodities. 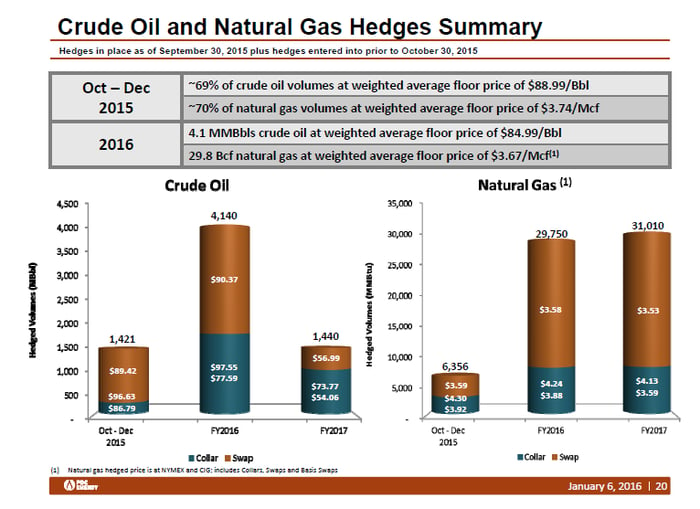 Diamondback Energy
Headquartered in arguably the best-known oil patch in the United States -- in Midland, Texas -- Diamondback Energy (NASDAQ: FANG) operates in the heart of the Permian Basin. It focuses primarily on the Wolfberry trend, a name that collectively stands for the Spraberry, Wolfcamp, Cline and Clearfork shale formations.

Diamondback's standout feature is, again, a solid balance sheet. Its debt-to-equity ratio stands a measly 21%. With its senior debt of $450 million due in 2021, the oil producer is unlikely to run into liquidity or operating issues in the current downturn. Bloomberg recently ran an article on how Diamondback CEO Travis Stice managed to stick to his guns and not fall for the cheap debt bankers were offering. That speaks well of management for never biting the proverbial bullet when cheap credit was easily available during the glory days of oil drilling. Available liquidity, too, stands at an impressive $529 million at the end of the third quarter of 2015. But what makes the company tick even in such a low-oil-price environment?

The answer is pretty simple: a robust drilling inventory in the sweetest spots of the Permian Basin. Diamondback Energy has about 700 gross locations available for drilling that are profitable at WTI prices between $35 and $45 per barrel. Management estimates that with a two- or three-rig effort, that's a solid 14-year inventory. In other words, the company is capable of withstanding really low oil prices for that long.

In addition, company has access to best-in-class execution techniques and methods that lower its cost structure significantly. The following chart explains it all: 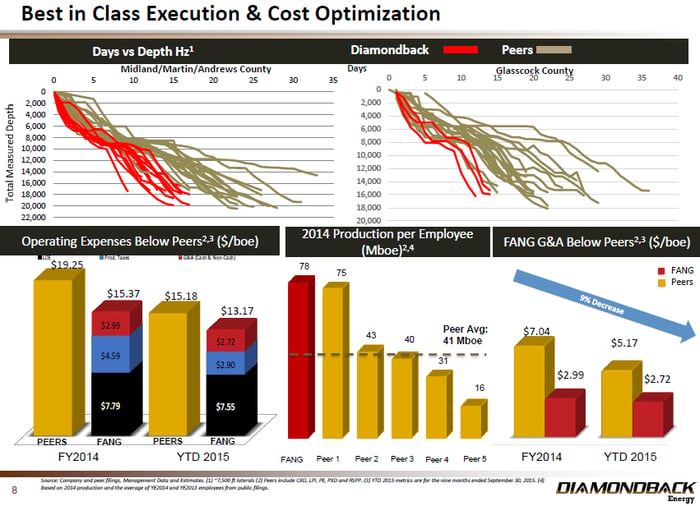 We notice how the company has consistently lower drilling days per well, compared with peers operating in the same regions. Also, operating expenses and general and administrative expenses have been significantly lower than those of its peers.

Foolish bottom line
Should oil prices move north, both PDC Energy and Diamondback Energy stand to gain immensely. Both companies are already thriving when most of its peers are struggling to stay above water. The unhedged part of their production portfolios should bring huge profitability without the worries of repaying debt. Investors should definitely keep an eye on these two stocks.