LyondellBasell has felt the heat of falling oil prices, but an oil rebound is just one reason why the stock could rise

LyondellBasell (NYSE: LYB) is leveraged to low natural gas prices, meaning that falling oil prices have crimped its competitive cost advantage. So a rebound in oil would boost the company's profitability versus competitors, something investors are likely to notice. But it's not the only reason LyondellBasell stock could rise -- just the easiest to see. Here's why oil is so important and two other things you should be keeping an eye on at this chemical company.

The odd impact of oil
Oil is a key ingredient for chemical companies. However, much of LyondellBasell's business is based in the United States. So it uses a lot of natural gas, which has been cheap for several years because of a supply glut. Up until mid-2014, that was a huge cost advantage for the company, since many of its peers used more expensive oil. That, in turn, allowed the chemical maker to earn wide profits relative to oil dependent peers. But when the oil market started to crater, that advantage began to shrink.

Here's the thing. According to LyondellBasell, based on the historical spread between oil and natural gas, it would expect oil to be trading in the $20- to $25-per-barrel range based on the current price of natural gas. If oil falls to that point, it would be bad for the chemical maker because it would likely lead investors to question the value of its natural gas focus. However, if oil stays comfortably above that point or even rallies, then investors are likely to reward LyondellBasell for not being overly reliant on more-expensive oil as a key feedstock.

Building the business
So oil could help or hurt the company, but it's clearly one of the most obvious factors for investors to watch because an oil rally could lead to a rally in LyondellBasell's shares. However, it's not the only issue to keep an eye on. For example, LyondellBasell is building new facilities to expand its production. Assuming that goes well, the company will have the opportunity to increase sales and profits.

Case in point, LyondellBasell is undertaking its largest project ever in Texas where it's building a propylene oxide and tertiary butyl alcohol plant. Not only is this a giant project for the company, but it will also be one of the largest plants of its kind in the world. But that's just one plant. Over the next three to five years, the company plans to spend as much as $5 billion on new facilities and expansions on the Gulf Coast. If everything goes well, look for LyondellBasell's top line to benefit.

That, however, is just one growth lever. LyondellBasell is also using acquisitions to expand. A good example here is the recent purchase of an Indian company that targets the automobile industry. This transaction will materially increase the company's presence in that industry in India. And that's a good thing, because India is moving up the socioeconomic ladder, which suggests increased car ownership and, thus, strong demand at the business LyondellBasell is buying. So you'll want to watch what the company does on the acquisition front, too, since it could be a key determinant of its long-term success and the valuation investors place on its shares. 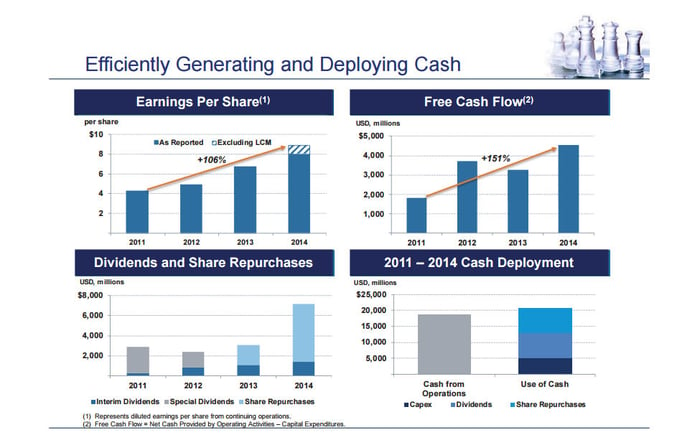 How the company is making cash and using it. Source: LyondellBasell.

Earnings and shares
The last issue that could boost the stock price is sometimes a controversial one: stock buybacks. LyondellBasell rewarded shareholders with special dividends in 2011 and 2012, but then it shifted gears and started to buy back stock. This reduces the number of shares over which profits get spread and, thus, increases per share earnings. And we aren't talking small moves: The company's share count has fallen by nearly 20% since since the start of 2013.

Some might argue that this isn't the same as growing the business. For example, International Business Machines' (IBM -0.60%) top line has been falling for years as it sells older businesses and invests in newer ones that have yet to pick up the slack, but huge stock buybacks have helped to support earnings. The shares, however, are well off their highs because of the top line declines. But that's exactly when you want a company to be buying back stock.

So with LyondellBasell off some 30% from its recent highs, now seems like a good time to be buying back shares. And with significant and expanding free cash flow, it has the cash to do it. Opinions on stock buybacks aside, this is another reason why LyondellBasell's stock could rise, since stock buybacks will help boost the perhaps over zealously followed earnings numbers.

Risks and rewards
LyondellBasell is facing a difficult chemicals market, but it's making moves to position itself for today and the future. While it can't do much about oil prices, they will have an outsize impact on its relative performance and how investors view the shares. If oil starts to rally and natural gas stays cheap, the chemical maker's shares will likely follow oil higher. But there's more going on, including construction and acquisitions to actually build the business and robust stock buybacks that help to boost the bottom line. Each of these could lead to higher stock prices, too.

Reuben Brewer owns shares of International Business Machines. The Motley Fool has no position in any of the stocks mentioned. We Fools may not all hold the same opinions, but we all believe that considering a diverse range of insights makes us better investors. The Motley Fool has a disclosure policy.