What: Shares of car and equipment rental company Hertz Global (HTZG.Q) surged on Tuesday after the company reported its fourth-quarter results. While the numbers were mixed, with Hertz missing revenue estimates while beating earnings forecasts, a beaten-down stock price and decent guidance were enough to propel shares higher. At 11:30 a.m. ET Tuesday, the stock was up about 12%.

Despite missing on revenue, Hertz reported non-GAAP EPS of $0.05, up from a loss of $0.22 during the prior-year period, and a penny higher than analysts were expecting. As part of its turnaround effort, it is working to reduce costs, with a goal of $350 million in cost savings in 2016, adding to $230 million in cuts the company achieved in 2015. 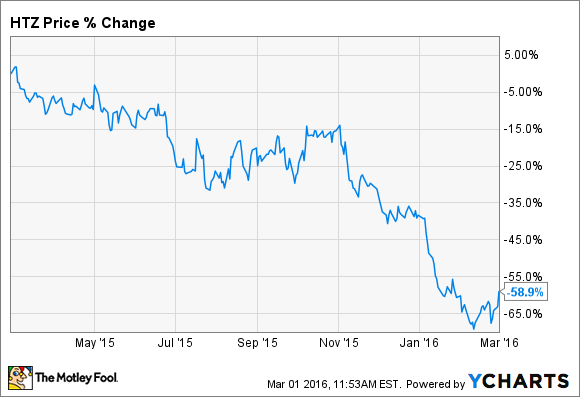 While Hertz's results were mixed, the stock has been wrecked over the past year, falling by nearly 60%. A depressed stock price and low expectations seem to be fueling Hertz's post-earnings rise. With its accounting issues in the rearview mirror, Hertz can now focus on spinning off its equipment rental business and making its car rental business more efficient, and signs of progress on those fronts were evident in the fourth-quarter report. Investors will be looking for further progress in the coming quarters.