Please ensure Javascript is enabled for purposes of website accessibility
Log In Help Join The Motley Fool
Free Article Join Over 1 Million Premium Members And Get More In-Depth Stock Guidance and Research
By Reuben Gregg Brewer - Mar 2, 2016 at 9:45AM

Exelon has felt the pinch of changing power markets, but a few not so subtle industry shifts could turn the company's fortunes around.

Exelon Corporation (NYSE: EXC) is a large U.S. utility with heavy exposure to the northeast. But it stands out among its peers because of the power plants it runs. And that's exactly why there are three reasons Exelon stock could rise.

Nuclear freeze
Exelon generates about 60% of its electricity from nuclear power plants. After the Fukushima disaster in Japan, that's been something of an image liability. But there's a lot to like about nuclear power.

But, today, the hot power options are solar and wind, not nuclear. With so much of its power coming from nuclear, however, a changed view of the fuel's desirability would probably lead investors to rethink their view of Exelon stock. That change could be led by government or regulatory shifts, or a realization that nuclear, despite some high-profile disasters, is a relatively safe fuel option.

Indeed, nuclear power suffers from the same image issue as air travel. When there's a problem it's headline news, but all of the other times, when things go well, no one cares. With an increasing push to clean our carbon footprint, the world could soon take a different view of nuclear and, by extension, Exelon. 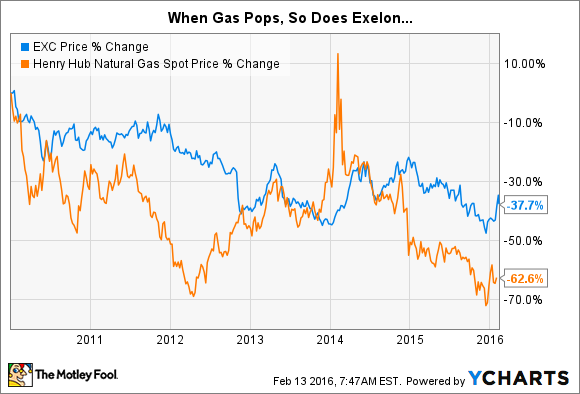 Low gas
A dim view of nuclear power isn't the only reason Exelon's stock is off some 30% over the past five years. In fact, it probably isn't even the main reason. The big issue of late has been natural gas, which makes up a scant 20% of the company power plants. Essentially, natural gas prices that have plumed historical lows have kept a lid on how much electric power companies get paid. That's particularly true in the Northeast, Exelon's prime market, where a high percentage of power comes from natural gas.

The end result is that Exelon's margins have been under pressure for years. For example, in 2010 the company's operating margin was around 25%, and last year it was 15%. And that's the highest the operating margin has been in four years. The relationship between Exelon's stock price and the price of natural gas is pretty interesting, actually. When the price of gas goes up, Exelon's price usually follows.

So the second reason Exelon stock could rise is a prolonged increase in the price of natural gas. However, investors will probably reward Exelon with a higher price before the benefits of improving margins start to show up on the bottom line. So this is one you'll have to watch closely.

Diversification
Although it's impossible to ignore Exelon's nuclear-heavy business model, the company has been changing its business mix around a little. For example, through a series of mergers, the utility has shifted from a 30% regulated utilities/70% power generation mix to something around 50%/50% today. The next big change is the nearly $7 billion deal to buy Pepco Holdings (NYSE: POM). That should leave the company with a 60% regulated utility/40% power generation mix. 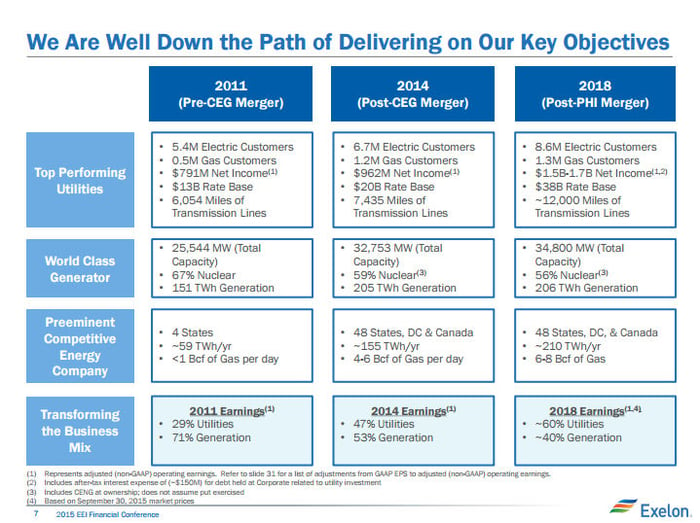 Change has been an ongoing theme at Exelon. Source: Exelon.

Increasing the percentage of Exelon's business that comes from regulated utilities helps to make earnings more predictable. Increasing that percentage should help change the market's perception of the company. However, the Pepco deal, which is really the next big step in this process, is facing significant push back in Maryland and Washington, D.C., where regulators are opposing the deal even after Exelon's concessions.

As long as the Pepco acquisition is in limbo Exelon's stock is likely to face market headwinds. So this is the third big issue to watch today. If the deal gets approved, investors will likely award Exelon a higher valuation as its business gets more predictable. That said, the outcome remains murky today.

Not your boring old utility
Exelon is not a boring utility -- it's really something else entirely. The heavy exposure to nuclear power, its competition with natural gas, and the up-in-the-air merger with Pepco are all issues that you need to be aware of and watch. If anything changes with this trio, for the positive, Exelon's shares are likely to rise.

That said, rising natural gas prices would probably have the most immediate impact on the shares, with the Pepco deal coming in a solid No. 2. The desirability of nuclear power is more of a long-term issue, but it's one of the most important simply because Exelon has bet so heavily on the technology.