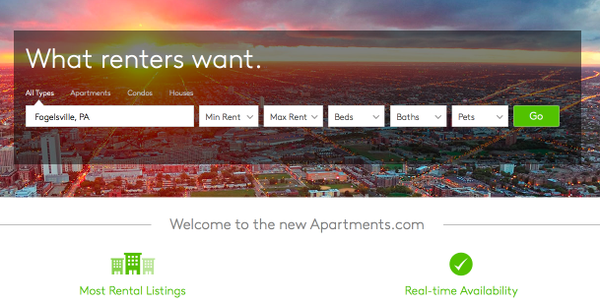 In CoStar Group's (NASDAQ:CSGP) fourth-quarter results on Feb. 24, the leading provider of commercial real estate information, analytics, and online marketplaces showed that it is successfully integrating its online apartments sites -- and that is delivering significant cost savings and sizable profits.

What happened with CoStar Group this quarter?
CoStar Group spent much of 2015 "building the premier marketplace for renting an apartment in the United States," said Founder and CEO Andrew Florance in a press release. CoStar appears to have done just that, as Apartments.com enjoyed more visitor traffic in 2015 than any other apartment rental website, according to comScore. In addition, revenue from Apartments.com jumped 30% year over year in the fourth quarter.

The company is also investing heavily to integrate CoStar, Apartments.com, and Apartment Finder. Those investments are beginning to bear fruit, with fourth-quarter EBITDA (earnings before interest, taxes, depreciation, and amortization) rising to $55 million, a 29% year-over-year increase and a nearly 150% sequential increase from the third quarter of 2015. Adjusted EBITDA -- which excludes stock-based compensation, restructuring charges, acquisition-related costs, and other special items -- also rose 20% year over year to $65 million.

Looking forward
For the first quarter, Costar expects revenue of approximately $196 million to $198 million and non-GAAP net income per share between $0.66 and $0.70.

"We believe our investments in Apartments.com and Apartment Finder in 2015 provide a strong platform for future revenue growth, and are additive to the consistent double-digit revenue growth contribution from our core business," said CFO Scott Wheeler. "We expect the success of our integration and cost management efforts will deliver continued profit improvements in 2016."

Looking even further ahead, management reiterated its long-term revenue and margin guidance.