Instead of investing in the Windows maker for passive income, consider buying these three higher yielding stocks.

Microsoft (MSFT 1.28%) is often considered a solid pick for income investors. The company spent 43% of its free cash flow over the past 12 months on dividends, hiked its dividend 12 years in a row, and pays a forward annual yield of 2.8%. However, Microsoft also trades at 36 times earnings, which is much frothier than the industry average P/E of 23 for the business software and services industry. 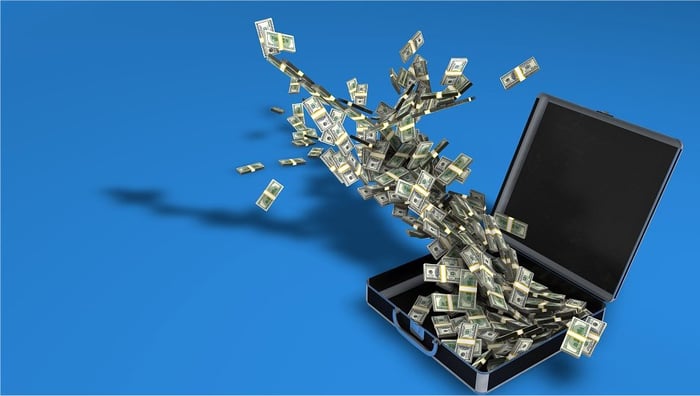 Therefore, investors looking for a conservative tech stock with a high dividend and cheap valuations might want to avoid Microsoft for now. Instead, they should consider three other major tech players instead -- Intel (INTC 0.82%), IBM (IBM 0.33%), and HP Inc (HPQ -1.17%).

Intel
Intel's x86 chips have powered Windows machines for decades. But in recent years, the chipmaker has struggled with slowing demand for PCs and a dismal market share in mobile devices. Those problems caused its Client Computing (PC and mobile) revenue to decline 8% in 2015. But on the bright side, Intel's data center, Internet of Things (IoT), and memory businesses posted positive growth, causing Intel's total revenue to only dip 1%.

On the bottom line, Intel's net income fell 2%, but its EPS improved 1% thanks to buybacks, which consumed 22% of its FCF over the past 12 months. During that same period, Intel spent 39% of its FCF on dividends. The chipmaker currently pays a forward annual yield of 3.5%, but its dividend hikes have been inconsistent. Its quarterly dividend was stuck at $0.23 for nearly three years before being raised to $0.24 in 2015 and $0.26 this year.

Intel stock currently trades at just 13 times earnings, which is significantly lower than the industry average of 19 for broadline semiconductor companies. Looking ahead, analysts expect Intel's data center, IoT, and memory businesses to support its bottom line growth, enabling its earnings to grow at 10% annually over the next five years.

IBM
IBM and Microsoft both rely heavily on large enterprise customers. Both tech giants are also pivoting their core businesses toward higher-growth cloud solutions. That's why Big Blue started integrating some of its middleware into Microsoft's Azure cloud platform in late 2014.

IBM's core problem is its lack of top line growth. The company has endured 15 consecutive quarters of annual sales declines due to sluggish enterprise demand. Last quarter, IBM's sales fell 8.5% annually as revenue from tech services, business services, software, and hardware all fell. However, IBM's revenue from its "strategic imperatives" businesses -- cloud, analytics, mobile, social, and security -- rose 10% annually and accounted for over a third of IBM's full year sales.

On the bottom line, IBM's GAAP net income fell 19% as its EPS dropped 17%. That decline in earnings would have been even steeper if IBM hadn't spent 36% of its $12.9 billion in FCF on buybacks over the past 12 months. IBM also spent 38% of its FCF on dividends, which supports its forward annual yield of 3.9%. Big Blue has hiked its dividend annually for two decades.

IBM currently only trades at 10 times earnings, compared to the industry average of 18 for IT service companies. Analysts expect IBM's earnings to eventually recover, thanks to the divestment of low-margin businesses and investments in higher-growth ones, and grow at an annual rate of 7% over the next five years.

HP
Last but not least, income investors should take a closer look at HP Inc (HPQ -1.17%), which recently split with the other half of HP, Hewlett-Packard Enterprise. HP only sells PCs and printers, which exposes it to many of the same headwinds facing Microsoft and Intel.

However, HP currently pays a forward annual yield of 4.7% and trades at just 4 times trailing earnings, which is much lower than the industry average of 41 for the diversified computer systems industry. HP doesn't have a proven record of raising its dividend yet, but it previously pledged to return 50% to 75% of its FCF to shareholders, with $865 million in dividends and the rest in buybacks within the first year. HP already paid out $221 million in dividends last quarter.

Last quarter, HP's sales and GAAP EPS both fell 12% annually due to weak demand for PCs and printers. HP also announced that it would slash around 3,000 jobs in fiscal 2016 to cut costs. While those numbers look bleak, Wells Fargo analyst Maynard Um recently noted that HP had "underappreciated aspects" -- including managed print services, gaming and premium PCs, higher attach rates for accessories, and market share growth in displays -- which could eventually offset its weak growth in PC and printers.

The key takeaway
Intel, IBM, and HP pay higher dividends and have "cheaper" valuations than Microsoft, but all three companies face major challenges ahead. Therefore, income investors shouldn't blindly buy these stocks -- they should do their due diligence to see if these tech giants' FCF and earnings growth are sustainable in the long run.