Reynolds American (RAI), the second largest tobacco company in America, has rallied more than 30% over the past 12 months. During the same period, its larger rival Altria (MO 1.06%) only rose 9%, while the S&P 500 fell 8%. To understand why Reynolds has been doing so well, we should discuss its core business with five key charts.

Buying Lorillard
A major bullish catalyst for Reynolds is its $29 billion acquisition of Lorillard, which closed last June. That bold move enabled Reynolds to claim 33.8% of the domestic cigarette market in fiscal 2015. In 2014, Reynolds and Lorillard's combined brands controlled 33.6% of the market. Altria claimed 51.3% of the domestic market in 2015 thanks to its flagship Marlboro brand, up from 50.9% in 2014.

However, Reynolds remains much more diversified than Altria, which generates most of its revenue from Marlboro's 44% share of the U.S. market.

Why Newport matters
Newport currently controls over 13% of the U.S. cigarette market. The following chart shows how steadily Newport's market share has grown over the past five years. 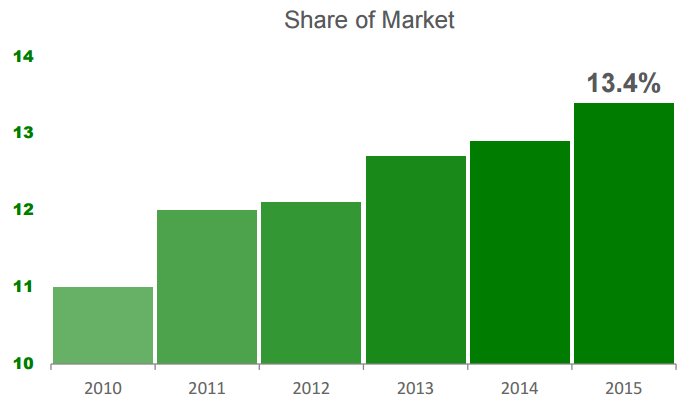 Since Newport is primarily recognized as a menthol brand, its non-menthol brands account for just 1.3% of the market. Reynolds noted that 88% of adult smokers were aware of the Newport brand, but only 33% and 36% were respectively aware of its Menthol Blue and Menthol Gold brands -- indicating that it could diversify Newport's menthol portfolio to reach more smokers. Lorillard also claims that menthol cigarettes have grown from 28% to 34% of the U.S. cigarette market between 2007 and 2015.

Low gas prices and unemployment rates
Selling cigarettes in America, where the smoking rate fell from 23% to 15% between 2000 and 2015, might seem like an unsustainable business model. However, both Reynolds and Altria have traditionally offset shipment slowdowns with price hikes and job cuts.

Growth in e-cigarettes
Reynolds has also gradually diversified its portfolio away from cigarettes to address declining smoking rates. These products include snuff, nicotine gum, and e-cigarettes, which together generated just 11% of Reynolds' 2015 sales.

Reynolds' e-cigarette business, led by its Vuse brand, is arguably its most closely watched "smokeless" unit. The U.S. e-cigarette market is expected to grow at a compound annual growth rate of 33% between 2015 and 2019, according to Research and Markets. Vuse is currently the most popular e-cigarette brand in America by a wide margin.

Reynolds nearly acquired Blu as part of the Lorillard acquisition, but Lorillard sold the brand to Imperial Tobacco Group to avoid antitrust issues. Altria, which has failed to catch up to Vuse with its MarkTen brand, acquired premium e-cig brand Green Smoke in 2014 to broaden its portfolio. 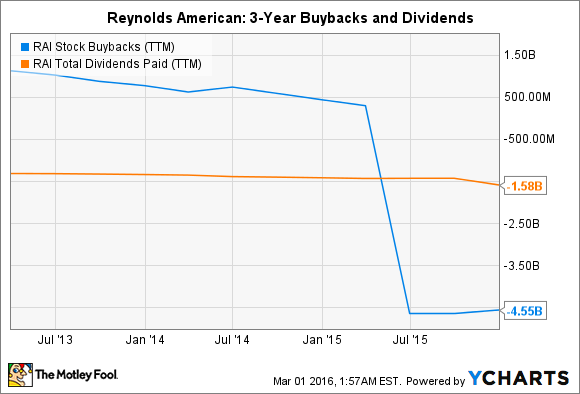 However, the acquisition of Lorillard caused Reynolds' trailing 12 month free cash flow to plunge to just $22 million, and its long-term debt to spike 266% to $16.9 billion by the end of 2015. Although it's unlikely that Reynolds will stop paying its dividend, it could stop raising it annually, as it did between 2007 and 2009. The buybacks, which support its EPS growth, could also be temporarily suspended.

Nonetheless, I still believe that Reynolds American and Altria are solid consumer staples plays which are well-protected from currency fluctuations and overseas turmoil, and will benefit from low gas prices and unemployment rates. However, investors should carefully weigh the long-term impact of declining smoking rates, higher excise taxes, and increased regulations before buying either stock.