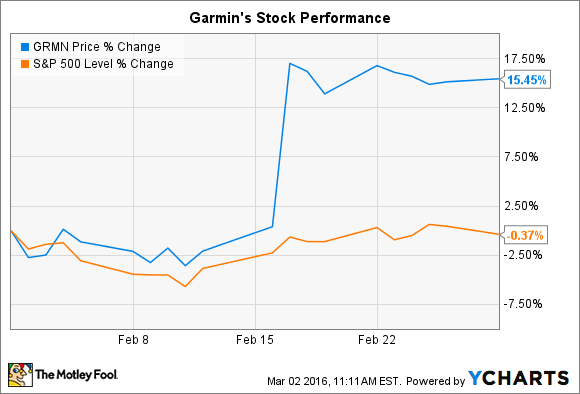 That bounce pushed shares ahead of the broader market for 2016, but the stock is still significantly underperforming through both the past one-year and five-year time periods.

So what: Garmin rose in response to surprisingly strong fourth-quarter results that included a sales decline of just 3% (compared to consensus estimates for a 7% drop) during the competitive holiday shopping season.

A sharp dip in demand for car GPS devices (which are being disrupted by smartphones) was offset by growth in its other segments, most notably personal wearable technology. Profits ticked down to $0.74 per share, but again were well ahead of Wall Street's --  and management's -- expectations.

Now what: CEO Cliff Pemble and his executive team forecast flat sales for 2016, compared to last year's 2% decline. Car GPS units should continue to shrink, yet they'll be replaced by an expected 10% jump in the fitness category that's satisfying surging demand for wearable health trackers.

Fitbit (NYSE:FIT), the clear leader in this space, recently projected much faster growth of around 40% in 2016. Yet Garmin's overall profitability, aided by its more-diverse revenue stream, is stronger at 55% compared to Fitbit's 49%. Add on the fact that Garmin pays out one of the tech industry's biggest dividend yields, and it makes sense that investors might be attracted to the stock. The business appears primed to begin growing again soon, and it represents a rare way for income investors to gain exposure to the wearable tech market.