The volatile retail stock soared last month, but will the good times continue?

What: Shares of consumer electronics retailer Conns (CONN 0.10%) shot up 37% in February, according to S&P Global Market Intelligence, as the company benefited from a major shareholder increasing its bet and recessionary woes easing. The heavily shorted stock also likely got pushed up by a short squeeze as the S&P 500 moved off of its year-to-date lows. 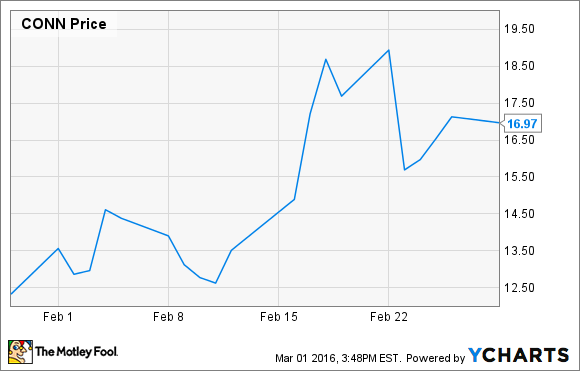 So what: Conn's stock flew out of the gate in February, climbing nearly 20% in the first four sessions, as the hedge fund Anchorage Capital Group upped its stake to 14%.

The always-volatile stock fell after its January sales report came out, revealing that same-store sales declined 2.3% for the month, though they rose 0.6% when adjusting for discontinued product lines. The delinquency rate increased 20 basis points from a year earlier, to 9.9%, an important metric, as Conn's offers financing to its customers, and a major part of its business comes from its credit services.

After a brief pullback, a short squeeze seemed to push the stock up nearly 50% from Feb. 11-18. The S&P 500 bounced off a near two-year low on Feb. 11, gaining more than 4% in that period, and easing concerns about a recession in the process. Since Conn's sells discretionary items to primarily low-income customers, a recession could hammer the stock. The company also said it opened six stores in the fiscal fourth quarter, and plans to open five more stores shortly.

Now what: The stock's volatility continued for the rest of the month as it fell off its monthly high, to close February at $16.97. The month's gains seem to be the result of short-term traders and volatility rather than any fundamental improvement in Conn's performance, though the investment by Anchorage Capital Group bodes well.

Taking the longer view, Conn's is still hovering near four-year lows after lowering its credit standards proved disastrous a few years ago, once customers defaulted on their bills. It's no surprise that short-sellers would raid a company with such a history. Considering that the overall industry in which Conn's operates -- consumer durables retail -- is struggling, and the company's same-store sales are flat, last month's pop may just be noise.