Please ensure Javascript is enabled for purposes of website accessibility
Log In Help Join The Motley Fool
Free Article Join Over 1 Million Premium Members And Get More In-Depth Stock Guidance and Research
By Demitri Kalogeropoulos – Mar 6, 2016 at 11:03AM

The video game publisher's business is changing in important ways.

There was a lot about Activision Blizzard's (ATVI 1.70%) latest quarterly results that seemed like business as usual. The company's Call of Duty franchise dominated the sales charts, and yet again, its collection of hit titles generated market beating revenue (up 7%) and profit growth (up 14%).

However, a closer look at the results reveals a few important trends for investors, takeaways that you wouldn't gather from just the headline numbers. Here are three of the biggest.

Activision posted lower numbers -- $4.6 billion of sales and $0.9 billion of profit for 2015 -- but there is one key metric that set a new all-time high last year: user engagement. Over 80 million gamers played an Activision Blizzard title in the fourth quarter as the monthly user base spiked 25% higher.

One driver behind rising engagement is the fact that Activision has doubled its portfolio of hit franchises in the last two years by adding heavyweights like Destiny, Hearthstone, and Heroes of the Storm. The other big reason is that the company is transitioning from a release-driven model (with nearly all of the revenue being generated within a few weeks of a title's launch) to a year-round model (with spending spread out among periodic updates and expansions). As a result, sales from in-game content and services purchases were $1.6 billion last year, up 57%.

Digital turning point
Those digital sales also carry higher margins than traditional retail, more good news for the business since gamers are embracing that channel. In fact, Activision's digital revenue jumped 34% during the fourth quarter and helped push the segment to over 50% of overall sales last year for the first time. Activision is now officially more of a digital seller than a traditional retailer.

The company performs better than peers at generating consistently high profit margins from these sales, too. Over the last 12 months, Activision's operating margin was just under 30% of sales, compared to 18% for rival Electronic Arts. 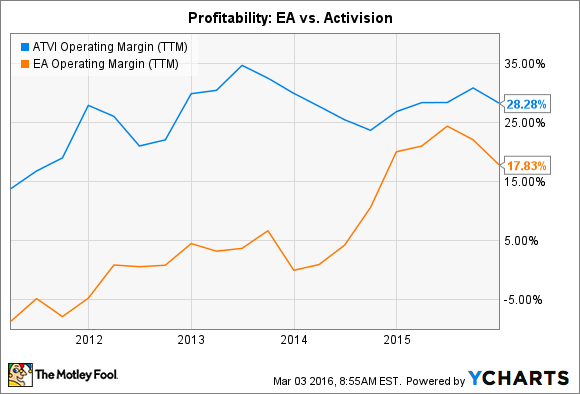 Weakness in the casual segment
Activision's casual games, Skylanders and Guitar Hero, didn't meet management's expectations over the holiday quarter. Three years after creating the profitable toys-to-life gaming category -- and defending it against rivals like Disney -- competition from the House of Mouse and others finally took a meaningful bite out of Activision's dominant Skylanders lead. With Guitar Hero, meanwhile, the company apparently misjudged casual gamers' openness to putting down their smartphone and playing a quick game on a PlayStation 4 or Xbox One. 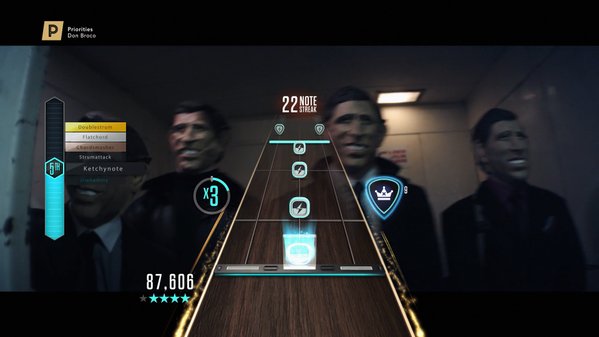 But Activision is set to become a huge force in mobile gaming since recently acquiring Candy Crush owner King Digital and its 474 million active monthly users. The challenge ahead involves keeping that huge base engaged while boosting average revenue per player though in-game micro purchases.

That push into mobile will likely make 2016 a record year for Activision's business, since management is targeting over $6 billion of revenue and $2 billion of operating income. Looking further out, CEO Robert Kotick sees a much bigger market that's driven by expanding the audience away from just the gamers who are interacting with its franchises into a bigger pool of viewers. Executives look at their properties as akin to those owned by the NFL or NBA, they explained in a conference call last month. From that perspective, revenue from advertising, tournament play, licensing and merchandising, and even pay-per-view all represent major potential sources of growth in the next five years.

Demitrios Kalogeropoulos owns shares of Activision Blizzard and Walt Disney. The Motley Fool owns shares of and recommends Activision Blizzard and Walt Disney. We Fools may not all hold the same opinions, but we all believe that considering a diverse range of insights makes us better investors. The Motley Fool has a disclosure policy.