Goldman Sachs (NYSE:GS) is considered to be a top-notch investment bank by many experts. In fact, Warren Buffett once referred to his investment in Goldman as a "bet on brains." With the market weakness so far in 2016, particularly in the financial sector, is Goldman Sachs a good stock to buy now? Here are four charts that could help you make that decision.

A significant portion of Goldman Sachs' revenue comes from advising companies on mergers and acquisitions, as well as underwriting equity and debt offerings.

While some experts are calling for reasonably strong M&A activity, particularly in the energy sector, the global economic uncertainty and volatile stock market have put a damper on IPO activity. In fact, the recent data is quite alarming. 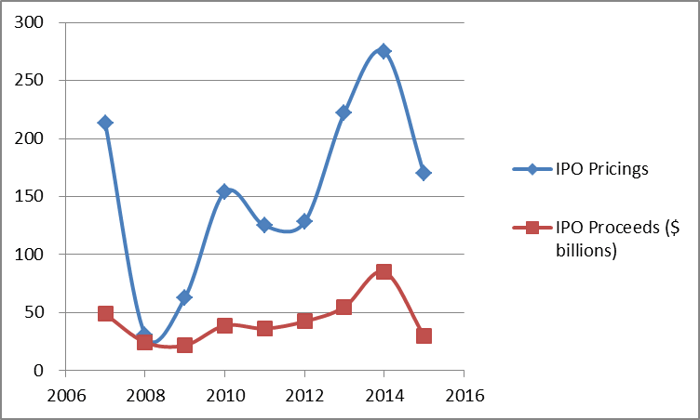 But, shares are on sale
Now, there is no question that Goldman Sachs and the overall financial sector are facing headwinds. As we've already seen, IPO activity is weak. Further, low oil and gas prices could potentially create a wave of loan defaults, and the extent to which this could happen is anyone's guess at this point. Plus, global uncertainty and the recent drop in the markets have many experts claiming that a recession is imminent, which has investors on their toes -- particularly when it comes to bank stocks. After all, look what the last recession did to the sector.

While these risks are certainly legitimate, I feel that Goldman's stock price more than adequately factors in any risks and provides a nice margin of safety. In fact, as you can see in this chart, Goldman Sachs trades for valuation multiples not seen since 2012. 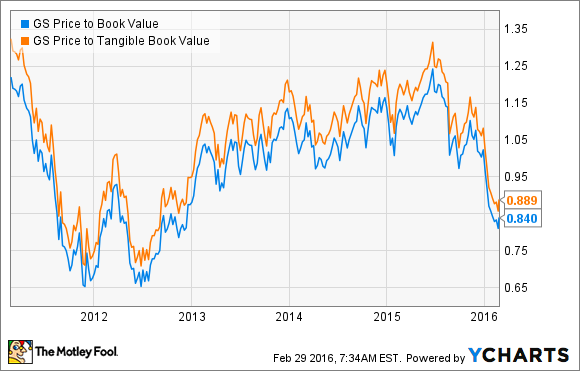 Not for dividend seekers
Although dividend increases in recent years combined with 2016's market weakness has created a reasonably strong 1.7% dividend yield, Goldman Sachs has never been a high-dividend stock. In fact, the only times since 1999 that the yield has climbed higher than 1.5% were due to rapid plunges in the stock price. Historically, Goldman's yield has been in the 0.5% to 1% range. 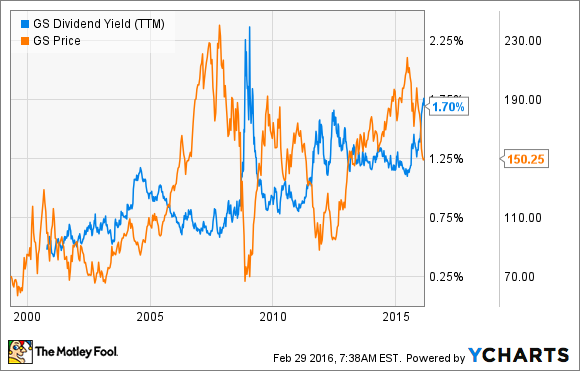 So, although Goldman Sachs has a pretty strong history of increasing its dividend, it will likely never be a great income stock. If you rely on income from your investments to cover expenses, Goldman Sachs is not (and probably will never be) for you. However, as we'll see shortly, the company has other ways of returning capital to shareholders.

Creating shareholder value -- the easy way
Rather than paying high dividends, Goldman Sachs prefers to return capital to shareholders by repurchasing stock, and it has gotten rather aggressive in the past, especially when management feels that shares are undervalued. In fact, during any 12-month period over the past five years, Goldman has bought back at least $3 billion worth of its own stock. 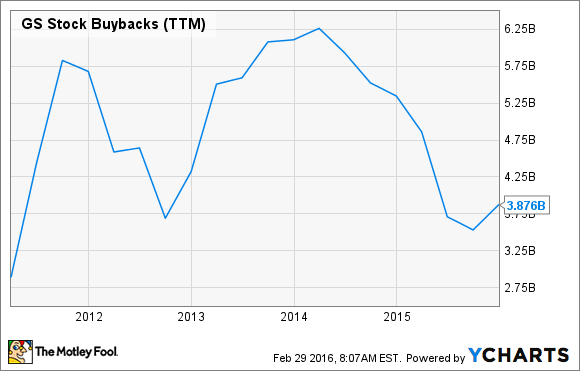 This is particularly important to investors now, with shares actually trading for less than the value of Goldman's tangible assets. As of this writing, Goldman sells for a discount of about 8% to its tangible book value of $161.64. The company has 63.2 million shares remaining on its authorized repurchase plan, and if those shares were repurchased at the current price, it would translate to $855 in instant value for shareholders. I wouldn't be surprised to see the company act aggressively while the share price is so attractive.

The bottom line on Goldman Sachs
While there are some risks involved with Goldman Sachs, I believe this is an excellent time to buy for a long-term investment. Goldman Sachs' management has proven its ability to make money and create shareholder value no matter what the economy is doing, and the coming years will be no different.

I'm not saying Goldman Sachs' stock price can't go down more -- it absolutely could. Goldman's investors may not be thrilled with their purchase a month from now, or even in a year from now. No matter what the market does in the near term, over a long holding period, Goldman Sachs is a winner.